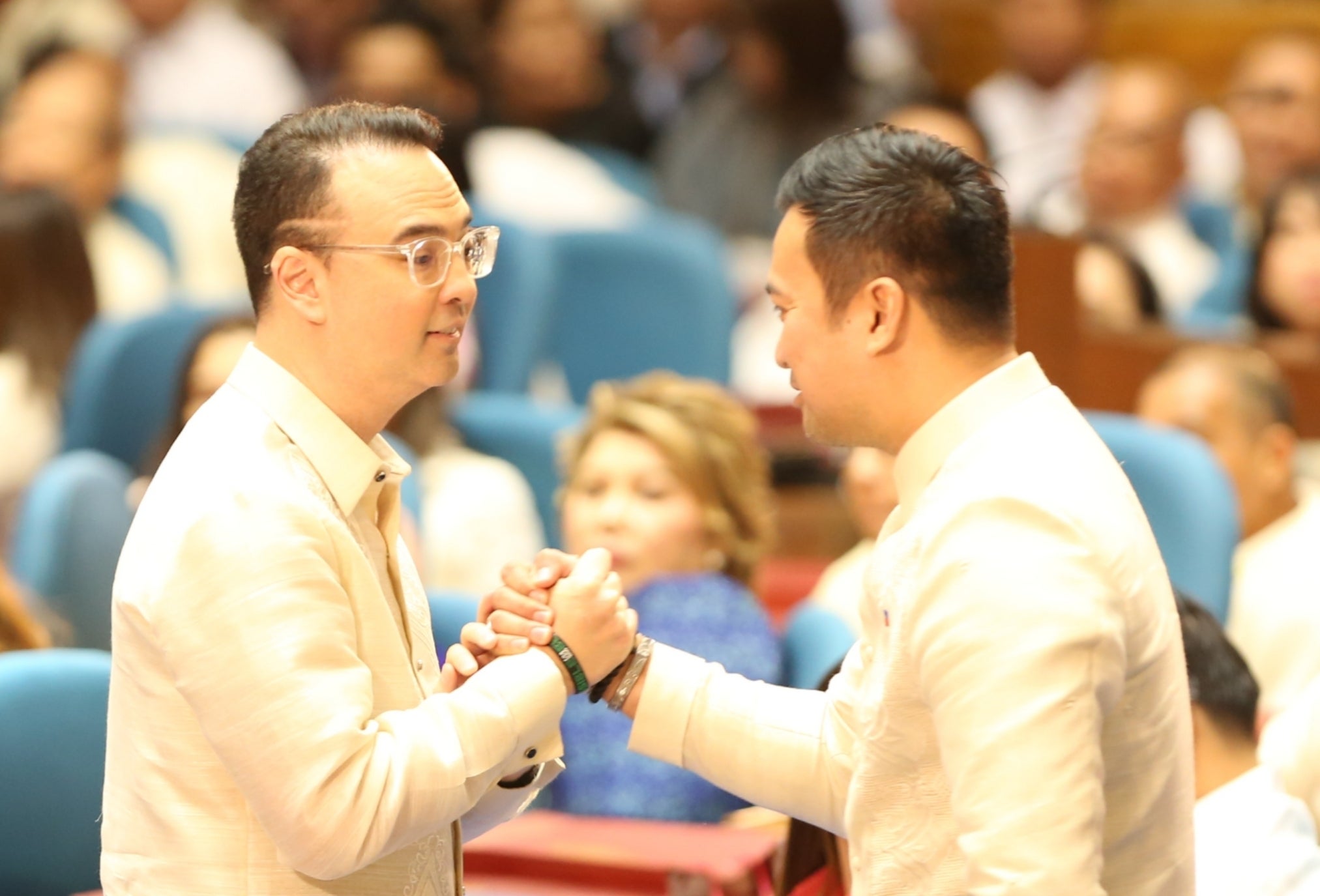 TERM-SHARING Representatives Alan Peter Cayetano (left) and Lord Allan Velasco seal the term-sharing arrangement suggested by President Duterte for the speakership. Cayetano is Speaker for the first 15 months of the 18th Congress and will be succeeded by Velasco in the remaining 21 months. —JOAN BONDOC

At the House, three of Cayetano’s rivals—Marinduque Rep. Lord Allan Velasco, Leyte Rep. Martin Romualdez and Davao City Rep. Paolo Duterte—nominated him to lead the 300-strong chamber in an anticlimactic conclusion to weeks of uncertainty and closed-door maneuverings.

Cayetano, addressing his peers upon taking his oath as the 22nd Speaker, vowed a “relevant, responsible and reliable” House.

The former senator and foreign secretary received 266 votes against the 28 cast for his lone rival, Manila Rep. Bienvenido Abante Jr., who was to be elected minority leader by a coalition of opposition and independent forces in the chamber, one of few surprises on Monday morning.

Under House tradition, Cayetano and Abante voted for each other during the election.

There were two abstentions, including from Buhay Rep. Lito Atienza, and a no vote from Albay Rep. Edcel Lagman, who was displeased that “installation of a minority leader has been brokered and approved by the supermajority coalition.”

Romualdez assumed the post of majority leader, while Duterte and 10 others, including Representatives Loren Legarda of Antique, Aurelio Gonzales Jr. of Pampanga, Luis Raymund Villafuerte Jr. of Camarines Sur, Evelina Escudero of Sorsogon, and Johnny Pimentel of Surigao del Norte, were installed as deputy Speakers.

Support for Cayetano came from all the major political blocs, including his own Nacionalista Party, as well as the ruling Partido Demokratiko Pilipino-Lakas ng Bayan (PDP-Laban), Nationalist People’s Coalition, and even half of the formerly dominant Liberal Party.

He also got the votes of former Speaker Pantaleon Alvarez and Davao City Rep. Isidro Ungab, who had been fielded in the speakership race by the so-called Duterte Coalition led by Paolo Duterte and Davao City Mayor Sara Duterte.

“In the Davao Coalition, we respect the decision of the President,” Representative Duterte told lawmakers at a breakfast meeting ahead of the opening of the 18th Congress.

In nominating Cayetano, Duterte teased the body by pausing for several seconds before revealing his choice of someone who could “ably and fearlessly represent the House of Representatives in the international arena, the gentleman from the distinguished district of… Taguig-Pateros.”

The President’s son, however, expressed his misgivings about the term-sharing agreement between Cayetano and Velasco, which nevertheless he acknowledged as an agreement between his father and the two aspirants for the speakership.

“I’m against any term-sharing. However, if the Speaker resigns after 15 months, then we have to elect a new Speaker,” the younger Duterte said.

Under the term-sharing deal, Cayetano would lead the House for the first 15 months of the 18th Congress, to be succeeded by Velasco in the remaining 21 months of that assembly.

Velasco praised Cayetano as “a lawmaker with integrity” who is “true to his word” and “will institute reforms” in the House.

Albay Rep. Joey Salceda, who on Sunday raised the possibility of a dark horse throwing a wrench on the Cayetano-Velasco deal, said all camps with designs on the speakership were thrown in disarray after Mr. Duterte threatened to skip his own State of the Nation address (Sona) unless they followed his cue on the Cayetano-Velasco agreement.

“Basically, the message is that according to the President, ‘I won’t come if you are unruly,’” he said.

Salceda said the President did not want a repeat of the power struggle at the House right before his address last year, when Alvarez was ousted and replaced by Gloria Macapagal-Arroyo.

“So we behaved,” he told reporters.

“Effectively the leadership has yielded to Speaker Cayetano,” he said, adding: “This is the House of Cayetano.”

Asked if the President was pleased that the House chose Cayetano, presidential spokesperson Salvador Panelo said, “It’s not a question of being pleased. ‘You came for me, you asked for my help, I’m giving it you. Then you do whatever you want to do with that.’” 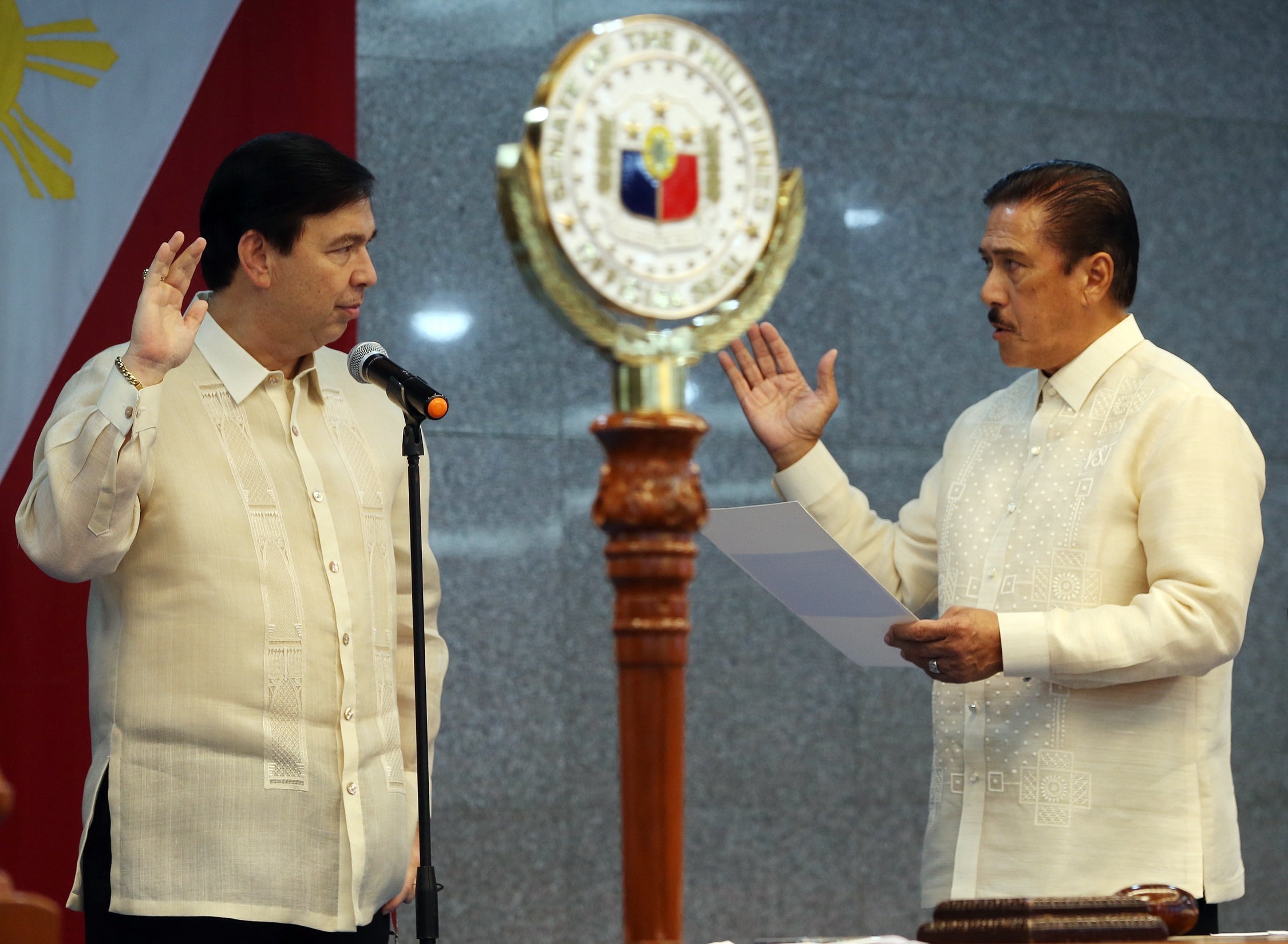 At the Senate, Sotto said in a speech to his colleagues: “To reiterate the vow that I made when I first took this post, we will continue to nourish the trust and confidence that our country has bestowed on us by ensuring that this Senate will remain cooperative but independent, balanced, transparent and sincere.”

“I did not become your superior; I am simply a presider of your sessions. Any concept other than this is misplaced and unwarranted,” he also said.

Sotto added, “We are not prosecutors. We are not judges. Our hearings had been known to be precursors of high blood pressure, heart attacks, strokes and even self-injury. It should not be the case.”

“I may be friends with the President since 1988, but that doesn’t mean that we will take everything that the Palace will give us. We have our own perspective of things. We will remain independent.”

Speaking with reporters afterward, Sotto said, “I would like to retain, if not surpass, the trust and confidence given by our countrymen to the [Senate during the] 17th Congress.”

Sen. Franklin Drilon will also continue to lead the minority bloc, which is down to four members including himself.

Sen. Risa Hontiveros said when sought for comment about the reduced minority, “Our energy and appetite are high, to continue pushing for the protection of human rights, upholding the rule of law and defending our democracy even while we seek issue-based alliances with the independent-minded members of the majority.”

The other minority senators are Leila de Lima, who is currently detained, and Francis Pangilinan. —WITH A REPORT FROM JULIE M. AURELIO