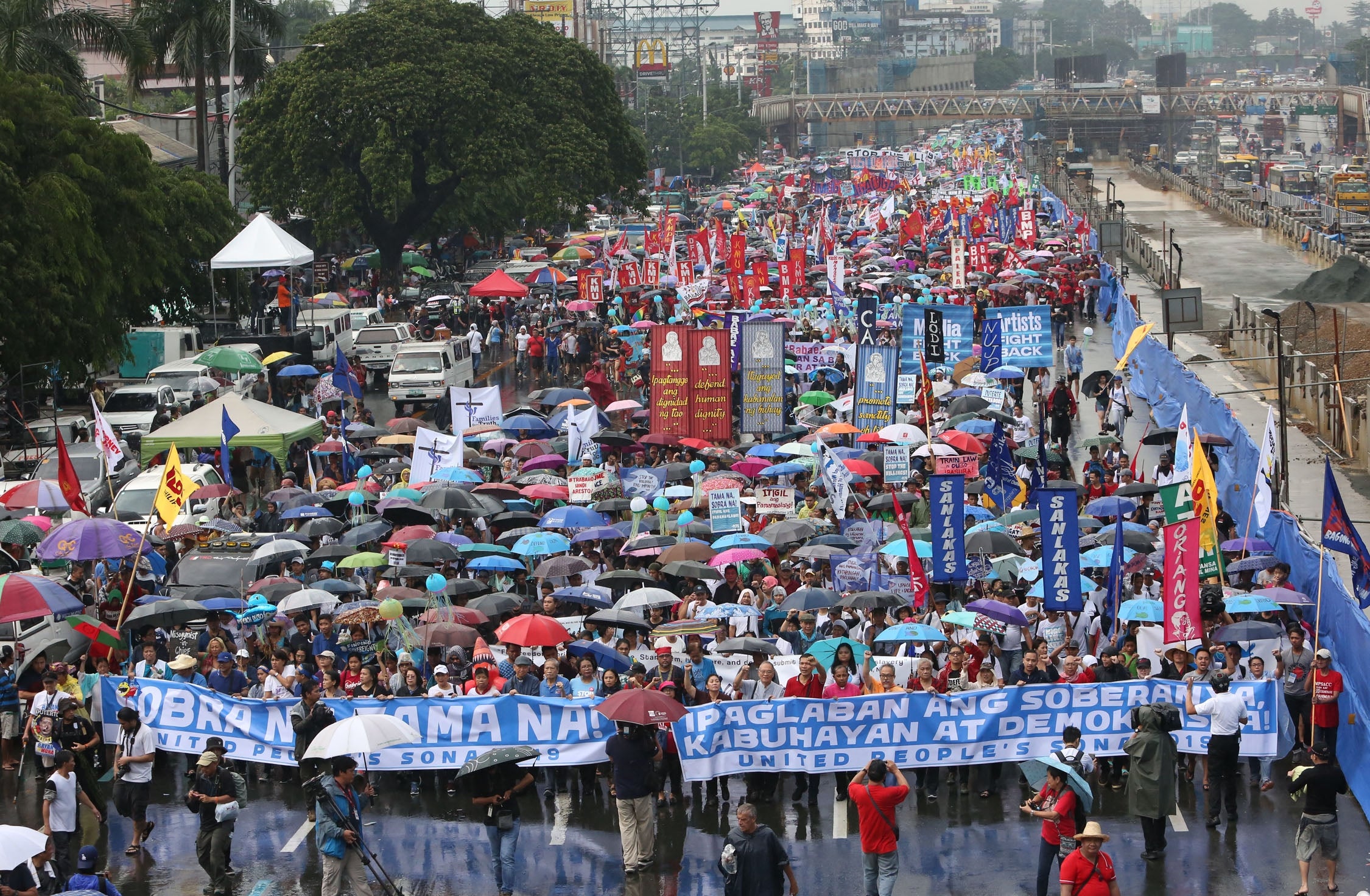 SOVEREIGNTY Protesters crowd Commonwealth Avenue as they denounce the government’s stand on China and other issues. —MARIANNE BERMUDEZ

MANILA, Philippines — Blue was the color of the day on Monday at protest rallies in Quezon City that featured a wrecked fishing banca, a life-size octopus mock-up between two sharks representing Chinese and US interests, and a “syokoy” (merman) effigy of President Rodrigo Duterte.

The color was meant to highlight the country’s sovereignty, primarily over the West Philippine Sea, which is being claimed by China.

“Atin ang Pinas, China layas (The Philippines is ours. China leave)” was the call of members of Bagong Alyansang Makabayan and rights groups, farmers from Central Luzon and Southern Tagalog, and indigenous people who occupied the streets leading to the Batasang Pambansa Complex where Mr. Duterte was scheduled to deliver his fourth State of the Nation address (Sona).

At a protest rally at the Commission on Human Rights earlier in the day, hundreds of fisherfolk in blue shirts paraded a banca resembling Gem-Ver 1, the fishing boat that was rammed and sunk by a Chinese fishing vessel in Recto Bank on June 9. 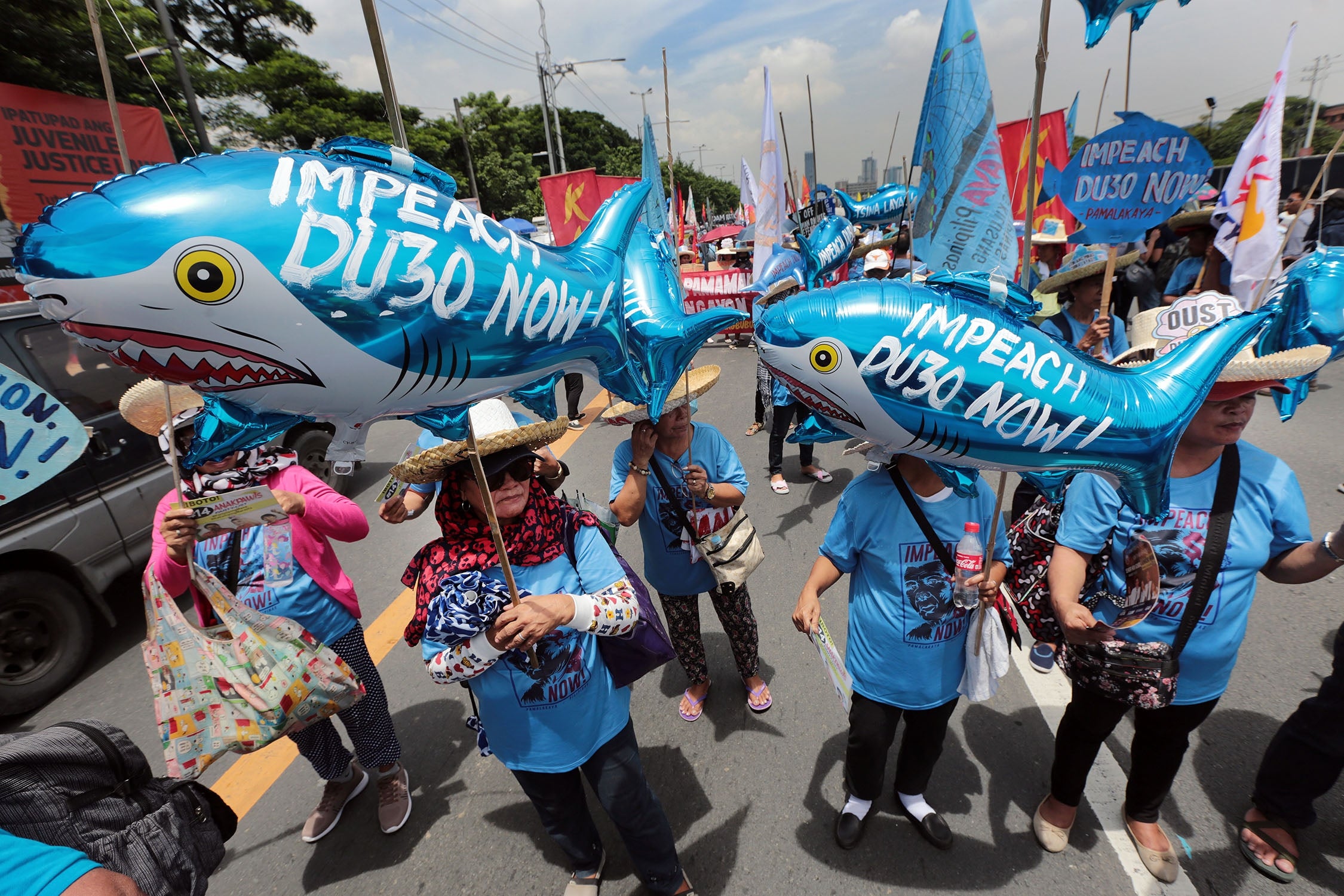 On the sidelines of the Sona, former Chief Justice Maria Lourdes Sereno said Mr. Duterte had “killed” every single democratic institution since he took office in 2016.

Indigenous people’s groups from Mindanao slammed the recent order of the Department of Education (DepEd) to suspend the permit to operate 55 “lumad” (indigenous peoples) schools in Davao region, citing their alleged “left-teaching ideologies.”

In Quezon City, members of Rise Up for Life and for Rights also joined the rally, holding pictures of their loved ones who were killed in the drug war. They appealed for justice and an end to the killings.

More than 2,000 teachers from public and private schools marched under heavy downpour, brandishing blue lifesavers that bore calls for a base pay of P30,000 for teachers, P31,000 for instructors, and P16,000 for rank-and-file government workers.

“Raising the pay of civilian employees is a step toward strengthening the social services sector of the government, which performs the primary mandate of the state,” said Vladimer Quetua, treasurer of the Alliance of Concerned Teachers.

At 900,000, public school teachers are the largest segment of the government bureaucracy.

At a forum in Baguio City, former Social Welfare Secretary Judy Taguiwalo said this year’s national budget saw more allocations for military and infrastructure projects than those for social work and education. This, she said, reflected Mr. Duterte’s priorities.

About 200 protesters staged a rally in the city.

“China is like a shark that preys on small fishes like us, but we should not cower in fear. Let us find strength in our unity,” said Sarah Dekdeken, secretary general of the militant Cordillera Peoples Alliance.

Militant groups marched in the cities of Naga, Masbate, Sorsogon and Legazpi to call for the ouster of the President and to protest his pro-China stance.

In Naga, the rally snarled traffic on the streets going to the city center.

Rain failed to stop the march of about 500 members of different groups from Albay’s Daraga town to Peñaranda Park in Legazpi. They demanded an end to extrajudicial killings.

In Cebu City, protesters marched from Fuente Osmeña Circle and converged at a junction of Colon Street to denounce Mr. Duterte’s position on the West Philippine Sea.

Groups aligned with Bayan brought with them a mini-dragon effigy of Mr. Duterte caped with flags of China and the United States.

Jaime Paglinawan, chair of Bayan Central Visayas chair, said the group was pushing for the President’s impeachment for allegedly violating the Constitution after he allowed Chinese fishermen to exploit the Philippine exclusive economic zone.

On Panay Island, more than 4,000 people joined rallies in their version of the Sona.

About 2,000 students, farmers, jeepney drivers, priests, nuns and seminarians showed up in Iloilo City, 1,000 each in Roxas City in Capiz and the capital town in Kalibo in Aklan, and around 100 in San Jose in Antique.

In Iloilo City, protesters at Sunburst Park burned an effigy of Mr. Duterte depicted as a monster.

Another effigy of the President was burned during a People’s Sona rally of about 3,000 people at the public plaza of Bacolod City. It carried an armalite, representing the massacres and arbitrary killings in Negros Occidental, said Michael Dela Concepcion, Bayan-Negros secretary general.

“A zero grade for him. We will oust him,” said Danilo Olayvar, secretary general of Hugpong sa mga Mag-uumang Bol-anon.

Militant groups in Tacloban City also burned an effigy of the President.

In Davao City, a lumad leader said the Duterte in Malacañang was not the mayor that they used to love.

“The Duterte that we used to know fought for us. That is why we are still baffled why he wanted our schools shut down,” said Datu Ginom, a Manobo chieftain from Talaingod town in Davao del Norte.

“We want to go home,” read a streamer displayed inside the Peace Convergence Hall of Mindanao State University (MSU) Institute for Peace and Development in Mindanao, where displaced Marawi residents held the state of the Marawi “bakwets” (Sombak) to tell the government what they feel.

Carrying her month-old baby, Sittie Hana Abdul Moner, 42, took part in the Sombak to express her wish to return home. “We want to go home to Datu Dansalan where our house had been burned down. We want to get back on our feet,” Abdul Moner said.