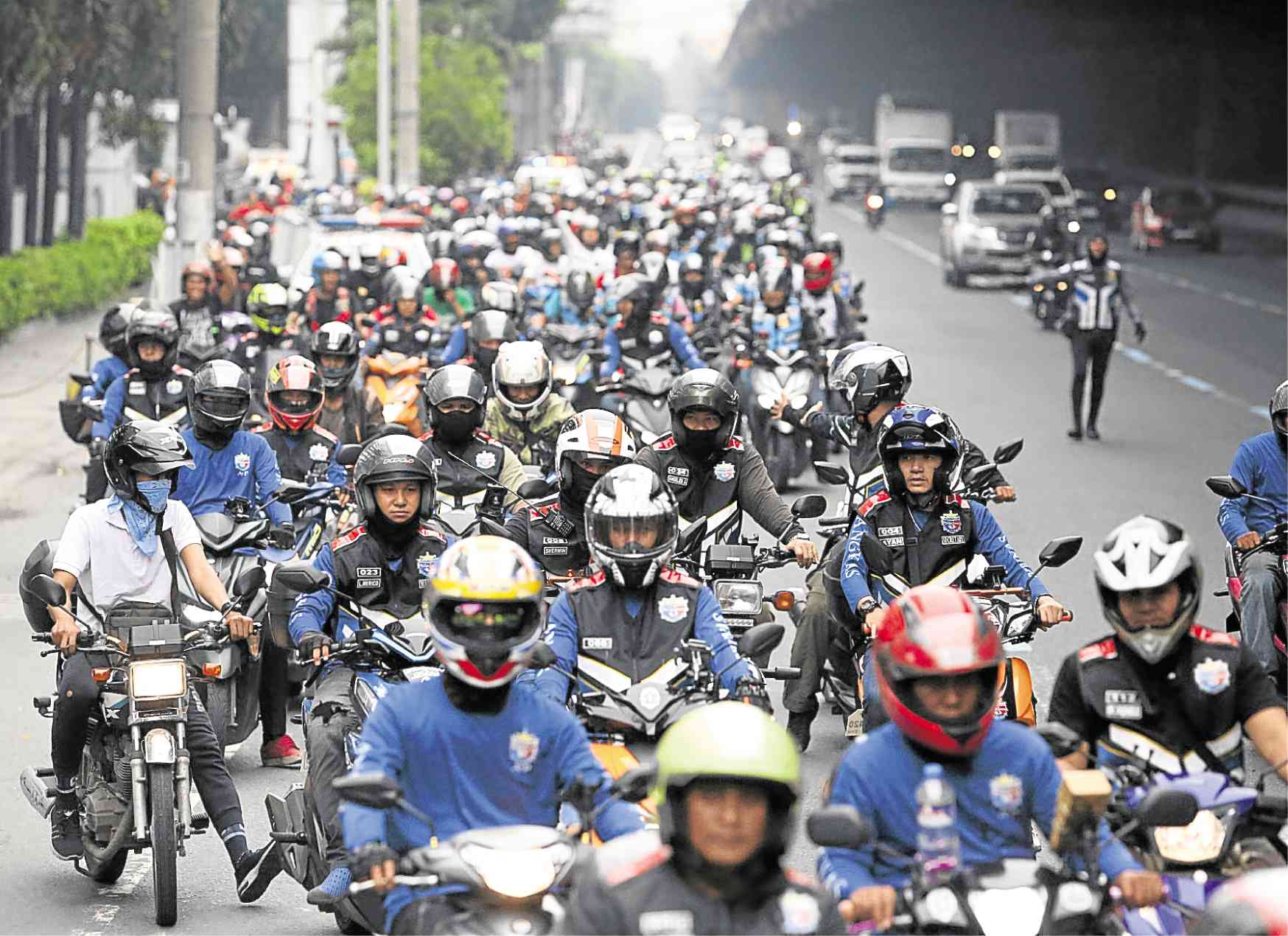 UNEASY RIDERS Motorcycle owners join a motorcade to protest Skyway officials’ move to ban vehicles with an engine displacement of below 400cc from a portion of Osmeña Highway. — MARIANNE BERMUDEZ

MANILA, Philippines — Despite an agreement to defer the enforcement of a ban on motorcycles with an engine displacement of below 400 cubic centimeters on a portion of Osmeña Highway, several riders were still apprehended on Monday by policemen.

A day earlier, Jobert Bolanos, chair of the Motorcycle Rights Organization (MRO), said that after a dialogue, Skyway O&M Corp. (Somco) officials deferred the implementation of the ban on sub-400cc motorbikes from the Magallanes Interchange in Makati City up to Sales Interchange in Pasay City and vice versa subject to certain conditions.

In a Facebook post on Monday, Bolanos accused the Philippine National Police’s Highway Patrol Group (HPG) of “meddling” in the issue.

“[Skyway] already gave us a temporary pass while we are searching for a solution [to] this problem. Then we learn that your men are taking advantage of the situation?” he said to Police Brig. Gen. Roberto Fajardo, the PNP-HPG chief.

According to Bolanos, he did not know how many riders were apprehended as he asked those who were slapped a fine to get in touch with the group.

The Inquirer tried to get Fajardo’s reaction but at press time, he had yet to respond.

Most of the motorcycles in the country are equipped with 100cc to 200cc engines that are more affordable. A popular motorcycle brand with a 471cc engine, for example, is priced at P360,000 compared to its 109cc version that can be bought at less than P50,000.

Last week, Somco officials and the Toll Regulatory Board, through its spokesperson Alberto Suansing, said that by enforcing the ban, they were merely implementing Republic Act No. 2000, which prohibits sub-400cc motorcycles on tollways.

They justified the move as a “safety precaution” against the increasing number of accidents involving the two-wheelers.

Citing its data, Skyway said that from January 2016 to June 2019, it recorded a total of 373 road crashes involving motorcycles from Magallanes to Sales interchanges in both the northbound and southbound lanes. Of the total, 130 led to injuries while five caused fatalities.

Bolanos, however, said he did not see the “logic and math” behind Skyway’s figures.

According to data from the Metropolitan Manila Development Authority (MMDA), of the over 100,000 vehicles that passed through Osmeña Highway last year, private cars accounted for the majority at 56,000 while motorcycles numbered 30,000.

“Sure, it will declog Osmeña Highway of motorcycles, but you will just create a bottleneck elsewhere,” Bolanos told the Inquirer, noting that the alternate routes Skyway had suggested already had high traffic volume in the first place.

Chino Roces Avenue, for instance, was dotted with schools, condominiums, offices and other commercial establishments. Sales Road and Andrews Avenue were near Ninoy Aquino International Airport.

During the dialogue, Skyway admitted it had not consulted the Pasay and Makati local governments, which would be greatly affected by the new traffic scheme.

Motorcycle groups led by MRO were in talks with traffic management officials of the two cities and the MMDA on how they could address the looming “motormageddon and carmageddon.”

“By banning us from Osmeña, they’re creating a traffic nightmare affecting not just [us] but everyone else on the road,” Bolanos said.