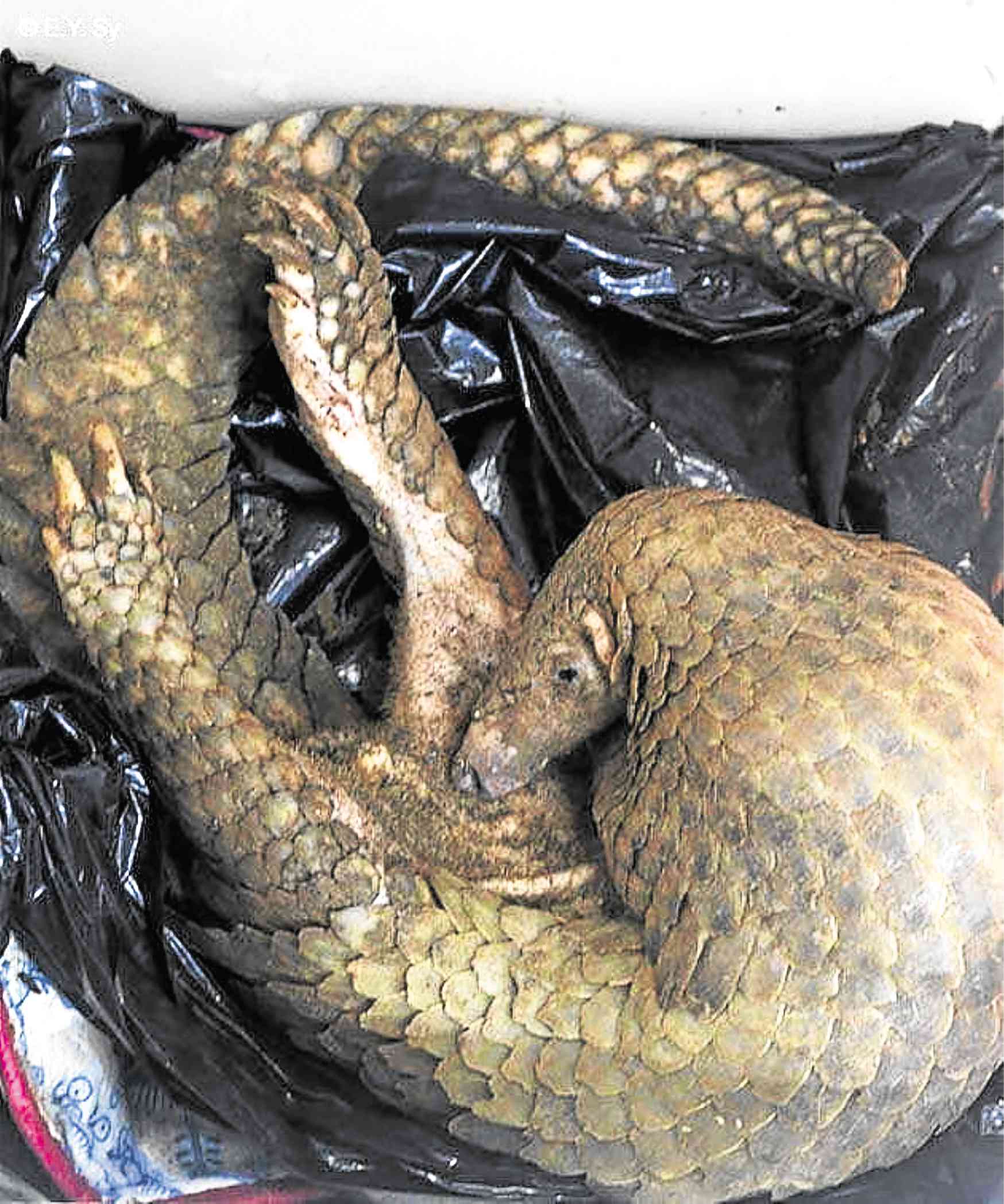 TRAFFICKING CASUALTY This pangolin, part of the 10 rare mammals rescued from poachers at a checkpoint in Tagaytay City last month, did not survive the stress of being taken out of its habitat in Palawan province. —EMERSON SY/Contributor

A court in Tagaytay City convicted three men of violation of the wildlife protection law after they were arrested last month for possessing 10 Philippine pangolins (Manis culionensis), of which seven had died before the rare and sensitive mammals were released back into the wild.

The case marks the first “successful conviction” of wildlife traffickers from Palawan province, from where the traders took the animals, according to conservationists. Law enforcers chanced upon them in a routine checkpoint in Tagaytay City, Cavite province, on June 28.

The pangolins, found in a cramped cage in a van compartment, were initially taken to a Department of Environment and Natural Resources (DENR) rescue center, where they were fed and treated for their bruises. Only three, however, survived.

This was why conservationists could not help but express their frustration over the penalty that the court had imposed—three months of imprisonment and a P20,000 fine for each poacher.

“The penalty given is just a slap on the wrist,” said Emerson Sy, president of the Philippine Center for Terrestrial and Aquatic Research (PCTAR), a private conservation group.

“Wildlife crime is still not considered a serious crime in the country and the light penalty given to these wildlife criminals is a clear testament,” he added.

Quoting from a two-page order issued on July 18, Froilan Remulla, chief enforcer of the DENR in Cavite, on Monday said Judge Liezl Rosario Mendoza of the Municipal Trial Court in Cities Branch 1 convicted fishermen Jorlan Torrequinada and Victor Equiza, both from Roxas town in Palawan, and Simfroso Salazar, a driver from Calatagan town in Batangas province.

Remulla said this was after the respondents pleaded guilty to violating Section 27 of Republic Act No. 9147 or the Wildlife Resources Conservation and Protection Act.

Under the law, illegal wildlife “collection, hunting and possession” has a penalty of two to four years imprisonment and a fine of P30,000 to P300,000.

But Remulla said the court had given weight to the respondents’ guilty pleading.

“These are poor people [from Palawan], probably why they have engaged in such activity. At the very least, this would deter [other traffickers],” he said.

To Sy, however, it was not enough that the three men had pleaded guilty. He said they should also cooperate with authorities in tracking down wildlife trade financiers, who sold pangolins primarily for its meat.

The 2004 Philippine national red list of native species listed Philippine pangolins as “vulnerable” species. Conservationists just last year had proposed to move up its classification to being “endangered,” pending the approval of the DENR secretary.

PCTAR monitoring showed that there were 12 instances of pangolins confiscated or rescued from smugglers in 2018 and three cases recorded so far this year. Of these, only the most recent case in Tagaytay had recorded an arrest and resulted in court conviction.