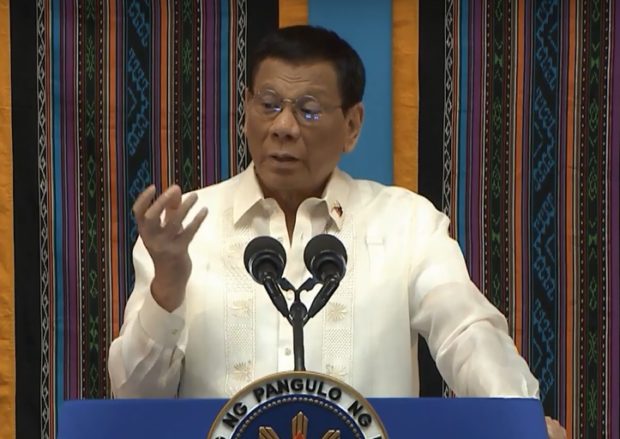 President Rodrigo Duterte during his fourth State of the Nation Address at the Batasang Pambansa in Quezon City on Monday, July 22, 2019. SCREENGRAB FROM
RTVMalacañang YouTube

MANILA, Philippines—President Rodrigo Duterte on Monday raised to P1.3 million the bounty for the killers of the 4 policemen in Ayungon, Negros Oriental.

The officers were killed in an ambush by suspected communist rebels last week.

Malacañang announced over the weekend that Duterte has offered a P1-million reward for the arrest of suspects behind the ambush of the policemen.

Speaking to reporters after his fourth State of the Nation Address (Sona), Duterte announced that he would add another P300,000 if the leader of the perpetrators was presented to him dead.

The President visited the wake of Col. Relebert Beronio and Patrolmen Raffy Callao, Ruel Cabellon and Marquino de Leon, and posthumously conferred on them the Order of Lapu-Lapu.

The slain policemen were intelligence officers of the 704th Mobile Force Company under the Regional Mobile Force Battalion in Central Visayas.

They were verifying reports that New People’s Army (NPA) rebels were seen in Barangay Mabato when they were ambushed at Sitio Yamot on Thursday last week.

Their firearms and motorcycles were seized by the rebels, police said.