Duterte critics ask China: Get out of PH 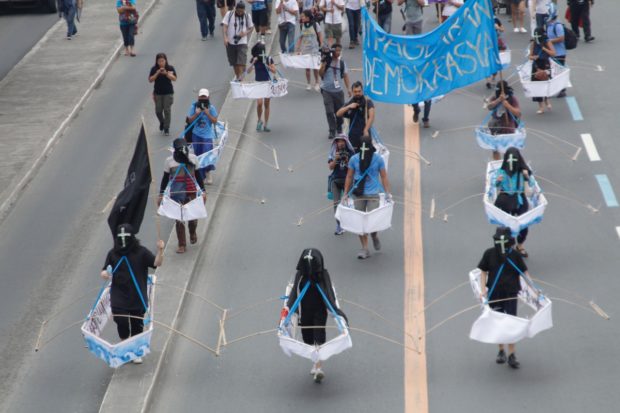 MANILA, Philippines – There are issues that militant groups have repeatedly raised every State of the Nation Address (Sona), regardless of who the country’s president is — from accusations of United States-sponsored imperialism, woeful labor conditions, and human rights abuses.

These issues were still brought up as President Rodrigo Duterte was making his fourth Sona on Monday, but apparently, this year was special. Instead of seas of red, Commonwealth Avenue was filled with protesters wearing blue shirts — apparently an ode to an “under the sea” theme.

This year’s focus was on upholding the country’s sovereign rights over the West Philippine Sea, amid recent incidents involving China. Protesters already claimed that it was the biggest anti-China protest.

According to Bayan Muna chair Neri Colmenares, they were becoming speculative of what Duterte stands to gain — or has already gained — from its alliance with China, after he initially stressed that the disputed area belongs to the Philippines.

Duterte recently said that China can fish in the country’s exclusive economic zone — an action that his critics deemed as an impeachable offense.

Former Chief Justice Maria Lourdes Sereno, who was impeached under Duterte’s term, said that revelations of a verbal agreement with Chinese President Xi Jingping is alarming.

The views of Colmenares and Sereno reflected the sentiments of other protesters. Most of the placards and protest materials called on Duterte’s administration to assert rights over the country’s territorial waters.

Some of the rallyists’ props also mimicked Gem-Ver 1, the local fishing boat which was sunk in a collision with a Chinese vessel last June 9 at Recto Bank — well within the country’s exclusive economic zone. Others wore caricatured and vicious versions of sea creatures, likening them to the government.

References to the sea were well placed in the protest. In fact, the effigy created by Bagong Alyansang Makabayan (Bayan) named “Dutershokoy” showed Duterte as an evil merman with a flag of China on the right hand and a gun on the left.

Earlier in the day, urban poor group Kadamay stormed the National Housing Authority (NHA) office, renewing their call for a decent socialized housing. Kadamay chair Bea Arellano said the housing units they occupied in 2017 are still without basic services such as electricity and water.

On the other side of the road, members of Alliance of Concerned Teachers, Anakpawis, Anakbayan, Bayan Muna, Gabriela, Karaptan, Kabataan, and other militant organizations demanded that government improve the lives of Filipino workers.

They also called for justice amid issues of extra-judicial killings that came with the administration’s bloody war against illegal drugs.

The groups marched towards St. Peter’s Parish around 12:30 p.m., amid torrential rains and strong winds against them.

Diokno meanwhile read a paraphrased version of a German poem, chiding Filipinos who refuse to react against Duterte’s regime even with the different issues at hand.

Diokno paraphrases a poem written during the time of Nazi Germany, throwing shade on people who refuse to criticize the Duterte administration. #Sona2019 @inquirerdotnet pic.twitter.com/vECIf466Fj

Numbers from the Quezon City Police District (QCPD) said that anti-administration protesters peaked at 5,500, while pro-Duterte rallyists were at 3,400.

Organizers from Bayan, however, claimed that the real number could be well over 40,000, given how a huge portion of the Commonwealth Avenue’s eastbound lane was occupied.

Supporters of President Duterte meanwhile slammed the administration’s critics for supposedly not considering the welfare of overseas Filipino workers (OFWs) in China in protesting against the Asian superpower.

They also insisted that Manila’s renewed ties with Beijing are nothing different, as Duterte implements an ‘independent foreign policy’.