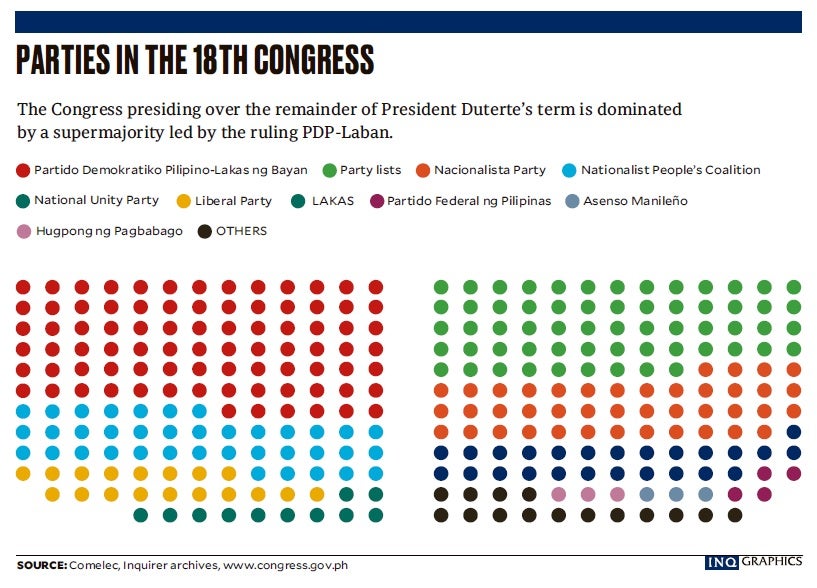 MANILA, Philippines — A “dark horse” may yet emerge on Monday when the House of Representatives votes for its new leader in the 18th Congress, a majority congressman said on Sunday.

“[Taguig Rep. Alan Peter] Cayetano is still the front-runner, but tomorrow morning, there may be a dark horse,” Albay Rep. Joey Salceda said in a radio interview.

“We’ll have something to look forward to on Monday, definitely, assuming Pulong can pull it off,” he told radio dzBB, referring to Davao City Rep. Paolo Duterte.

Cayetano and Marinduque Rep. Lord Allan Velasco are the leading contenders for the speakership. President Duterte had brokered a deal between the two, with Cayetano leading the House for the first 15 months of the 18th Congress and Velasco succeeding him in the remaining 21 months of that assembly.

Complicating the speakership contest, however, are the President’s own children, Paolo Duterte and Davao City Mayor Sara Duterte-Carpio, who have formed the so-called Duterte Coalition, apart from Cayetano’s own coalition-building.

Following Paolo Duterte’s remarks about a possible “coup” in Monday’s vote on the speakership, Cayetano met with him on Friday and offered the younger Duterte the position of deputy speaker for political affairs.

Cayetano claimed Duterte accepted the offer, although the President’s son had not acknowledged this publicly.

Further, Duterte had scheduled a breakfast meeting for Monday, ahead of the House election at the opening of the 18th Congress. About 200 lawmakers have reportedly confirmed attendance.

Another breakfast meeting will be hosted by Cayetano, apart from a meeting he also called on Sunday.

Salceda, in his radio interview, said the House members were now considering the President’s remarks that lawmakers were free to pick their own Speaker.

This was affirmed by former Speaker Pantaleon Alvarez, who told the Inquirer, “[It’s] so quiet. Anything is possible.”

Alvarez was ousted from the speakership last year following a rift with Sara Duterte. He was replaced by Gloria Macapagal-Arroyo right before President Duterte’s State of the Nation address.

But for Velasco, there will be no repeat of last year’s eleventh-hour drama at the House when the President addresses Congress on Monday.

“Right now, I don’t know any [information] that anyone is going up against [Cayetano for the speakership],” Velasco told the Inquirer after joining several lawmakers in watching the Manny Pacquiao-Keith Thurman bout on Sunday.

Asked if he would vote for Cayetano, Velasco said: “Yes, of course.”

On Sunday, Velasco joined Cayetano on Facebook Live following Sunday’s meeting called by the Taguig representative. He said he and Cayetano would ensure a “smooth transition” after Cayetano’s 15 months as Speaker.

Velasco and Pampanga Rep. Aurelio Gonzales, who gave up his speakership aspiration to support the Marinduque representative, both confirmed the breakfast meeting called by Paolo Duterte.

“As far as I know, the speakership issue is not on the agenda of the breakfast meeting with (Paolo) Duterte. He just wants to meet the congressmen since he is new in the House,” Velasco said.

Gonzales, interim executive vice president of the ruling PDP-Laban, said, “We respect the wish of the President. So … [it will be] Speaker Alan Cayetano.”

Camarines Sur Rep. Luis Raymund Villafuerte Jr., an ally of Cayetano, said when sought for comment, “The speakership issue has long been settled upon agreement of the 15-21 term-sharing proposal of all concerned.”

On Sunday’s meeting, Villafuerte explained: “There will be a small party leaders meeting later only to continue to discuss the committee assignments and allocations and of course how we can fast-track the priority legislative agenda of the administration. Everyone now is on work mode.”

“The PLC will follow the President and vote for APC (Cayetano) as Speaker for 15 months and thereafter LAV (Velasco),” Romero said.