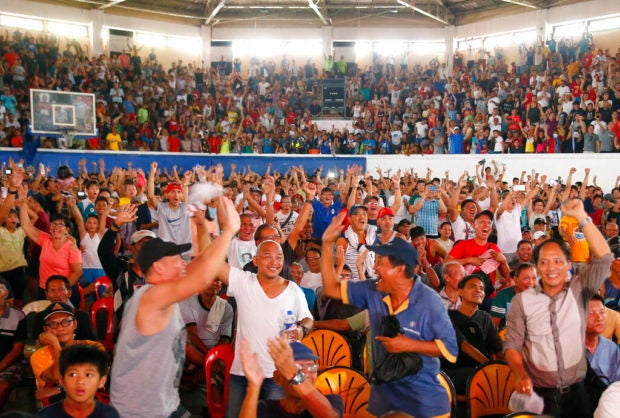 Filipinos cheer at the announcement of Philippines’ Manny Pacquiao winning via a split decision over Keith Thurman of the United States in their WBA welterweight title fight at the MGM Grand Arena which was beamed live via satellite from Las Vegas Sunday, July 21, 2019 in Manila, Philippines. Pacquiao won via a split decision to deal Thurman his first loss in his boxing career. (AP Photo/Bullit Marquez)

About 100 Aeta people in Pastolan Village gathered in front of the barangay hall to watch the free live feed of the boxing match.

A tribal council election was under way, but that did not stop the villagers from watching Pacquiao fight Thurman.

Some 10 policemen provided tight security for the tribal election, which was marred by high tension following allegations of vote-buying and other irregularities.

A man fainted in the covered court of Barangay Manotoc in Marikina City while watching the live telecast of the boxing bout. He died later, according to a radio report.

In Cebu City, a 41-year-old man suffered a heart attack after watching the boxing match.

Lorenz Dizon, of Barangay Kalunasan, was taken to Vicente Sotto Medical Memorial Center at 1:35 p.m on Sunday but was declared dead on arrival.

“According to reports, Dizon came home after he watched the fight of Pacquiao [at the barangay hall], but when he arrived home he had difficulty in breathing,” said Michael Gacasan, Guadalupe barangay chair.

Dizon’s brother said it was unlikely that his sibling died from watching the Pacquiao-Thurman fight.

“He already had a heart ailment. He had a blood clot in his heart and was just discharged from the hospital last Saturday. He was just at home,” he said.

Margarito Casquejo, 60, of Barangay Sawang Calero in Cebu City, was also rushed to the hospital after he experienced difficulty in breathing.

“He was too happy after hearing Pacquiao won in a split decision,” said Sergio Ocaña, Sawang Calero barangay chair.

Malacañang joined the rest of the nation in congratulating Pacquiao for capturing the WBA superwelterweight crown.

“We thank Senator Manny for not only bringing honor and glory to our flag, but for once again uniting all Filipinos worldwide with his display of athleticism, power and Filipino pride,” presidential spokesperson Salvador Panelo said.

In Koronadal City, business at the public market ground to a halt when the fight started at noon.

Even before the fight began, a majority of the vendors favored Pacquiao. The betting odds were 10-6 in favor of Pacquiao, meaning for a P10 bet, only P6 would be paid for a Pacquiao win.

A shopping mall in Koronadal offered free viewing, but customers with a single receipt worth P500 were given choice seats.

In Zamboanga City, soldiers wounded in the recent Sulu bombings left their hospital beds to cheer for Pacquiao and watch his fight, which was streamed live at the command’s gymnasium.

They were recuperating at Basilio Navarro General Hospital (BNGH) in the Western Mindanao Command (Westmincom).

Wearing the blue hospital uniform for patients, they cheered from their front row seats each time Pacquiao hit Thurman. They erupted into a roar after the boxing champion was declared the winner.

Brig. Gen. Generoso Ponio, Westmincom deputy commander, said the wounded soldiers were not the only ones who were able to watch the fight.

Starting from the division down to the battalion level, “all [were] directed to do a live streaming of Pacquiao’s fight,” Ponio said.

The Pacquiao-Thurman fight was seen live in the camps of 59 battalions under Westmincom, he added.

Senators set aside their political differences as they lauded their colleague for his victory.

“Upon your return to the country, let’s help knock out the problems besetting the Filipinos,” opposition Sen. Francis Pangilinan said in a statement.

Senate President Vicente Sotto III said the 40-year-old Pacquiao proved that he still possessed the skills of a world-class boxer despite his age.