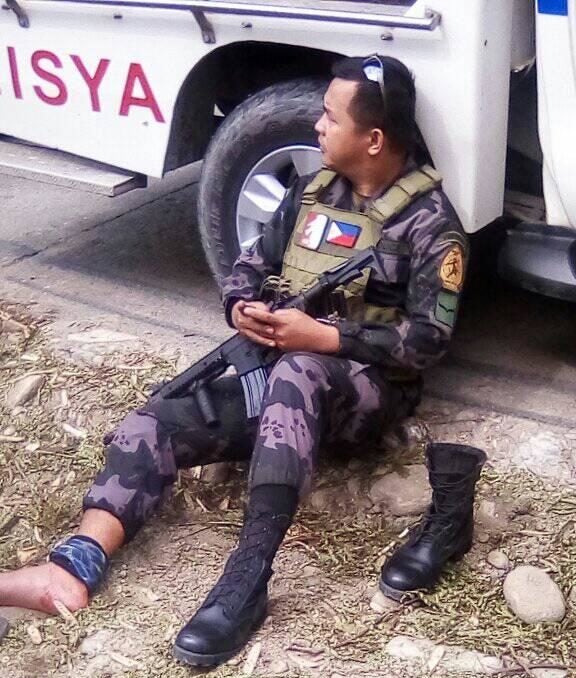 Patrolman Carmelo G Estioco with wounded feet wrapped with cloth as first aid, waits for an ambulance that will rush him to a nearby hospital. FB photo courtesy of Chazz Moreno Degorio

A report from the Agusan del Sur Provincial Police said the rebels were positioned on a hill in Barangay San Jose when they peppered a passing police car with bullets, hitting Patrolman Carmelo G. Estioco in the right ankle. The bullet pierced through his combat shoes.

He was immediately rushed to a nearby hospital.

All other policemen aboard the patrol car of the Provincial Mobile Force Company were unscathed.

Investigators believed some of the rebels were injured from the brief gunfight that ensued, as blood was seen on the ground where the gunmen were positioned.

In a statement posted on its Facebook page, the Agusan del Sur Provincial Police Office condemned the attack as “treacherous,” and without regard to the hard work by the police to make the province peaceful.

“They did this to threaten the people which caused fear among the populace, “ the statement said. /lzb

Read Next
Man nabbed for splashing acid on woman’s face in Albay
EDITORS' PICK
World-standard accounting: Unlocking your financial potential
Water remains our saving grace right now
Defend Your Health! Shop health essentials from home with Rose Pharmacy’s Online Sale
COVID-19 wards in 2 more hospitals reach full capacity
Navotas will be on lockdown from July 16 to 29 – Tiangco
Chatting with companions, answering calls on MRT 3 trains banned
MOST READ
‘I am not my father,’ says daughter of lawmaker who voted to deny ABS-CBN franchise
In slap on face of PH, China replies to Locsin on tribunal ruling: It’s invalid
Vilma Santos-Recto ‘prepared’ to face ‘consequences’ over ABS-CBN franchise vote
Did a meme get on Agot Isidro’s nerves? She’s asking ’24 Oras’ to fact-check it
Don't miss out on the latest news and information.