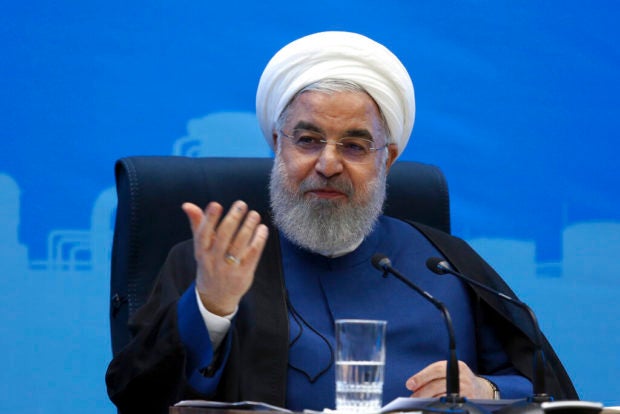 In this photo released by the official website of the office of the Iranian Presidency, President Hassan Rouhani speaks in a meeting during his provincial tour to the North Khorasan, Iran, Sunday, July 14, 2019. Rouhani said his country is ready to negotiate with the United States if Washington lifts its economic sanctions. (Iranian Presidency Office via AP)

DUBAI, United Arab Emirates  — Iran said Thursday its Revolutionary Guard seized a foreign oil tanker and its crew of 12 for smuggling fuel out of the country, and hours later released video showing the vessel to be a United Arab Emirates-based ship that had vanished in Iranian waters over the weekend.

The announcement solved one mystery — the fate of the missing ship — but raised a host of other questions and heightened worries about the free flow of traffic in the Strait of Hormuz, one of the world’s most critical petroleum shipping routes. One-fifth of global crude exports passes through the strait.

The incident happened with tensions running high between Iran and the United States over President Donald Trump’s decision to pull the U.S. out of the Iran nuclear deal.

Iranian state television did not at first identify the seized vessel but said it was intercepted on Sunday and was involved in smuggling some 1 million liters (264,000 gallons) of Iranian fuel. Iran did not identify the nationalities of the crew.

Crude prices, which had been falling since last week, ticked higher almost immediately after the announcement.

Iran said the tanker was seized south of its Larak Island in the Strait of Hormuz. Neighboring Qeshm Island has a Revolutionary Guard base on it.

Hours after that initial report, Iranian TV released footage of the ship surrounded by Guard vessels and showed the registration number painted on its bridge, matching that of the UAE-based MT Riah.

The Panamanian-flagged tanker stopped transmitting its location early Sunday near Qeshm Island, according to data on the tracking site Maritime Traffic. However, it often did so over the past two years when nearing Iranian waters, other tracking data shows.

It was not immediately clear whether the seizure was a straightforward attempt by Iran to curb oil smuggling or also an effort to assert its authority in the strait and send a message to its rivals in the region. The UAE has long lobbied for tougher U.S. policy toward Iran, though more recently it has called for de-escalation.

Iran’s Foreign Minister Mohammad Javad Zarif said that the seized vessel was at best a “small tanker” and that Iranian forces are cracking down on fuel smuggling daily.

“We live in a very dangerous environment. The United States has pushed itself and the rest of the world into probably the brink of an abyss,” he told reporters at the United Nations in New York. Zarif accused the Trump administration of “trying to starve our people” and “deplete our treasury” through sanctions.

Iranian media reported earlier this month that some 8 million liters of government-subsidized Iranian fuel are smuggled daily through Iran’s borders to other countries where prices are much higher.

Analysts at the Israeli-based maritime risk analytics company Windward said that the Riah has been at sea for the past two years and has a pattern of turning off its location transmitters for days at a time, particularly when entering Iranian waters.

The firm said data suggests that for more than two years that the 58-meter (190-foot) Riah had been clandestinely receiving fuel from an unknown source off the UAE coast and delivering it to other tankers, which then take it to Yemen and Somalia.

No distress calls were made from the Riah, and no ship owner reported a missing vessel.

The ship’s registered owner, Dubai-based Prime Tankers LLC, told The Associated Press it had sold the vessel to another company, Mouj Al-Bahar. A man who answered a telephone number registered to the company told the AP it didn’t own any ships.

Officials in the UAE said the ship was neither UAE-owned nor operated and carried no Emirati personnel.

In past weeks, the Persian Gulf region has seen six attacks on oil tankers that the U.S. has blamed on Iran, the downing of a U.S. surveillance drone by Iranian forces and a tense encounter between Iran’s Guard and the British navy. Iran has denied involvement in the attacks or the British naval encounter.

The U.S. has also sent thousands of additional troops and increased its security presence in the region.

Meanwhile, Iran has begun increasing uranium production and enrichment beyond the limits of the 2015 accord in a bid to pressure Europe to find ways around U.S. sanctions.

On Thursday, Iranian President Hassan Rouhani, in a phone conversation with French President Emmanuel Macron, urged European signatories of the deal to speed up their efforts to stop U.S. pressure, his website reported. He said efforts to stop Iran’s nuclear activities “are not acceptable under any circumstance.”