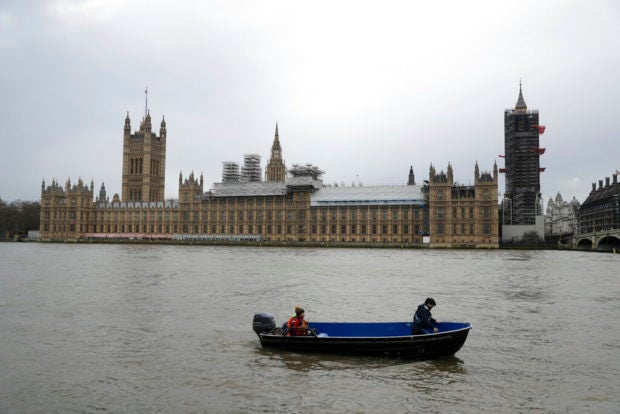 FILE – In this Wednesday, Jan. 31, 2018 file photo, people aboard a boat make way past the Houses of Parliament with Big Ben’s clock tower, the Elizabeth Tower covered in scaffolding for repairs in London. British lawmakers on Thursday July 18, 2019, put a substantial roadblock in the path of any attempt by a Brexit-backing prime minister to take the country out of the European Union without a divorce deal. (AP Photo/Matt Dunham, File)

LONDON  — With Britain set to get a new pro-Brexit leader within days, lawmakers on Thursday erected a roadblock in the path of any attempt by the incoming prime minister to take the country out of the European Union without a divorce deal.

The move came as the U.K.’s official economic watchdog said a no-deal Brexit would trigger a recession, with the pound plummeting in value and the economy shrinking by 2% in a year.

The Office for Budget Responsibility made its assessment as chances of a disruptive exit from the 28-nation bloc appear to be rising.

Britain is due to leave the EU on Oct. 31, but Parliament has repeatedly rejected the divorce deal struck between Prime Minister Theresa May and the bloc. Both men vying to take over from her as Britain’s prime minister, Boris Johnson and Jeremy Hunt, say they will leave without an agreement if the EU won’t renegotiate.

Most lawmakers, however, oppose a no-deal Brexit, and want to try to stop it happening. Johnson, who is the strong favorite to win the Conservative leadership race next week, has not ruled out suspending Parliament if it tries to block his plan to leave the EU at Halloween.

That got harder on Thursday, after the House of Commons approved a measure that effectively stops the government from sending lawmakers home in the weeks before the planned Oct. 31 departure. The 315-274 Commons vote saw several government ministers — including Treasury chief Philip Hammond — abstain rather than support the government’s call to keep suspending Parliament as an option.

Digital Minister Margot James resigned so she could vote against the government, saying it was “time for me to make a stand.”

Three years after British voters narrowly chose to leave the 28-nation EU, the nation remains deeply divided and stuck in limbo. May announced her resignation last month after failing to win Parliament’s approval for her Brexit deal.

Her successor is being chosen by about 160,000 members of the Conservative Party, most of whom are strongly in favor of Brexit and prepared to accept the risks of leaving without a deal. Johnson is the runaway favorite to win the contest when the result is announced Tuesday.

He claims that Britain can flourish outside the EU if it has enough optimism and “mojo,” and says a no-deal Brexit will be “vanishingly inexpensive” if the country prepares properly.

But most economists predict the economic shock would be severe, as tariffs and border checks were imposed overnight on trade between Britain and the EU.

The Office for Budget Responsibility, which provides the U.K. government with independent economic forecasts, said a no-deal Brexit would see “heightened uncertainty and declining confidence deter investment, while higher trade barriers with the EU weigh on exports.”

He said the OBR forecast was based on the “most benign version” of a no-deal Brexit, and in all likelihood “the hit would be much greater, the impact would be much harder.”

Johnson has downplayed the chances of a no-deal exit, saying he will go to Brussels and seek a new Brexit deal that retains “the best bits” of May’s withdrawal agreement and discards the rest.

But the EU insists it won’t change the 585-page withdrawal agreement, which sets out the terms of Britain’s departure and includes a transition period of almost two years to allow both sides to adjust to their new relationship.

“This document is the only way to leave the EU in an orderly manner,” EU Brexit negotiator Michel Barnier told the BBC in an interview broadcast Thursday.

Meanwhile, the relationship between the British government and the EU has been frayed by years of testy negotiations and allegations of ill-will on both sides.

EU Commission Vice-President Frans Timmermans told a BBC documentary that the British lacked a plan and were “running around like idiots” during the Brexit negotiations. He cited a catchphrase from the classic British sitcom “Dads’ Army”: “Don’t panic!”