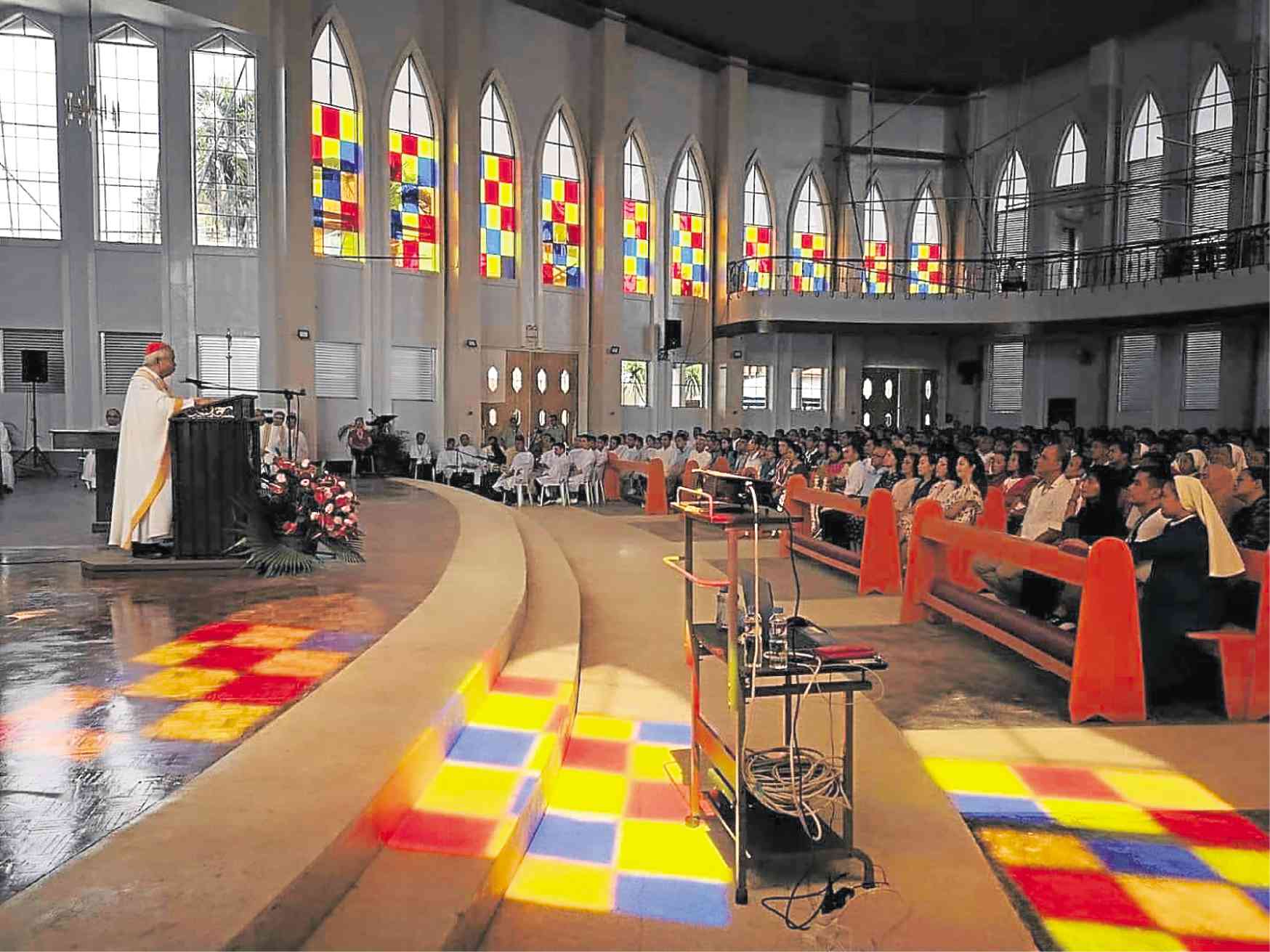 HOUSE OF PRAYER The doors of Mount Carmel cathedral in Jolo, Sulu, are once again open to the Catholic faithful, almost six months after the church was bombed by Islamic State-linked militants. —EDUARDO LIM/CONTRIBUTOR

ZAMBOANGA CITY—“It’s as if there is an experience of Easter where the body of Jesus has gone back to life.”

This was how Bishop Martin Jumoad of the Archdiocese of Ozamis described the reopening of the Jolo cathedral in Sulu province on Tuesday, the feast of the Our Lady of Mount Carmel.

“I am glad the cathedral is blessed and open for public worship,” said Jumoad, former bishop of the Diocese of Isabela which covers nearby Basilan province.

The Jolo cathedral closed after it was bombed on Jan. 27 while a Holy Mass was being celebrated. Another bomb was set off outside just after the first blast. The carnage left 22 people dead and more than 100 others injured, and heightened fears among residents.

Apart from being a bastion of the Catholic faith, the cathedral’s presence in Jolo symbolizes tolerance and coexistence with the majority Muslim population of Sulu.

Both Christians and Muslims condemned the attack, which, the military said, was the handiwork of Islamic State-linked militants.

Fr. Jefferson Nadua of the Oblates of Mary Immaculate in Jolo said that although repair work was only 80 percent done, the cathedral was opened by local church leaders on the feast day of its patroness. 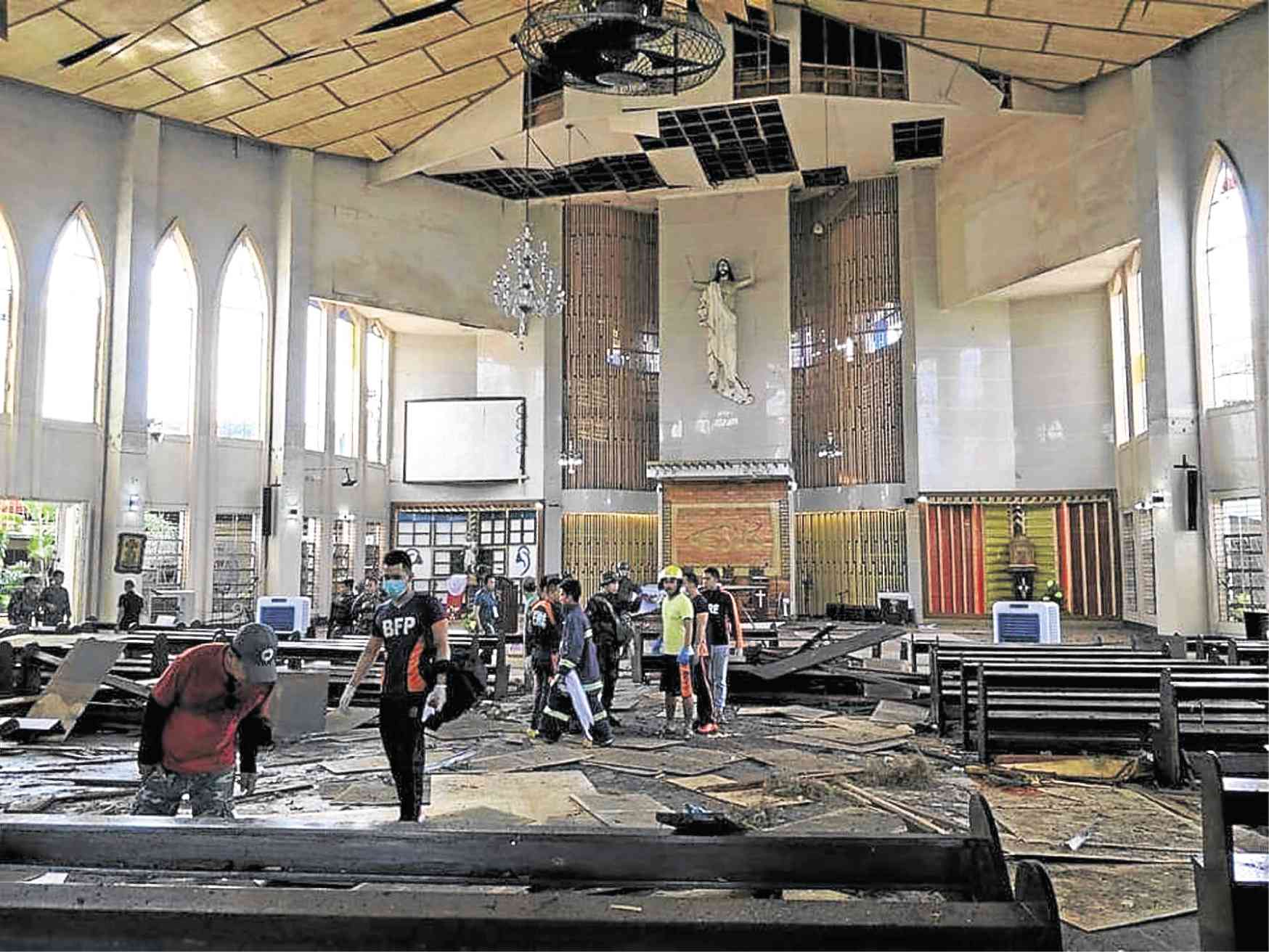 BLAST AFTERMATH Twenty-two churchgoers were killed while more than a hundred were wounded when successive blasts hit and damaged the Jolo cathedral in January. —CONTRIBUTED PHOTO

Hundreds of parishioners attended the Mass amid tight security outside the church.

Policemen and soldiers inspected people entering the cathedral. Traffic flow on roads leading to the church was heavily regulated.

Quevedo delivered a homily that centered on Mary or Mariam as being held with respect by both Christians and Muslims.

Caccia assured Jolo parishioners that they “are not alone because the Catholic community is with them in their grief and in overcoming it.”

After the Mass, Caccia blessed the walls of the cathedral. The effort to rebuild the church interior drew support from both Christians and Muslims.

Among the benefactors were Aid to Church in Need, a Vatican-recognized foundation, social and civic organizations, and former officials of the defunct Autonomous Region in Muslim Mindanao.

Lawrence Lay, 57, a retired instructor of Notre Dame College of Jolo, welcomed the reopening of the cathedral but noted the tense atmosphere surrounding the event.

Lay said this was indicative that “tension and insecurity had never dissipated.”

“I cannot say we are totally safe here, we are just vigilant. But business as usual, because we need to move on,” he said.

Lay, a Catholic Tausug, likened the cathedral to a fortified military camp, covered with sandbags and fully barricaded with troops.

“Gone are the days of an open church, where anyone can walk in and out freely,” he said.

Lt. Gen. Cirilito Sobejana, commander of the Western Mindanao Command, said security forces had been beefed up since the opening of the cathedral.

“The place is closely guarded and we have coordination with the leadership of the church … to secure the place and the people, with or without major events,” Sobejana said.