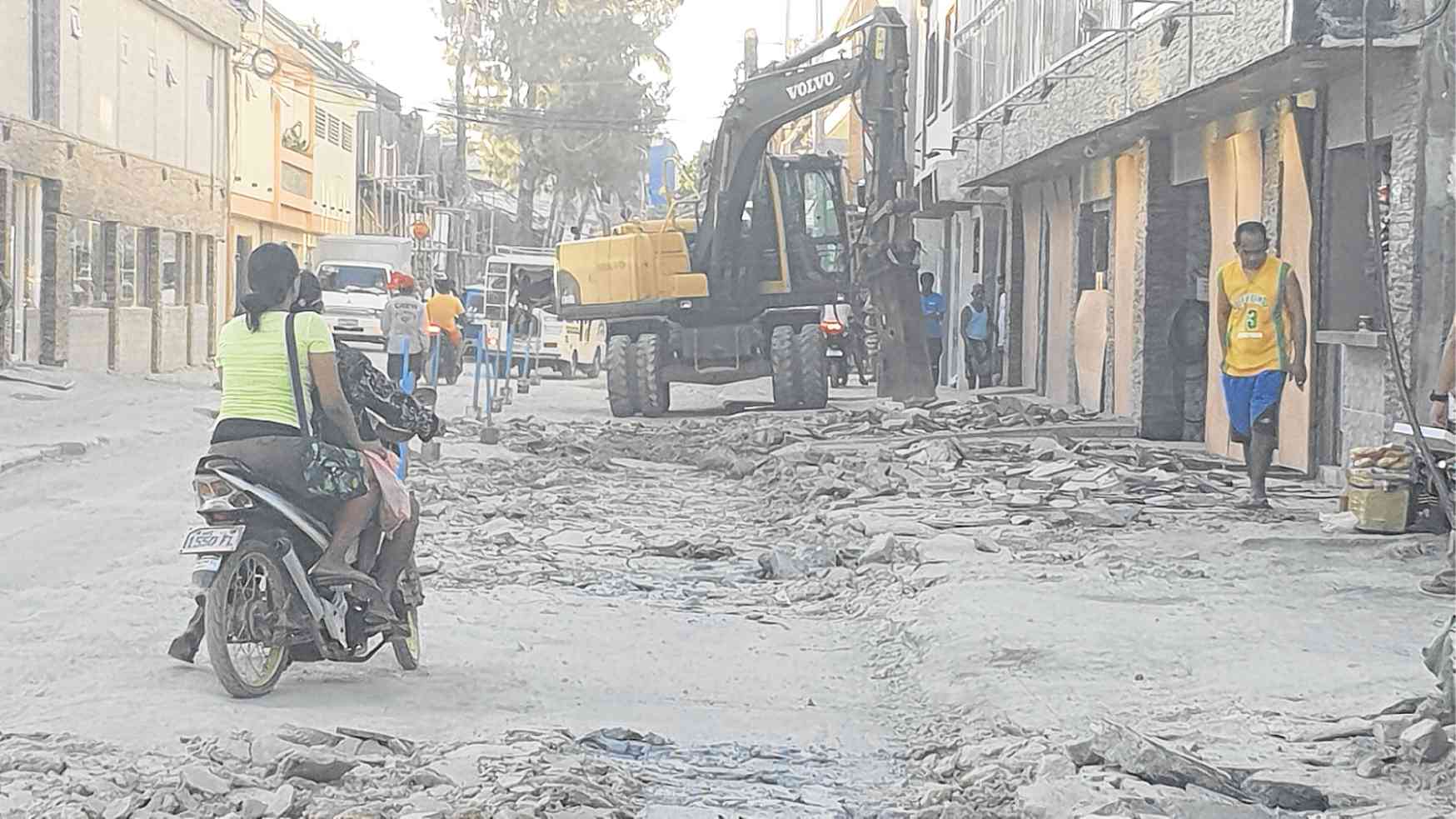 BUMPY RIDE Tourists and residents endure a bumpy ride as repair work continues at a section of Boracay Island’s main road in this photo taken in May. —NESTOR BURGOS JR.

This was the appeal of the interagency task force managing the rehabilitation of Boracay after flash floods hit on Tuesday, saying it needed more time to complete fixing the road network and drainage and sewage systems on the resort island.

“We appeal to tourists and residents of Boracay that the flooding we are experiencing is basically caused by the ongoing construction of the rehabilitated drainage system. We are still not done will all these projects [which] will be completed in the middle of next year,” Natividad Bernardino, general manager of the Boracay Interagency Rehabilitation Management Group, said in a press conference broadcast from the island on Wednesday.

“In the meantime … we need to bear many pains and sacrifices,” Bernardino added.

Images of tourists and residents wading in floodwaters up to 1 meter (3 feet) at the height of the downpour were posted on Facebook. Heavy rains also triggered flash floods on the island in May.

Tuesday’s flooding, triggered by enhanced monsoon rains due to Tropical Depression “Falcon,” hit a portion of the main road near Ambassador Hotel in Barangay Balabag, D’Mall commercial complex and Bloomfield Road in Sitio Bulabog in Balabag.

Bernardino said drainage pipes in some areas had been plugged due to the ongoing construction of the drainage system.

“What we can do at the moment is to undertake mitigating measures,” she said. These include putting up pumps, temporary outfalls and drainage canals, especially in low-lying and flood-prone areas.

Bernardino said they expected the situation to improve significantly once the drainage project was completed.

President Duterte ordered the closure of the island to tourists for six months last year, from April 26 to Oct. 25, to undergo rehabilitation amid worsening environmental and other problems.

But rehabilitation activities, including the upgrading of the main road and drainage and sewage systems, remain unfinished, with several projects set for completion in 2020 and 2021.

The closure and rehabilitation displaced 30,000 workers and residents dependent on tourism for their livelihood. Small businesses were also forced to close down.

Residents said problems remained on the island despite the closure.

“After six months of total closure promising to fix [the island, the situation] has become worse. For that six months of forced closure, we lost a lot of business … and today, we are made to suffer further with the flood affecting our businesses,” designer PJ Arañador, a business owner on the island, said in a Facebook post./ac