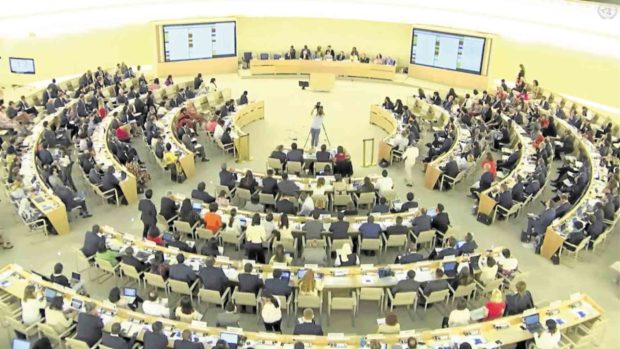 ON WITH THE PROBE The UN Human Rights Council in Geneva, Switzerland, on Thursday votes 18-14, with 15 abstentions, adopting a resolution to review the human rights situation in the Philippines and urge the Duterte government to conduct impartial investigations of rights abuses. —UN.ORG

MANILA, Philippines — An official of the Presidential Human Rights Committee on Thursday dismissed the adoption of the United Nations Human Rights Council (UNHRC) resolution, saying the move to probe the human-rights situation in the country is a form of “bullying.”

Undersecretary Severo Catura, of the administration’s human rights committee, said the government rejects the resolution and will neither consider providing official records on the drug war to the council.

“So far we stand by our position that we totally reject that resolution. Any action in relation to that, we will not honor,” he said during the Real Numbers PH presentation in Quezon City that aims to clarify official data on the government’s campaign against illegal drugs.

“We see this as something as a sort of bullying and we cannot stand this kind of bullying,” he also said.

During its 41st session in Geneva, 18 of the 47-member states of the council voted in favor of the Iceland-led resolution, which asked High Commissioner on Human Rights Michelle Bachelet to present a report on the human-rights situation in the Philippines, including drug killings.

Fourteen of the member states voted no, while 15 others abstained.

Catura, however, believes there are other methods from the international community to engage the country on the situation of human rights here, “but not through that resolution.”

“We are open to other engagement. There are other mechanisms in which we are very much a part of and which are respected by UN mechanism. But again, going back, we totally reject that resolution,” he said. /jpv