At a half-century-old Sanskrit college, there is a will, but there is no money 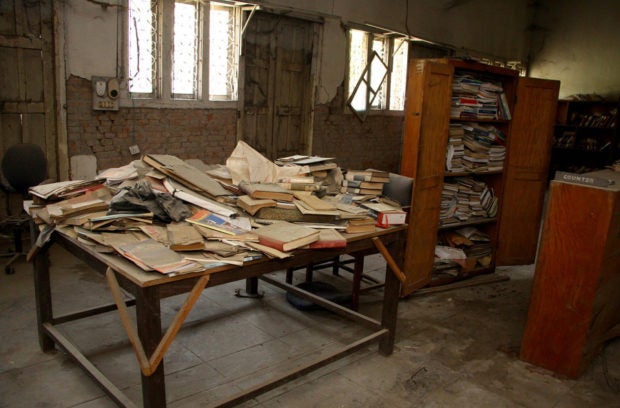 KATHMANDU — For the past 22 years, Ganesh Ghimire has been part of the Balmiki Campus—first as a student, then a faculty member, and now as campus chief.

Every day, he enters the 68-year-old campus on Exhibition Road, opposite the Kathmandu Fun Park, and his heart breaks. Beyond the beautiful wood-carved doors, where over a thousand students study the Sanskrit language every day, the smell of urine and faeces engulfs the air. A dark corridor opens into a muddy, grassy field that houses three shabby campus buildings—one of which looks like it could crumble any minute. Inside its cracked walls are 50,000 books—forsaken and forgotten.

Ghimire, who has been campus chief for the past two years, says that his hands are tied and he can’t do much to help.

“We love this campus like our home, but things are tough for us. What can we do to make the campus better when we don’t have finances?” said Ghimire.

Established in 1951, the Balmiki Campus is a branch of Nepal Sanskrit University, which is headquartered in Dang. Since the earthquakes of 2015, the campus—sparing the classrooms—suffered massive damage, especially their library, which houses thousands of centuries-old rare manuscripts that are now lying unattended.

The campus administration managed to salvage the most important of the ancient handwritten manuscripts—pandulipis—wrapping them in cloth sheets. But the rest of the books, also important, suffer. The library, which is on the east side of the college premises, looks abandoned and decrepit, with unorganized bookshelves. Many of the books themselves have suffered rain damage while others have holes from silverfish. Most books are covered with a thick layer of dust, as if no one has flipped through them in decades.

“We use medicine to prevent silverfish but that’s about it,” said Ghimire.

Every month, Rs 25,000 is allocated for campus maintenance and Rs 50,000 for the purchase of new books. But that is not enough, according to Ghimire.

After the 2015 earthquake, Balmiki Campus presented a Detailed Project Report (DPR) to the Nepal Reconstruction Authority in 2016 for the reconstruction of its library. But three years on, no progress has been made.

“We have been patiently waiting for the project to begin for the past three years, but nothing seems to have taken off,” said Ghimire.

According to the National Reconstruction Authority, the government of India had taken responsibility for reconstructing the library but there have been “technical issues”.

An official at the Indian Embassy confirmed that the Balmiki Campus will be reconstructed under the Indian line of credit of $750 million for post-earthquake reconstruction work.

The Indian government has agreed to the proposal submitted by the NRA and has allocated an estimated cost of $1.74 million for the construction of Balmiki Campus, the official told the Post.

However, a company to work on the reconstruction has yet to be identified.

“The project was delayed for some technical issues, but now we are looking forward to working in speed,” the Indian Embassy official, who agreed to provide information only on condition of anonymity, told the Post.

India will reconstruct the library but the books remain the responsibility of the campus and as things currently stand, there is not much they can do, said Ghimire.

“Some people have come with offers of digitizing our books, but we don’t have the budget to pay them,” he said. “How can we take ownership and responsibility if there is no money at all? We sometimes don’t get paid for months.”

But Kul Prasad Koirala, vice-chancellor of the university, said that all employees have been getting paid.

“Since I joined the university, I have made sure that the employees are paid on time. That has been my number one priority,” said Koirala. He, however, did admit that there were budgetary issues that were preventing the university from functioning as it could.

Many of the university’s branch campuses offer free education to students, along with stipends, which may have caused budgetary issues, said Koirala.

“We have our own restrictions in terms of the government’s budget,” he said, “ but if they can spend money on Tribhuvan University, they should treat us equally.”