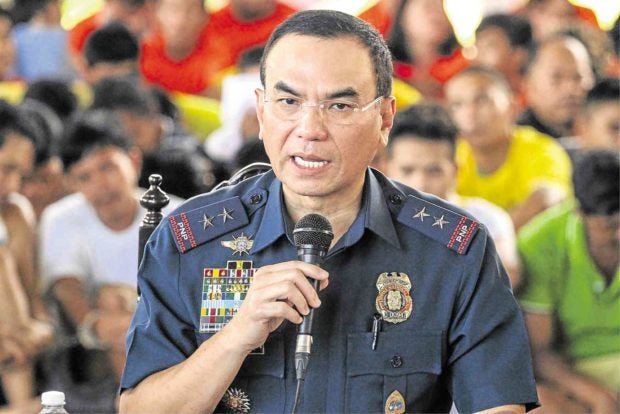 MANILA, Philippines – Five days ahead of President Rodrigo Duterte’s State of the Nation Address (Sona), police said they have not monitored any terror threat to the security of the Chief Executive or those who will stage rallies.

During a dialogue between stakeholders of the upcoming Sona on Tuesday, Maj. Gen. Guillermo Eleazar, director of the National Capital Region Police Office (NCRPO), said the security forcers are on top of the situation especially after the deadly suicide bombings at a military camp in Indanan, Sulu on June 28.

(We have not monitored any threat, but like what we always do, we continuously coordinate with other agencies in monitoring any threat.)

Eleazar said it will be up to the Presidential Security Group (PSG) to decide whether to jam telecommunication signals, like in the previous years, within the vicinity of the Batasang Pambansa Complex where Duterte’s fourth Sona will be held.

He also assured that over 15,000 police officers joined by force multipliers have a contingency plan on unexpected situations, including if Duterte decides to show up before the crowd like he did in 2017.

If Duterte decides to repeat his unexpected move, Eleazar admitted that the situation will be “more challenging” for the police.

He added that the Tuesday dialogue with stakeholders, including government agencies and leaders of progressive groups, are part of the “fine tuning” efforts of the NCRPO to secure participants of Sona.

Lanes of some streets near Batasang Pambansa will also be closed to motorists depending on the volume of rallyists, according to Jojo Garcia, general manager of the Metropolitan Manila Development Authority.

Around 15,000 protesters are expected to join the rallies during Duterte’s Sona on Monday. /jpv

Protesters urged to not wear jackets, bags during Sona