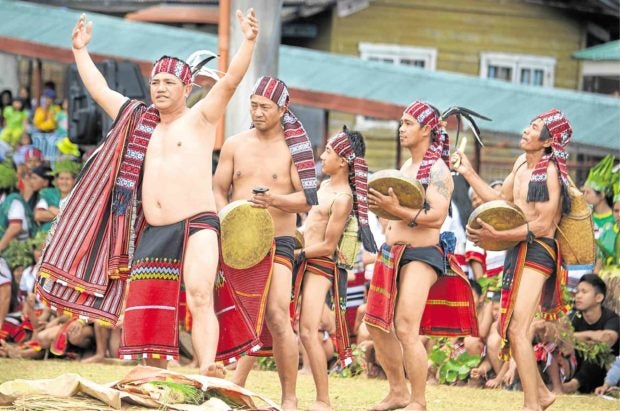 UNITY SYMBOL The Cordillera Administrative Region marks its 32nd founding anniversary through rituals and the beating of gongs to symbolize unity among residents of the six provinces and a city comprising the mountain region in northern Luzon. —KARLSTON LAPNITEN

TABUK CITY, Kalinga, Philippines — Cordillera leaders have expressed hopes that the region’s shift to an autonomous status will be among President Rodrigo Duterte’s legislative agenda when he delivers the State of the Nation Address on July 22.

Along with government officials and advocates for Cordillera autonomy, they celebrated here on Monday the region’s formation as an administrative region, 32 years since it was formed by the late President Corazon Aquino on July 15, 1987.

Carrying this year’s theme, “Building One Greater Cordillera,” they gathered here to celebrate Cordillera Day with rituals, a grand street parade, a fashion show and the beating of the so-called Unity Gong.

Kalinga Rep. Allen Jesse Mangaoang said he sought the help of Taguig Rep. Alan Peter Cayetano, the presumptive Speaker, to raise their petition to the President.

“He (Cayetano) could help mention our struggle for autonomy with the President. Hopefully we can receive attention like the [Bangsamoro Autonomous Region in Muslim Mindanano, or BARMM],” Mangaoang told the Inquirer.

Mangaoang and Cayetano, who was endorsed by the President to head the House of Representatives, belong to the same political party.

Milagros Rimando, National Economic and Development Authority regional director, said they were exploring various channels to urge the President to include Cordillera autonomy among the priority bills in Congress.

Mountain Province Rep. Maximo Dalog Jr. said a new bill would be refiled by all seven Cordillera congressmen after “a thorough review and possible revisions.”

Dalog said having all Cordillera lawmakers endorse the bill would signify a unified position among the region’s leaders to pursue autonomy.

According to Rimando, who is also the vice chair of the Regional Development Council, Cordillera autonomy is the “most effective option” to pursue sustainable development through the management and use of the region’s natural resources.

In a plebiscite on Jan. 30, 1990, only Ifugao voted in favor of autonomy while only Apayao, then newly separated from Kalinga, voted for autonomy in the second plebiscite on March 9, 1998.

Rimando said the lack of understanding on autonomy led to the failure of the two previous referendums. “We don’t want a third failure that is why we are taking calculated moves,” she said.