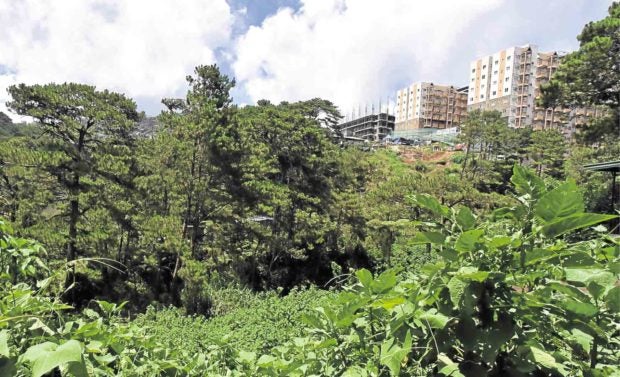 FIXING BAGUIO Patches of pine forests give way to buildings and commercial establishments as Baguio City welcomes tourists and investors. But local officials are planning to ban tree cutting and building construction for a year as the government rehabilitates the city. —EV ESPIRITU

BAGUIO CITY, Benguet, Philippines — A one-year moratorium on building constructions as well as cutting of trees in the city is being worked out with Malacañang to repair the sewage system and allow pine forests to bloom, Mayor Benjamin Magalong told members of the city council on Tuesday.

He said Environment Secretary Roy Cimatu and Interior Secretary Eduardo Año were drawing up an executive order that would facilitate “Boracay-scale” repairs and the upgrade of public services by tapping national resources.

He spoke to the council on the 29th anniversary of the July 16, 1990, earthquake that devastated the city and wide areas of northern Luzon.

Baguio took months to be restored after the 7.7-magnitude temblor toppled buildings and killed more than 1,000 people.

In 1945, the city also underwent massive rehabilitation when major areas were bombarded by American airplanes during the liberation from occupying Japanese forces at the end of World War II.

Magalong said the draft order would not require the closure of Baguio in the same way the national government had stopped tourists from visiting Boracay Island in Aklan province for six months last year while government agencies cleaned up the tourist site.

Baguio needs to be open for transient workers and students and for travelers headed for other Cordillera towns like Sagada in Mountain Province, he said.

The rehabilitation plan would require at least P500 million from the national government, he said, adding that the scope would include connecting 90,000 households to new sewage treatment plants in the city.

The plan would also include plugging leaks in the city’s sewers that may have increased the volume of waste discharged into the Bued and Balili rivers in the city’s outskirt.

Magalong said bad sewage appeared to be a major contributor to river pollution because treated water from the only sewage treatment plant along Balili River had been deteriorating. Only 2,400 houses are connected to the treatment plant, he said.

Magalong said it may take P365 million for the city government to rebuild and modernize the sewer lines, some of which were built in the early 1990s.

To make this work, the city government would need to review population growth as well as the density of buildings in the business and tourist centers.

An initial report from a team commissioned to study Baguio’s urban carrying capacity concluded that the city’s resources are strained at daytime when the population grows to 725,000 people with the influx of out-of-town workers, students, businessmen and tourists.

The study also said the city’s built-up areas had encroached into its forest cover. About 2.5 million trees remain standing in Baguio, which represent 28 percent (1,643 hectares) of the city’s 5,700-ha area.

Apart from a massive regreening program, the moratorium would allow the city government to review the rules governing building constructions, Magalong said.

For example, some building projects are exempted from zoning regulations by national agencies. The Baguio Water District has not been consulted each time a new building project gets clearance to determine how it will impact on potable water supply. —Vincent Cabreza