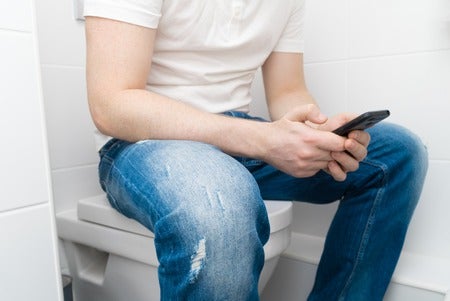 A man from Belgium attempted to set a Guinness World Record by sitting on a toilet for almost seven days. Image: INQUIRER.net stock photo

A man in Belgium attempted to set a Guinness World Record by sitting on a toilet for 165 hours or nearly seven days.

Jimmy De Frenne challenged himself to sit on a toilet in a bar at Ostend, Belgium for 165 hours to set the world record, as reported by Inside Edition on Sunday, July 14. However, De Frenne gave up after 116 hours when his legs “eventually began to hurt” and he got tired.

De Frenne was allowed to get off the toilet for five-minute breaks. He could accumulate those breaks over the hours to get time for sleep. He also needed potty breaks since the toilet was not connected to any plumbing at the bar.

During De Frenne’s breaks, he checked his phone, ate his meals and enjoyed conversations with friends and family.

De Frenne’s record has not yet been validated by Guinness World Records and representatives have yet to comment on his attempt. Hannah Mallorca/NVG

‘So loud’: Foul gas expelled by suspect leads to his arrest

Man needs 15 stitches after python in toilet bites his penis