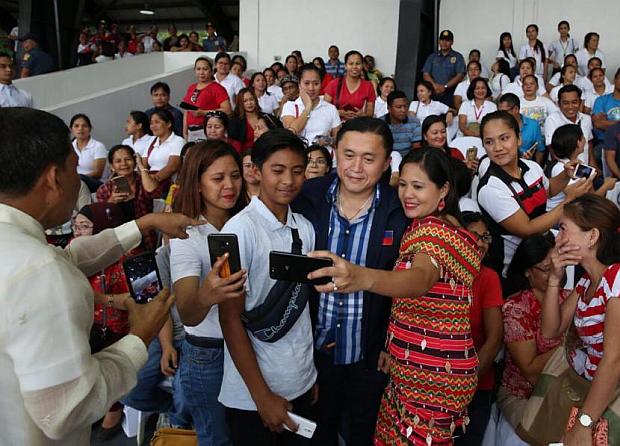 “We won’t allow recruitment from outside,” the President, speaking in Filipino, said on Friday at the Araw ng Pasasalamat sa OFW Summit held in Camp Aguinaldo in Quezon City. “If they want [outside recruiters], they will have to be under the supervision of the government and there will be no horrendous charges. I won’t allow that.”

He said aimed to make the department for OFWs created by December.

“This will be for the whole Philippines. No recruitment from outside. Just go to the department and deal with the people there. They will have a list [of possible employers]. I have the power to do that because that kind of mechanism of recruiting Filipino workers abroad has been abused and abused and abused,” the President said.

Meanwhile, Go echoed his sentiments. Speaking in Filipino, he said in an interview: “The President wants to prevent illegal recruitment of OFW. So many victims have approached him and me asking for help. This has to stop.”

According to Go, many Filipinos continue to fall prey to exploitative illegal recruiters who impose excessive fees while making false promises of employment abroad.

To address this issue, Go said among the first bills he filed was Senate Bill No. 202 — the Department of Overseas Filipinos Act of 2019.

Under this measure, the department will serve as the umbrella agency to address all issues and concerns of Filipinos abroad and their families.

Once the measure becomes a law, the department will absorb all the functions of the Philippine Overseas Employment Administration, the Overseas Workers Welfare Administration, the Office of the Undersecretary for Migrant Workers Affairs of the Department of Foreign Affairs, the Commission on Filipino Overseas,and the International Labor Affairs Bureau.

The measure will also create an Overseas Filipinos Assistance Fund to provide financial support to Filipino migrants in distress, inclusive of repatriation and provisions for life-saving funds in times of great emergency or distress, and provides training and livelihood loans for OFWs returning to the Philippines for good.

The bill also mandates the creation of “OFW Malasakit Centers” in all provinces and major cities to ensure prompt and efficient provision of services to OFWs and their families such as the acquisition of government permits, validation of overseas job offers, complaints desks, and reintegration services.

Currently, OFWs need to go to different government agencies to secure their documents and present their other concerns such as employment and technical education.

When asked about the likelihood of the proposed measure passing, Go said he had high hopes that the President would certify the OFW Department Bill as urgent to get it passed into law before the year ends.