MANILA, Philippines — The Philippine Navy should join the freedom of navigation operations (FONOPs) in the West Philippine Sea (South China Sea) to enforce the arbitral ruling that invalidated China’s claims to most of the South China Sea.

Speaking at a forum to mark the third anniversary of the landmark ruling, Senior Associate Justice Antonio Carpio said the naval powers are enforcing the arbitral award in the last three years through the increase of FONOPs.

Friday marked exactly the third year since the Permanent Court of Arbitration in The Hague, ruling on a case brought by the Philippines, invalidated China’s claim to nearly the entire South China Sea.

The senior magistrate said countries like the United States, United Kingdom, France, Australia, Japan, India, and Canada have been enforcing the ruling through the conduct of FONOPs in the South China Sea. 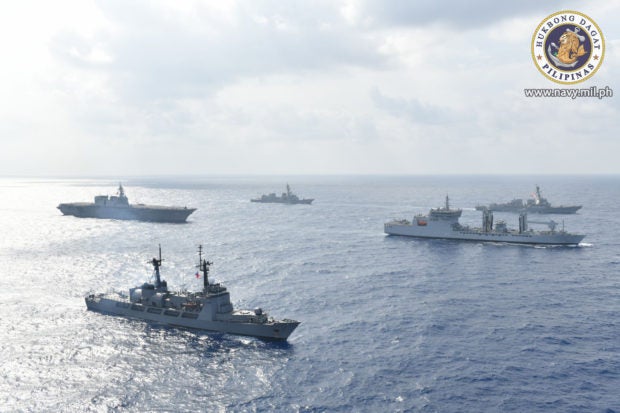 Navies of the Philippines, United States, Japan, and India sail the international waters of the South China Sea as they head to Singapore for the ADMM-Plus Marsec FTX in May 2019. PHOTO from Philippine Navy

“These FONOPs are the most robust enforcement of the arbitral award. Even as I speak now, a warship of these naval powers may be sailing in the South China Sea to refute China’s nine-dash line claim and in effect enforce the arbitral award,” Carpio said.

He said the current administration had distanced itself from the FONOPs of naval powers to show that the Philippines does not take sides in the dispute between China and these naval powers.

“I personally welcome and even encourage these FONOPs and hope that in the future the Philippine Navy could join the FONOPs of these naval powers to refute China’s nine-dash line claim and enforce the arbitral award,” Carpio said.

President Rodrigo Duterte has shelved the ruling in exchange for Chinese economic aid and investments.

On Monday, Duterte dared the US to deploy its entire 7th Fleet in the South China Sea to push China out of the disputed waters.

“If America really wants to drive away China, which I can’t do, I’ll ask for its help. I want the whole of 7th Fleet of the United States there,” he said.

The 7th Fleet of the US Navy is the largest forward-deployed US fleet, which covers the Pacific and Indian Oceans.

Carpio said there was no need to ask the US to deploy its entire 7th Fleet in the West Philippine Sea because it regularly conducts FONOPs there.

“All that the Philippines has to do is to send the Philippine Navy on a joint patrol with the US Navy, and with other naval powers of the world, when they conduct FONOPs in the West Philippine Sea,” he said. /ee

Read Next
If Romualdez runs for VP in 2022, Duterte will endorse him – Palace
EDITORS' PICK
Heads may roll at BOC, says Palace if sugar smugglers are allowed to use recycled import permits
Palace: Biggest supermarkets in PH commit to sell sugar at P70 per kilo
What to watch out for when selecting a video surveillance solution
House energy committee chair Arroyo bats for cheap electricity
vivo brings to the Philippines a powerful smartphone with a slimmer body, the vivo Y02s for only PHP 6,499
DOH reports increase in daily COVID-19 deaths, mostly unvaxxed
MOST READ
Brian Poe-Llamanzares receives his PhD in Public Administration
Peso loses ground vs US dollar
Alyssa Valdez to miss Creamline’s AVC Cup campaign
Rhian Ramos on new beau Sam Verzosa
Don't miss out on the latest news and information.