Duterte dares US to declare war on China 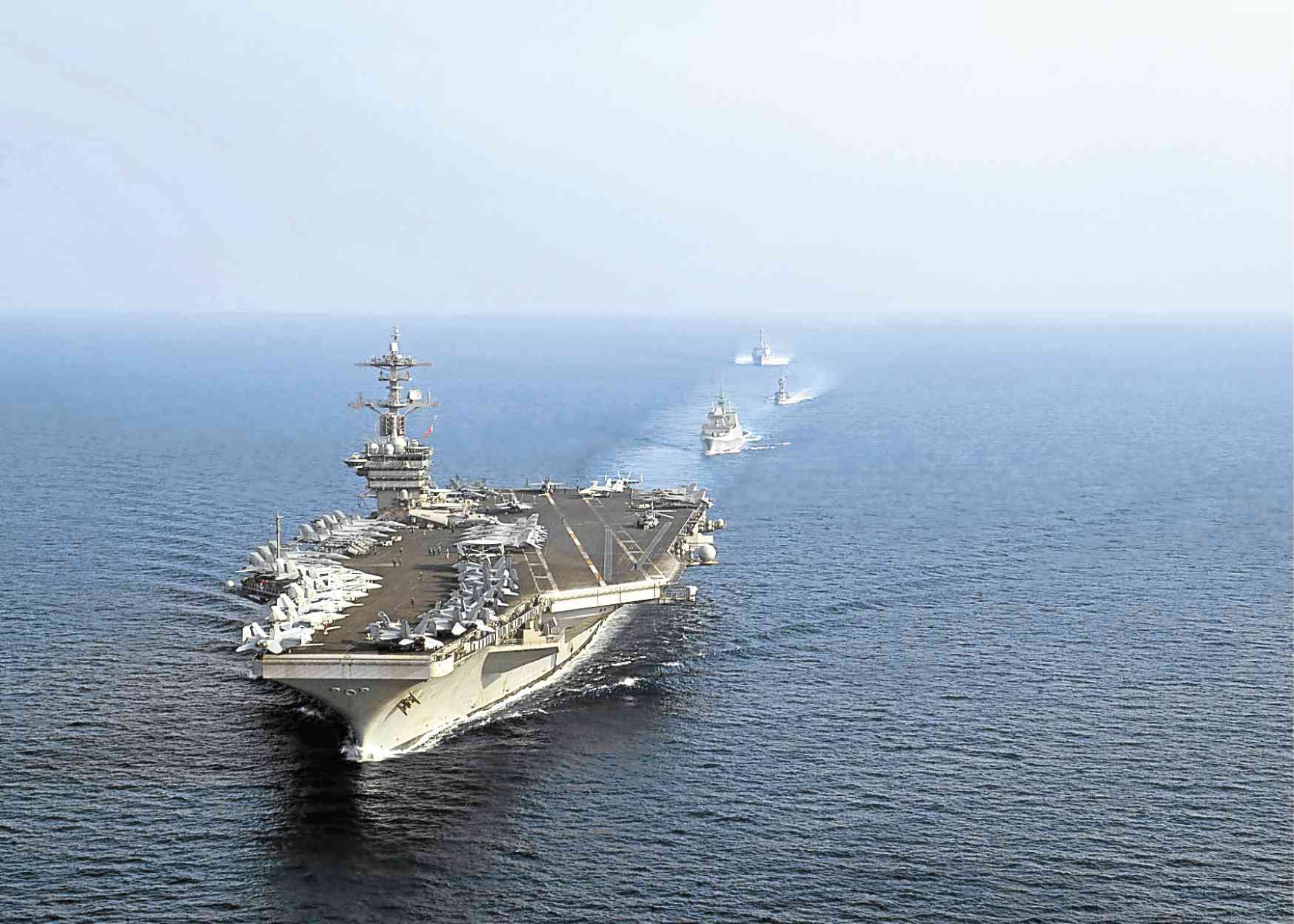 MARITIME SECURITY The aircraft carrier USS Theodore Roosevelt, seen in this photo leading a formation of US and Singapore Navy ships during an exercise in the South China Sea in April, was deployed to the US 7th Fleet for maritime and security operations in the region. US Assistant Secretary of Defense Randall Schriver on Thursday said Washington would be “a good ally” to Manila in its territorial conflicts in the South China Sea. —AFP

MANILA, Philippines — President Rodrigo Duterte on Friday dared the United States, a longtime ally of the Philippines, to send “all their armaments” to the South China Sea and stop Beijing’s militarization in the disputed sea.

“Let America declare the war. Let them assemble all their armaments there in the South China Sea,” Duterte said in his speech in Alangalang, Leyte.

“Fire the first shot, and I’d be glad to do the next. May RP-US pact man kaha tayo (We have a US-RP pact), then let us honor it. Do you want trouble? Okay, let’s do it,” he added.

Reiterating that the Philippines would not win a war against China, the President dared the US to “fire the first shot” in the South China Sea.

(Now I say, bring all your airplanes and ships to China. Fire the first shot, and we are behind you. Let’s fight and see who will be pummeled. True. America.)

Based on the US-Philippines the mutual defense agreement signed in 1951, both nations agreed to support each other if attacked.

He urged China not to “overdo things” in the South China Sea as the Asian superpower continues its reclamation and militarization in the disputed sea.

“Kaya ‘yan ang problema natin (That’s our problem). I hope that China would not overdo things also because there is always America pushing us, egging us,” he said. “Anong tingin ninyo sa Pilipino, wati (What do you think of Filipinos, earthworm)?” he said.

That is exactly prohibited by international law, and the fact that you are constructing it within the exclusive economic zone of our friend, the Philippines,’” he continued. “America could have done it earlier but did not. I am surprised why.”

“Hinayaan nila. Ngayon na medyo nandiyan na ‘yan (They allowed it. Now that it’s there), all the guns are there, all the missiles are mounted, they want us to enforce our fisheries law and to protect the environment there. Tanungin ko sila (I’ll ask them). Are we in possession of China Sea? Because if we are not […] You are […] out of your rockers,” he added.

He even said he wanted to let his fiercest critics on the South China Sea issue run the government.

The three are among Duterte’s biggest critics on how he handles the South China Sea dispute and asked him to enforce the ruling giving the Philippines the sovereignty over the disputed area.

Then he questioned China’s sweeping claims in the South China Sea but was quick to say that enforcing the 2016 Hague ruling that favored Manila’s diplomatic protest against Beijing would lead to war.

“Ngayon lang ako nakita ng isang […] country na sinolo ang isang ocean. They are attacking me on the collateral na I should bar China from fishing, from destroying… Gusto nila pumunta ako doon (They want me to go there),” he said.

“How do I enforce the arbitral ruling? Magpunta ako doon, dala ko Navy ko (Should I go there and bring my Navy and insist and say, ‘Hey, you guys, you go out’)?” And China [would say], “No, what do you want?” So magka-giyera tayo (So we are going to have a war),” he added. With a report from Joey A. Gabieta, Inquirer Visayas (Editor: Eden Estopace)