Dela Rosa: ‘Cut my head off if drug killings are state-sponsored’ 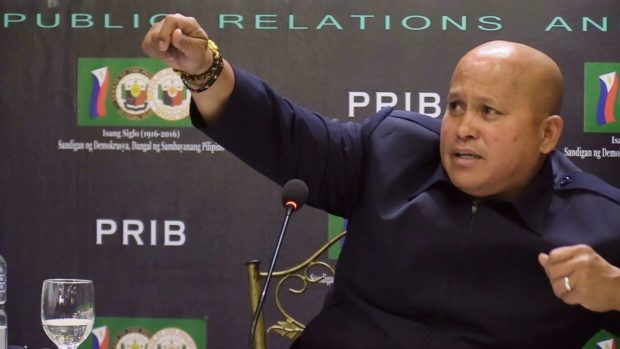 MANILA, Philippines — Senator Ronald “Bato” dela Rosa said Friday he will have his head cut off if proven that killings in the drug war are state-sponsored.

Dela Rosa, former chief of the Philippine National Police (PNP), said this a day after the adoption of the United Nations Human Rights Council (UNHRC) of an Iceland-led resolution prompting the body to look thoroughly into the human-rights situation in the country.

READ: UN nod to Iceland-led resolution vs PH killings a ‘sign of victory’ for victims

“Gusto nila palabasin na ito ay [They want to portray that this is] state-sponsored. I will have my head cut off if this is state-sponsored,” he told reporters in a chance interview at Camp Crame, Quezon City.

Dela Rosa also challenged the UNHRC to “come down” to the Philippines and cut his head if proven that every incident in the thousands of deaths in the war on drugs is allegedly carried out by the police.

“You come here and cut my head off if this is state-sponsored, ‘yung alleged EJKs [extra-judicial killings] na sinasabi niyo [the alleged EJKs you are talking about],” he said.

Dela Rosa also agreed with Malacañang that the adoption of the resolution was “insulting” to the Filipinos and this disrespects the sovereignty of the country.

He also criticized the 27,000 deaths or the supposedly bloated figure of human-rights groups on the drug war death toll, saying in jest that the number might have included those killed in vehicular accidents and heart attack.

He said that if the Philippine government is indeed so wrong in the war on drugs, he would not have landed a seat in the Senate in the recent elections.

Dela Rosa said he agrees that UN officials should visit the country for them to know they are being misled by their “informants” on the situation of human rights here.

“Come on down and see for yourself. Para magkaalaman. Tingnan natin [So you will know the truth. We will see],” he said.

The neophyte senator also said that if the killings in the drug war are indeed state-sponsored, the PNP would not have implemented its internal cleansing program to rid the police force of scalawags committing abuse against drug suspects.

He explained that even police officers, not just suspects, also die in drug stings. Data from the PNP earlier showed 50 personnel have been killed in anti-drug operations since July 2016 to June 2019.