Berlin is opening a new addition to its Museum Island complex, a stylish entrance building described by officials as a milestone in a long-term effort to renovate the neoclassical ensemble that is home to treasures such as Babylon’s Ishtar Gate and a famous bust of Egyptian Queen Nefertiti.

Designed by British architect David Chipperfield, the James Simon Gallery was presented to reporters last Wednesday, July 10, and opens to the public Saturday, July 13. Built on a narrow riverside site with a colonnade stretching along the bank, it provides an imposing entrance to the five-museum United Nations Educational, Scientific and Cultural Organization (UNESCO) world heritage site. 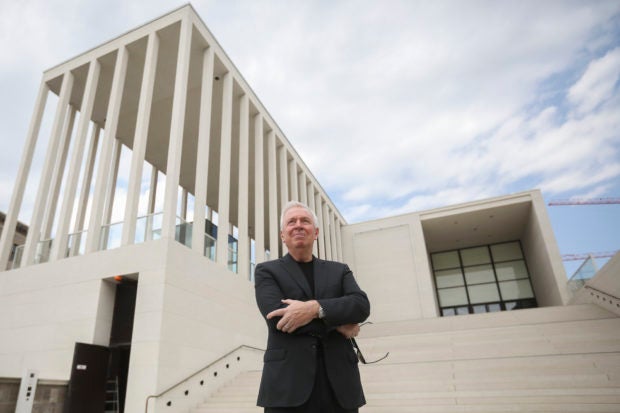 Architect David Chipperfield poses outside of the James-Simon-Galerie at the Museumsinsel, Museums Island, in Berlin, Germany. Image: AP/Markus Schreiber

The building includes exhibition space but is meant largely to make the museums more user-friendly, providing facilities such as a cafe, shop and auditorium that are lacking in buildings such as the Pergamon Museum and Neues Museum.

Parts of it were badly damaged during World War II, and cash-strapped communist East Germany never fully restored it. Work on three museums has now been completed — including the Neues Museum, home to Nefertiti, which was half-ruined before being restored by Chipperfield. Renovation is underway at the Pergamon Museum, home to the Ishtar Gate and the Pergamon Altar, the latter currently closed to visitors. 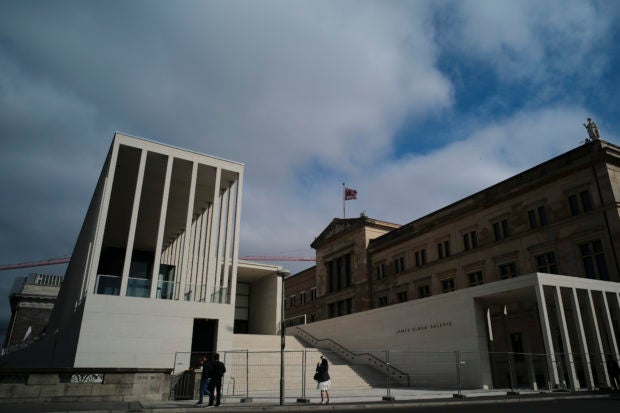 A woman takes a photo of the James-Simon-Galerie in Berlin, Germany, Wednesday, July 10, 2019. Image: AP/Markus Schreiber

“Even if we still have a long road before us to complete the Museum Island, the opening of this building is still a historic moment” as it is the only new addition, said Hermann Parzinger, the head of the foundation that oversees Berlin’s public museums.

The building is named after Jewish collector and benefactor James Simon, who died in 1932 and donated some 10,000 objects to Berlin museums over the years, including the Nefertiti bust.

Officials said the museums would not be what they are without Simon, and Parzinger said the name is also a tribute to “the many other, mostly Jewish, patrons of the late kaiser era and the Weimar era who did an infinite amount for culture in (…) Germany, in Berlin.” RGA