The largest ancient sphinx in the Western Hemisphere was on the prowl Wednesday, June 12, for the first time in nearly 100 years.

Philadelphia’s Penn Museum relocated its 3,000-year-old sphinx of Pharaoh Ramses II from the Egypt gallery, where it had resided since 1926, to a featured location in the museum’s new entrance hall. 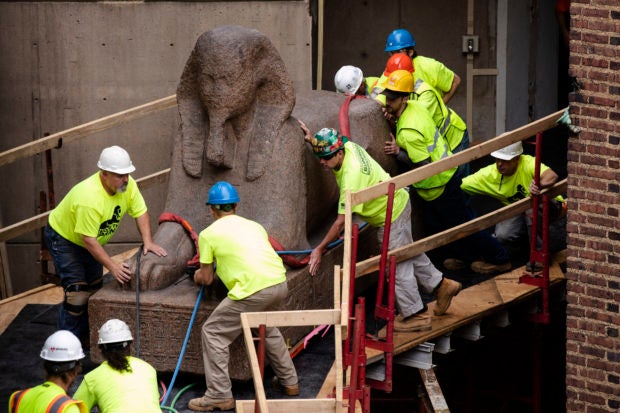 Workers used air dollies to painstakingly maneuver the priceless artifact up a specially constructed ramp and through a series of doorways, windows, sharp turns and tight squeezes, a distance of about 250 feet.

The sphinx was as inscrutable as ever throughout. Museum officials, on the other hand, were a little more animated.

The monument, which was carved out of a single block of red granite and has the head of a man and the body of a lion, was unearthed in 1913 by famed British archaeologist Sir William Matthew Flinders Petrie, whose excavations the museum funded. It was relocated as part of the museum’s extensive, multi-year makeover.

“We needed something very powerful right when you walked into this renovated space, and that is when we said, ‘What a shame we can’t have the sphinx here. It would be perfect,'” Siggers said. “The received wisdom was it was impossible to move.”

The museum’s unofficial mascot underwent 3D imaging to determine its weight and density so that engineers could determine what would be required to move it.

As predicted, Wednesday’s journey took several hours. It will be lifted onto its new base Thursday, June 13.

“This move was so carefully orchestrated,” said associate curator Jennifer Houser Wegner, who co-wrote a book on the sphinx. “I felt very confident, knock wood, that things would go according to plan.” RGA/JB

Read Next
NBI to Kapa members: Be thankful we have a very smart President
EDITORS' PICK
Smart three-peats as country’s fastest mobile network – Ookla
Would the military allow me to stay this long if I’m inutile? – Duterte
In good spirits: SMDC helps farmers and residents through Kadiwa Market
Pre-order the new vivo Y20s [G] to get a free TWS earphone
65% of Filipinos say Duterte’s health should be made public – SWS
DSWD chief admits ‘slow start’ in distribution of aid in ‘NCR Plus’
MOST READ
Vico Sotto frets getting photos of ‘butt vaccination’ from Pasig dwellers
Metro Manila to have shortened curfew hours from 8 p.m. to 5 a.m. under MECQ
San Miguel Corp. continues to invest heavily in the Philippines’ future
COVID-hit Roque slams ‘un-Christian’ query on how fast he secured hospital bed
Don't miss out on the latest news and information.