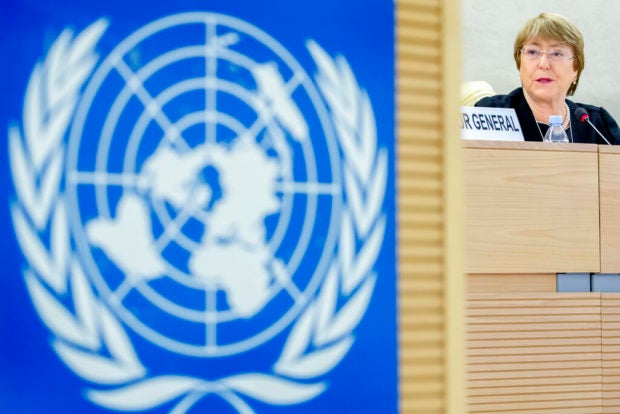 FILE – U.N. High Commissioner for Human Rights Chilean Michelle Bachelet speaks during the opening of the 41th session of the Human Rights Council, at the European headquarters of the United Nations in Geneva, Switzerland, Monday, June 24, 2019 (Magali Girardin/Keystone via AP)

MANILA, Philippines — Senator Ronald “Bato” dela Rosa on Thursday said he is getting tired of allegations of human rights violations in the country, amid calls for the government to allow the United Nations Human Rights Council to investigate the issue.

The neophyte senator was the chief of the Philippine National Police when President Rodrigo Duterte first declared the war against the illegal drug trade, which has since been condemned by several rights group, upon assuming office in 2016.

“Matagal na ‘yan eh, Ilang years na ‘yan. Wala naman nangyayari (That is an old issue that has lingered for years. Nothing has happened),” he said.

Dela Rosa said these groups only want to project that the alleged extra-judicial killings in the country are state-sponsored and that the country does not do anything to address the alleged abuses by the police.

But for dela Rosa, anyone who would say the government does not address these alleged violations is a “hypocrite.”

“Wala bang ginagawa ang gobyerno natin diyan? Pinapabayaan ba ‘yan? Kung sabihin mong wala, well, hypocrite ka (Is the government not doing anything about it? Is it being neglected? If you say yes, you are a hypocrite),” he said.

According to dela Rosa, the number of police officers jailed due to alleged abuses during operations proves that the government does not tolerate or sponsor human rights violations by state security forces./ac