EcoWaste Coalition and Mother Earth Foundation Inc. each got $200,000 or around P10 million from the United States to spearhead programs to fight plastic pollution in the country.

U.S. Embassy in the Philippines Deputy Chief of Mission John Law said it is vital to involve local communities in leading the solutions to combat plastic pollution, which, he said, was “increasing at an alarming rate.”

The grant – awarded to the two environmental groups in a ceremony at the Bulwagang Ninoy Aquino of the DENR Biodiversity Management Bureau in Quezon City – is part of the Municipal Waste Recycling Waste Program of the United States Agency for International Development (USAID).

“Unfortunately, the flow of this plastic pollution into the oceans is increasing at an alarming rate. That creates an urgent challenge for the entire world community. So while this challenge is global, what you see in the Philippine government is: The solutions can and must be local,” Law said.

“Effective recycling and waste management systems depend on community-led awareness racing and education campaign, private sector initiatives, and solutions and local government support for that ability to collect, to manage waste,” he added.

Based on a 2015 study titled “Plastic waste inputs from land into the ocean,” the Philippines is the world’s third-largest plastic polluter to the marine environment. 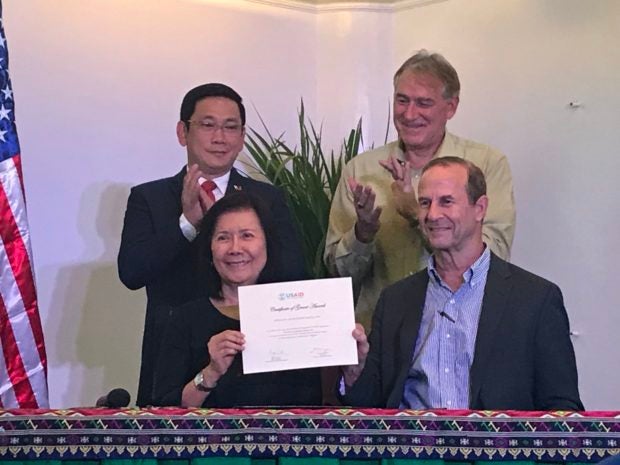 Mother Earth Foundation chair Sonia Mendoza said her group will use the funding to implement a “zero waste” system in 30 barangays in Batangas City. The group’s project will run for 18 months.

“They (USAID) were the ones who chose Batangas, because it’s a coastal city, so to prevent marine plastic litter in the ocean…they chose Batangas,” Mendoza told reporters after the awarding ceremony.

The result of the studies will then be turned over to the Department of Environment and National Resources (DENR) to help the agency craft a national action plan on marine litter, according to EcoWaste National Coordinator Aileen Lucero.

The project will also run for 18 months, Lucero noted. /kga

Read Next
WATCH: Bus catches fire on Edsa
EDITORS' PICK
A gem of a residence in the new normal
Water remains our saving grace right now
Health workers from other regions eyed as ‘substitute’ for NCR frontliners
Smart 5G goes live
PNP: Checkpoints back in MECQ areas
MECQ guidelines in infographics
MOST READ
MECQ guidelines in infographics
MECQ in NCR, other areas: Mass transportation suspended, quarantine pass required anew
Doctors group to Duterte: ‘There was never a call for a revolt’
Want higher pay? Join the police force, Duterte tells nurses
Don't miss out on the latest news and information.