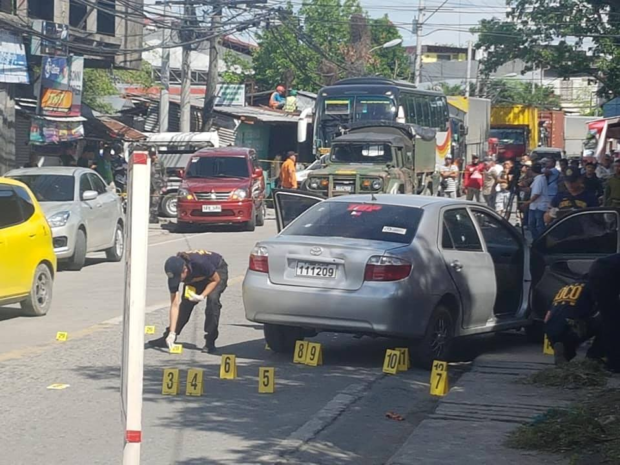 Police investigators sift through the crime scene along Notre Dame Avenue, Cotabato City following an ambush that killed a village chair, his wife and two others. PNP PHOTO

COTABATO CITY –– A village chair of Mamasapano town in Maguindanao province, his wife, and their two companions were waylaid and killed along a busy street in this city on Wednesday, July 10, in what police suspected was a “rido” (family feud or vendetta killing).

Madin said Datu Nurodin died around 6 p.m. Wednesday while being treated in a private hospital here, while the other victims were all declared dead on arrival at the hospital.

Police Colonel Portia Manalad, Cotabato City police director, said six gunmen who were on board three motorcycles opened fire on the victims while Guiaman’s sedan was passing along the busy Notre Dame Avenue, Cotabato City at 1:40 p.m. on Wednesday, July 10.

Scene of the Crime Operatives (Soco) found two caliber .45 pistols inside the victims’ car, believed to have been used to retaliate.

Soco also found about 40 empty shells for caliber .45 and 9-mm pistols in the crime scene.

Police investigators said the ambush could have been triggered by a “rido” involving the village official’s family and another clan in Mamasapano, Maguindanao.

Police were reviewing CCTV footage near the crime scene to help determine the identity of the attackers, Manalad said.