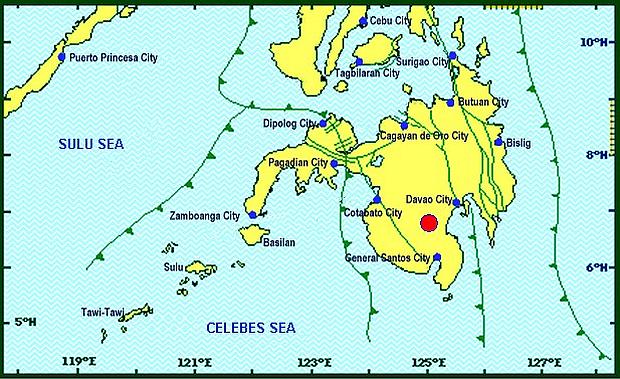 A magnitude 5.3 earthquake struck near the town of Makilala in Cotabato on Tuesday night, July 9, 2019. (Image from Phivolcs)

KIDAPAWAN CITY, Cotabato, Philippines — A magnitude 5.3 quake struck off the town of Makilala in Cotabato on Tuesday night, the Philippine Institute of Volcanology and Seismology (Phivolcs) reported.

The temblor was recorded at 8:37 p.m., with its epicenter located some 20 kilometers southwest of Makilala at a depth of 14 kilometers, according to a Phivolcs bulletin.

The quake jolted Davao City at Intensity 4, just like in the towns of Polomolok, Tupi, Tampakan, Sto. Niño and Quirino, and Tacurong City in Sultan Kudarat; and Glan and Malungon towns in Sarangani.

As the ground shook, people here rushed out of their houses.

At the AJ Hi-Time Hotel here, staff scampered out of the building for safety.

Adelaida Bulahao said that, at the height of the quake, everything in her house in Barangay Kisante, Makilala, Cotabato, appeared to be falling.

In Makilala town, a portion of the wall in the house of Mark Anthony Tayco fell down, although no one was hurt.

No casualties have been reported as of this writing.

Some 30 minutes after the main tremor, an aftershock was recorded at magnitude 2.8, around 9:08 p.m.

Read Next
Beauty queen Saeed: Let’s discuss gender-based violence
EDITORS' PICK
Smart 5G goes live
Water remains our saving grace right now
PNP: Checkpoints back in MECQ areas
Been there, done that but what’s the difference between MECQ and GCQ?
BREAKING: 3,226 latest COVID-19 cases bring PH’s total to 106,330
A gem of a residence in the new normal
MOST READ
MECQ guidelines in infographics
MECQ in NCR, other areas: Mass transportation suspended, quarantine pass required anew
Doctors group to Duterte: ‘There was never a call for a revolt’
James Corden reportedly in talks to replace Ellen as host of the scandal-plagued Ellen DeGeneres Show
Don't miss out on the latest news and information.