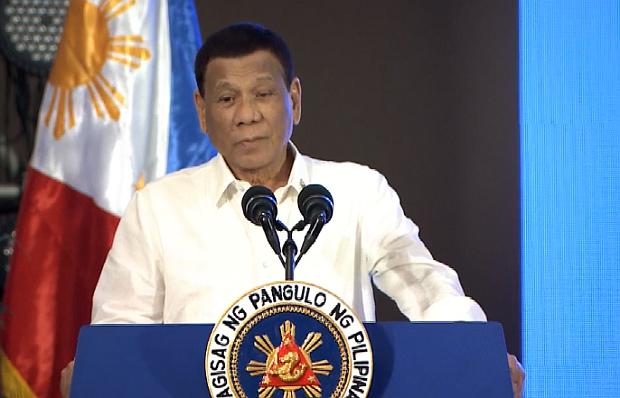 MANILA, Philippines — Sensing “very dangerous times ahead,” President Rodrigo Duterte said on Tuesday the government should continue its efforts in increasing the capabilities of the military and the police.

Speaking at the Manila Hotel during the appreciation dinner for outgoing Speaker Gloria Arroyo, Duterte said he intended to leave Malacañang in 2022 with a strong Armed Forces of the Philippines (AFP) and Philippine National Police (PNP) equipped to face the enemies of the state.

He then asked Congress to support his administration by pushing for measures to ensure a stronger AFP.

“I hope that by the time I make my exit all that would be in place. I am not belittling the events to come, or the person coming in to be the next President. I don’t know who. I’d rather leave with a strong military and police [that are] equipped to challenge the enemies of the state, especially terrorism,” he said.

The President said he could feel his hands “sweating” just thinking of the possibility of dealing with terrorism on a broader scope.

“I see very dangerous times ahead. And I hope that we will be able to contain whatever there is really to… My hands sweat just thinking about [what would happen] if it would go awry outside of Sulu and Basilan Islands,” the President, speaking partly in Filipino, said.

President Rodrigo Roa Duterte graces the Appreciation Dinner for former President and House Speaker Gloria Macapagal-Arroyo in an intimate gathering at The Manila Hotel, City of Manila on July 9, 2019.The event is attended by close friends and other invited guests by the former President.A strong figure in the Philippines' political arena, the former President turned 2nd District of Pampanga Representative was elected as House Speaker during the 17th Congress in a vote made by 184 over 243 House members.Under her stern leadership, the House of Representatives (HOR) reached a milestone achievement by passing 250 new laws out of 880 measures passed from 2,500 measures processed in less than a year since she took over as House Speaker. She is also the first female House Speaker to serve the HOR. #ComfortableLifeForAll#PartnerForChange#DuterteLegacy

Though acknowledging that AFP had already acquired valuable assets, the President insisted that there were still “instruments” needed in fighting terrorism.

He said he might call for a discussion on how the government would face terrorism in the years to come.

“One of these days, I will call for a time to talk at ease and we’ll talk about it because it is really needed by the country,” he said.

The President made the remark just a week after he asked whoever his successor would be to sustain the AFP Modernization Program and take care of the needs of uniformed personnel.