PARIS – The Vatican said Monday it has decided to lift the diplomatic immunity of its ambassador to France, who is accused of groping and inappropriate touching by multiple men. 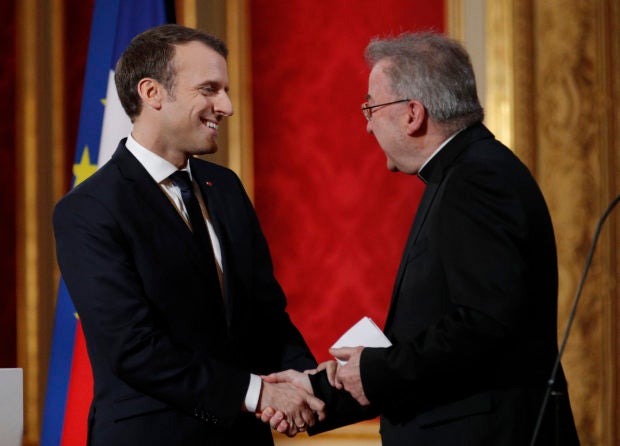 FILE – In this Jan.4, 2018 file photo, French President Emmanuel Macron, left, greets Apostolic Nuncio to France Luigi Ventura during his New Year address to diplomats at the Elysee Palace in Paris. France’s foreign ministry says that the Vatican has decided to lift the immunity of its ambassador in France Archbishop Luigi Ventura, who is accused of sexual assault. (Yoan Valat, Pool via AP, File)

The announcement followed the French Foreign Ministry saying earlier in the day that it “received confirmation from the Holy See of a waiver of immunity” so Archbishop Luigi Ventura could be properly investigated.

The Paris prosecutor’s office has opened an investigation into alleged sexual aggression by Ventura. The Vatican has said its envoy was cooperating, but one of the accusers, Mathieu de La Souchere, asserted last week that the probe was essentially stalled over the immunity question.

Speaking to The Associated Press on Monday, de La Souchere said he was “astonished” by the Vatican’s decision.

“I had been told that the fight was lost in advance and (am) happy because we will be entitled to a trial,” he said.  “Now, a new fight opens: the judicial fight.”

Ventura has repeatedly denied wrongdoing. His whereabouts are unknown, but he attended a meeting at the Vatican last month of all the Holy See’s apostolic nuncios, or ambassadors.

Ventura did agree to investigators’ request to take part in a “confrontation” with his accusers in May, according to French media reports. All accused him of putting his hands on their buttocks, sometimes repeatedly, or making other inappropriate gestures.

The Vatican invoked immunity for a high-ranking churchman during the recently concluded trial in France that convicted French Cardinal Philippe Barbarin of failing to report an admitted pedophile to police. A Vatican official, Cardinal Luis Ladaria, also was accused in the case.