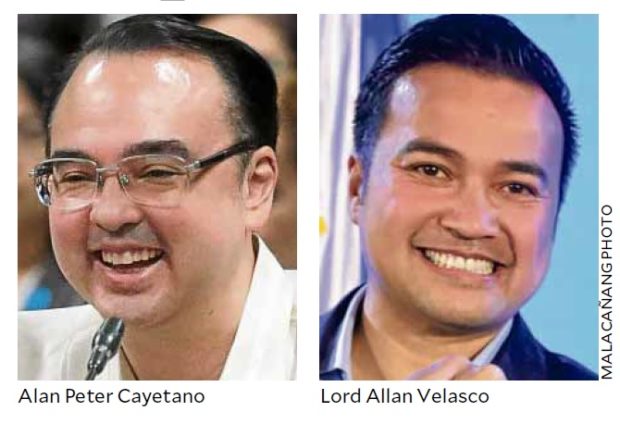 MANILA, Philippines — President Rodrigo Duterte on Monday ended the squabbling among his allies over the leadership of the House of Representatives by endorsing his 2016 vice-presidential running mate, Alan Peter Cayetano, as the next Speaker.

The President announced his choice of Cayetano, the representative of Taguig City, right after the oathtaking of newly appointed government officials in Malacañang.

“I think it’s about time I talked. Your Speaker will be Alan Peter Cayetano,” he said.

“He will share the term with (Marinduque Rep.) Lord (Allan) Velasco and (Leyte Rep. Martin) Romualdez will be the majority leader,” the President added.

The three representatives had been locked in a rackety rivalry for the speakership since the close of midterm elections in May that the President’s allies dominated.

There had been talk of endorsements by the President’s influential daughter, Davao City Mayor Sara Duterte, and threats of disengaging with the administration alliance in the House, but no expressions of willingness to leave the matter to the members of the chamber to decide according to the Constitution.

The President had avoided getting involved in the contest for the speakership, but decided to step in, he said on Monday, because it was “creating so much uncertainty.”

“They went here. I called for them. This has to stop,” he said. “I’ll now talk. I put them in their places.”

The President apologized to his audience for coming late, saying he had to meet with the three contenders for the House leadership.

“I tried to distance myself, but apparently it’s time I talked. So that’s how the setup will be,” he said after announcing the term-sharing between Cayetano and Velasco and the choice of Romualdez as majority leader.

The President said his helping to choose the next Speaker was not interfering with the affairs of the House.

“We are just talking about the leaders, it has nothing to do with the independence of the legislative body. Up to that point it’s all politics,” he said.

It was unclear whether Davao City Rep. Isidro Ungab, the latest to be endorsed by Mayor Duterte, would have a big role in the House.

In a statement, Malacañang said Cayetano would lead the House for the first 15 months of the 18th Congress.

“[T]hen the next 21 months, the Speaker will be Lord Allan Velasco, with Martin Romualdez as the majority … leader,” presidential spokesperson Salvador Panelo said in the statement.

Panelo said President Duterte decided to “oblige the request of the three candidates” for him to choose a favored candidate “to save the unity of the alliance and avert its fragmentation.”

Panelo had spoken with Romualdez and learned from him that the three contenders met in Davao City during the weekend and decided to seek presidential intervention to break the deadlock.

The three candidates “agreed to respect the choice of the President,” Panelo said.

Sen. Aquilino Pimentel III, president of Partido Demokratiko Pilipino-Lakas ng Bayan (PDP-Laban) who endorsed the candidacy of Velasco as Speaker, said the term-sharing was a good way of resolving the contest.

PDP-Laban had been open to term-sharing, he said.

“We made our own term-sharing proposal to resolve the issue of House Speaker. But if the President himself has resolved the issue, then great,” Pimentel told reporters through Viber.

Cayetano, who served as foreign secretary before running for the House, took to Facebook on Monday afternoon to thank Mr. Duterte for choosing him as Speaker.

He urged other members of the House to join the “diehard Duterte supermajority.”

“We’re going to show that it’s not only the President who can show political will, but also the House of Representatives,” Cayetano said.

He also vowed to strengthen the House’s relationship with the Senate, the judiciary and Malacañang.

After his speech, President Duterte said the incoming leaders of the House should amend the 1987 Constitution, if they wanted to, during his term.

“We have to change the Constitution, whether federal or whatnot,” the President said.

“‘If you want to change the Constitution, do it now while I’m still here,’” he quoted himself as telling the three congressmen.

He said the amendment was necessary to avoid an uprising by the military, which, according to him, was “really hot on it.” —With reports from DJ Yap and Leila B. Salaverria

Read Next
New Clark City: Development for whom?
EDITORS' PICK
New strategies urged to improve public transport
Chaos as thousands return to work in Metro Manila
Cherry Mobile teams up with Cloud Panda PH, launches online store
Leveling up your ‘lutong bahay’ with the kitchen companion you never knew you needed
Senate OKs on 3rd reading bill allowing school opening after August
Someone from the Philippines can become $356 Million richer this Tuesday
MOST READ
‘If I had not been SolGen, I will make you eat your words,’ Calida tells Coco Martin
51 percent of German firms holding back investments in PH, but not because of COVID-19
Chaos as thousands return to work in Metro Manila
Restaurant dine-in operations approved in MGCQ areas
Don't miss out on the latest news and information.