New Clark City: Development for whom?

Part of these mountains was just across from their cogon hut, separated only by the Cutcut River that irrigated their fields. “My father and grandmother hid Captain Bruce in one of the natural caves there,” said Muñoz, the 62-year-old leader of the Hungey. “We sheltered him for years.”

There, Alfred Bruce formed and led a squadron of Aeta guerrillas from 1942 until 1944. But Bruce “had to feed himself with stray plants from the mountain,” Muñoz recalled her father saying, “because my own father and aunts didn’t have food.”

To the tribe, whose name means “old blood” in their native tongue, such stories are proof of their inviolable ties to the earth. They have weathered two world wars, martial rule, and the ravages caused by the eruption of Mount Pinatubo in 1991 to their lush 18,000-hectare ancestral land.

But they worry that where nature failed to move them, the unat (lowlanders) might have found a way.

In 2015, Muñoz said, people who refused to identify themselves surveyed the Aeta Hungey’s lands without seeking their permission. The tribe later learned that the visitors were representatives of the Bases Conversion and Development Authority (BCDA). 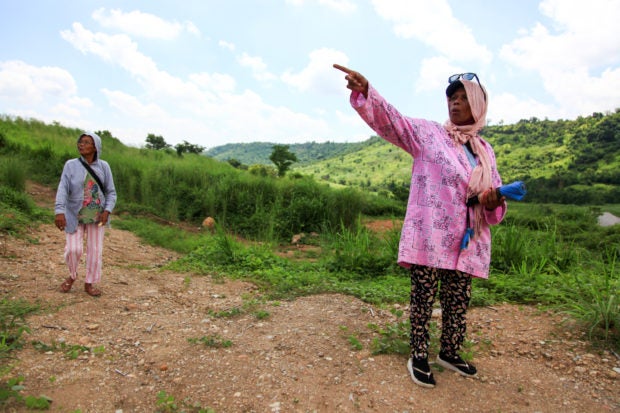 An Aeta leader points out the damages done by the golf course being built inside the land their claiming as ancestral domain.

Muñoz said the BCDA was eyeing parts of Sapang Kawayan and neighboring towns in the 9,450-hectare former US military base that would be developed into a sprawling metropolis called New Clark City (NCC).

Finding the balance between environmental sustainability and inclusivity remains a challenge for the BCDA, the main government agency in charge of the NCC project.

Now, under the Duterte administration’s “Build, build, build” program, NCC is envisioned to be a world-class, smart and climate-resilient city for the younger generation—a city “that provides the quality of life that Filipinos only experience when they live and work abroad,” said BCDA Chair Vince Dizon.

But while NCC — set to formally open on Nov. 6 — is being built for the future, old inhabitants of the land where it stands fear that this vision will eventually cost them their livelihood and ancestral land. 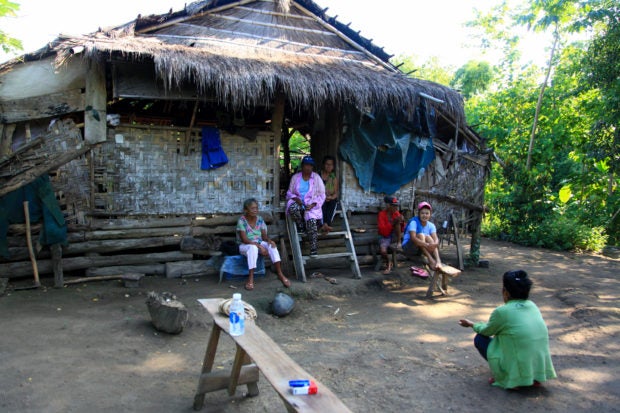 ELUSIVE JUSTICE – The Aeta Hungeys in Sitio Sapang Kawayan, Capas, are worried about the development of a 9,000-hectare “smart, climate change-resilient” metropolis called New Clark City. Crucial to their fight against displacement is a pending certificate of ancestral domain title petition before the National Commission for Indigenous Peoples since 1999, which remains unresolved to this day —PHOTOS BY KATHLEEN LEI LIMAYO, CONTRIBUTOR

The assurances of both the BCDA and the National Commission on Indigenous Peoples (NCIP) that there would be no ancestral domains hit by the development obscure the most obvious struggle for IPs like the Aeta: the difficulty in securing certificates of ancestral domain titles (CADT) to prove their ownership of the land.

“Some communities here have been tilling their lands for more than a century. They have with them the stories of how their forefathers cultivated these lands,” said Andre Ortega, a research fellow at the University of Glasgow who led a field investigation of NCC.

In a collaborative study, Ortega and researchers from the University of the Philippines found that the main issue hounding the communities covered by NCC was lack of security of land, housing and livelihood.

“Although some households don’t register outright their resistance to the development, they still fear possible displacement once the project is completed. They see this type of development as a threat to their means of livelihood,” said Ony Martinez, assistant professor of the UP Department of Geography.

Residents of Barangays Cutcut and Aranguren, for instance, still look to farming as their primary source of livelihood.

“It is not true that the lands here are idle, as the developers claimed. We’ve been planting rice and other vegetables here for as long as I can remember,” said “Lorna,” the 55-year-old matriarch of a family of farmers in Aranguren.

In 2017, when the NCC contractors began building Phase 1A along Aranguren to make way for the National Government Administrative Center, the first batch of farmers convinced by the government and private investors to sell their land were offered two choices: halaman o lupa (crops or land)?

Lorna is one of the few who declined the buyout. She showed these reporters the family’s many claims to their land, including a title given to her grandfather by the Americans that permitted them to till the earth.

“I was lucky because at least I was a little knowledgeable about land claims,” Lorna said, highlighting a common issue among the poorest sector of the country.

But it is unclear until when they can resist the bulldozers, especially since their home is a tricycle ride away from the main NCC area.

Others, like Tito Capitulo, were “simply offered to be compensated for the crops or the value of the land, which would amount to around P300,000,” Lorna said.

Capitulo, also an Aeta Hungey, heads one of the 12 households that lived along Phase 1A. For years he lived on the land passed on to him by his parents, and used the crops to sustain his family.

But last year, he was told to relocate to Cutcut in exchange for P270,000—the total estate value of his land, part of which was supposed to be turned into a golf course.

Last month, the BCDA opened a Swiss challenge for the development of a 450-hectare parcel into a proposed luxury mountain resort, including an 18-hole championship golf course. 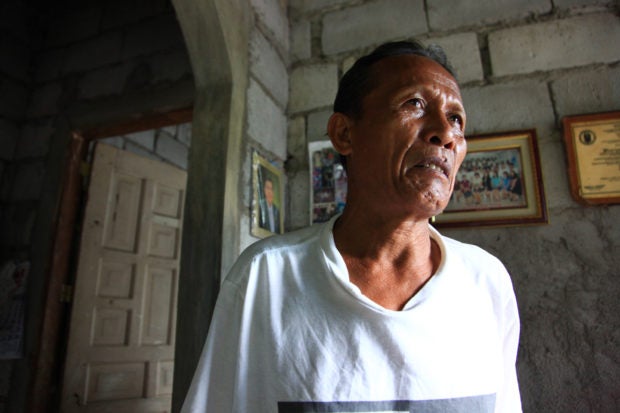 Though the BCDA has not disclosed where it is, it is believed that it would cover the lands of the displaced farmers.

Worse, Capitulo said, his family was advised that they could face relocation again in five to 10 years once the development hits full stride.

“What is the point of being a progressive country?” he said. “In all honesty, if you are truly progressive, there would be no casualties of this development. That for me is real development. But this project? It’s only for their benefit.”

The same is true for the Aeta Hungey of Sitio Sapang Kawayan in Cutcut, who depend on their vegetable and root crops for daily sustenance.

“They’ve been constructing buildings left and right, but we cannot eat those buildings. Here we produce our own food and we never have to worry about it every day,” said Petronila Muñoz.

According to Dizon, NCC will host industries such as manufacturing and business process outsourcing, in the next 10-15 years.

Asked whether this plan would benefit the farming and indigenous communities, Dizon said: “It must. It has to.” 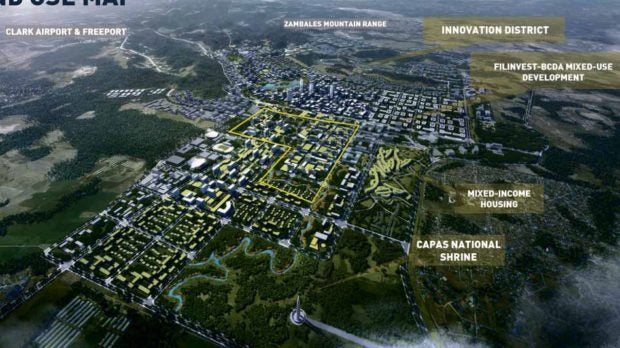 But the massive development plan continues to stir anxiety in Muñoz’s tribe, which has a pending application for a CADT at the NCIP.

According to NCIP Bamban officer in charge Melecio Polon, there are no claims or pending applications for ownership to the lands that would be hit by the NCC development.

But Casimira Maniego said the Aeta Hungey had applied for a CADT thrice for 18,000 hectares of ancestral land in Capas since 1999. The second application was filed in 2014, and the most recent, only last May.

The NCIP refused to acknowledge the document the tribe presented proving its 1999 application for a CADT, she said.

This means that when NCC was launched by the BCDA with its old name, Clark Green City, in 2013, the NCIP had claimed no knowledge of a pending CADT application from the Hungey, said Maniego.

“It is not true that the NCIP does not know there are IPs and an ancestral domain claim in our area. We have the receiving copy of the 1999 document, but they told us they don’t have it in their files,” she added.

In 2018, the tribe filed a complaint against NCIP officials, demanding that the document for their first CADT application be located. Nothing happened.

Now that the impending development of a bridge would once again challenge their historical claim over their land, the council of elders of the Aeta Hungey has submitted these recommendations to the BCDA:

The creation of a committee that would engage in a field investigation of their ancestral land composed of government agencies — the Department of Justice, Commission on Human Rights, BCDA, NCIP, Department of Social Welfare and Development, National Economic and Development Authority, Department of Environment and Natural Resources—and an independent, third-party unit.

A formal dialogue for free, prior and informed consent (FPIC), which the tribe said the BCDA had yet to initiate.

Under Republic Act No. 8371, or the Indigenous Peoples’ Rights Act of 1997, the FPIC serves as the first line of defense of IPs against “exploration, development, exploitation and utilization of natural resources within ancestral domains/land” and prevents displacement and forced relocation of their communities.

With the NCIP’s financial and logistical limitations, the tribe hopes it could raise a legal fund for its CADT application.

“‘What kind of government do you know?’ I told a BCDA representative once,” said Maniego. “The government I know is the one ruled by the people. So how can they tell us that our land can be taken because it is owned by the government? Only death can make us surrender our fight.” 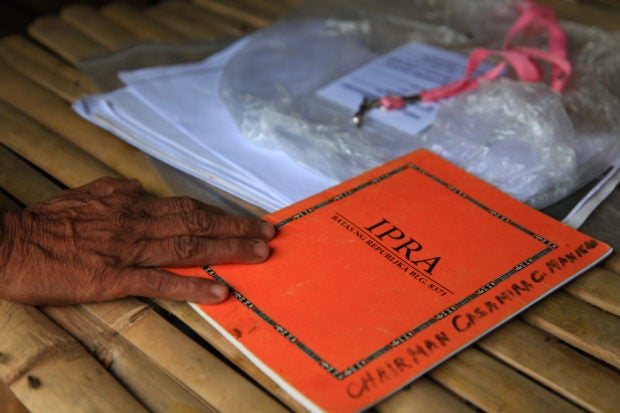 Members of the Aeta Hungey tribe clings to their only copy of the Indigenous Peoples Rights Act—a piece of legislation that’s supposed to protect their rights.

In one of the BCDA’s dialogues with an NCIP-accredited Aeta group, Dizon said he assured the IPs that their lands would not be forcibly taken and that “a relationship built on trust” would be maintained.

Among the old dwellers’ requests are road access, schools, water and power to communities, he said.

“A CADT does not mean you cannot develop [the ancestral land]. But you have to develop it with [their] consent, and develop it with them. They have to be a part of it,” he said.

Dizon said the BCDA was already in talks with the IPs in an ancestral domain that would be affected by road construction.

“They must be compensated. There are houses to be hit, and the government must provide for an alternative relocation site for them,” he said.

But Ortega said a massive urban project like NCC illustrates the double face of development in the Philippines, where new jobs are created but the poor and marginalized are pushed to the fringes.

“People outside the area should realize that under the veneer of urban projects, there should lie solutions to social issues. We have to examine: How would it benefit the poor?” he said.

Ortega suggested building a network of allies—including government agencies—that would work together to ensure that the massive development would be inclusive and sustainable.

Until then, he said, the question for the envisioned smart and green city would remain: For whom is it being developed?