WASHINGTON – President Donald Trump declared himself a champion of the environment Monday, working to boost his standing on climate change and pollution issues in advance of the 2020 election despite having launched some of the most sweeping rollbacks in air, water and other protections in decades. 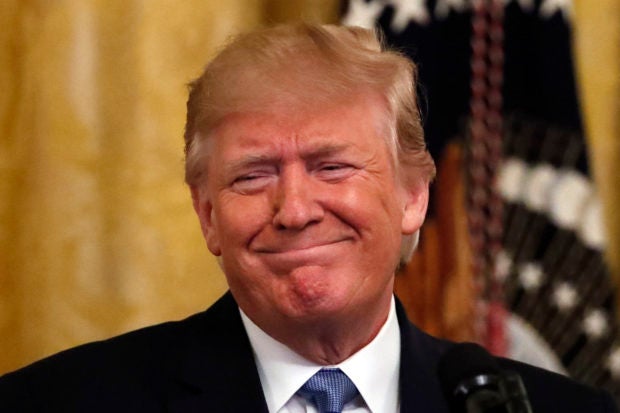 President Donald Trump pauses as he speaks during an event about the environment in the East Room of the White House, Monday, July 8, 2019, in Washington. (AP Photo/Alex Brandon)

Trump’s previous conservation statements have included campaigning to all but eliminate the Environmental Protection Agency and tweets that mocked climate change science.

His administration has focused on propping up the lagging U.S. coal industry and expanding a boom in U.S. gas and oil.

“A strong economy is vital to maintaining a healthy environment,” Trump declared, saying he was balancing business-friendly oversight with public health and conservation protections.

Cabinet members stood and applauded the president’s remarks and then went to the East Room podium, one-by-one, to attest to his dedication to conservation. The president also brought to the stage a Florida bait and tackle shop owner, Bruce Hrobak, who praised what he said were the administration’s efforts against water-fouling algae before pumping his fist in the air and declaring, “Trump 2020.”

Former government regulators and environmental advocates said Trump’s promotion of its environmental record strained credulity, coming from an administration that has moved to weaken several landmark U.S. protections for air and water and roll back Obama-era efforts against climate change.

“Trump’s environmental record is such a toxic disaster it should be declared a Superfund site,” said Carol Browner, who led the Environmental Protection Agency during the Clinton administration.

The White House is recognizing that “the majority of folks in the country are now beginning to pay attention to climate issues and environmental issues,” said Mustafa Santiago Ali, a former longtime official in the Environmental Protection Agency’s office of environmental justice.

Administration officials are “trying to reframe the conversation to make people think they’ve done something to better protect them. And unfortunately they haven’t done a single thing,” Ali said. He pointed to EPA estimates that proposed rollbacks for fossil fuel emissions will cause thousands of additional deaths annually from air pollution.

In the view of a former senior EPA transportation engineer, Jeff Alson, the administration’s claims of environment leadership are “truly Orwellian.” Alson has accused the administration of fudging data to support easing vehicle mileage standards.

Polls show Americans increasingly identify the environment and climate change as priorities — although below other issues like the economy and health care. Environmental issues are a much bigger concern for Democrats than for Trump’s Republican base.

Trump said he was focused on “practical solutions” while many Democrats in Congress were supporting the plan to curb climate change called the Green New Deal.  “It’ll crush the dreams of the poorest Americans and disproportionately harm minority communities,” Trump said, providing no details. “I will not stand for it.”

As a candidate, Trump campaigned on a pledge to eradicate all but a “little bit” of the EPA.

As president, he routinely has proposed cutting the agency’s budget by almost one-third. Both Democratic and Republican lawmakers have blocked the proposed cuts.

The administration has initiated dozens of regulatory changes, at times proposing cutting rules even more than regulated industries requested, as in the case of mileage standards.

The biggest changes include easing federal Clean Water Act protections for millions of miles of waterways and wetlands, a cut welcomed by developers and many farmers. Other changes would ease regulation and support the coal industry and oil and gas companies, sources of heat-trapping fossil fuel emissions and air pollutants.

Trump has pulled the United States out of the Paris climate accord and dismissed federal scientists’ warnings on climate change. In tweets, he has mockingly hoped for more global warming during winter cold snaps. /gsg