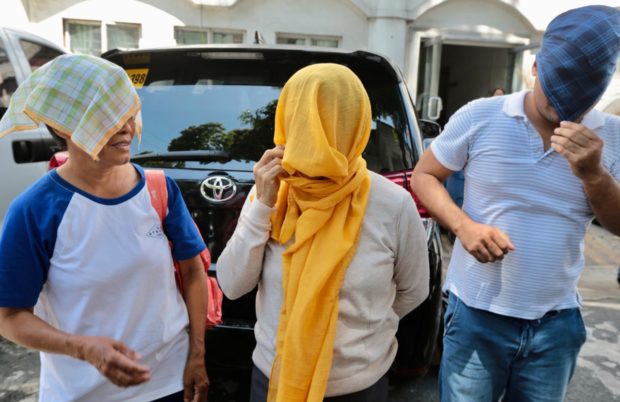 Three Kapa investors cover their faces in facing the media after filing a complaint together with the NBI against Kapa community ministry international, INC founder and 13 officers and employees for eight counts of syndicated estafa. INQUIRER/GRIG C. MONTEGRANDE

MANILA, Philippines — Only three of the reported 3 million members of Kapa Community Ministry International Inc. have agreed to act as witnesses to the criminal complaint for large-scale estafa filed against founder Joel Apolinario and 13 other officials of the alleged pseudo-religious group.

The National Bureau of Investigation filed the complaint with the Department of Justice (DOJ) on Monday based on the sworn statements of the three Kapa members who claimed to have lost a combined P575,000 and of four NBI agents who posed as investors and lost P19,000 to Kapa’s “pyramiding investment scam.”

One of them said he invested a total of P45,000 in Kapa offices in Taytay, Rizal province, and in Quezon City on March 13. Another said she invested P500,000 in the Quezon City office on May 24.

They said they were lured by Kapa’s promise of a monthly lifetime interest equivalent to 30 percent of the principal.

They could not get their money back since the offices closed down after President Rodrigo Duterte ordered their shutdown on June 8 for running a scam since no legal investment instruments could generate such high returns.

Kapa members have appealed to the President, while their leaders have apparently gone into hiding after the government threatened to arrest them even without warrants.

“This is a pyramiding investment scam. In common and ordinary experiences in life, no business has ever survived and will last in this kind of business setup,” the NBI said.

“The victims here are made to believe that they get [interest that] came from a legitimate source without knowing that the same really came from their coinvestors,” it added.

In its complaint, the NBI accused Apolinario, also Kapa president, and 13 other officials of committing eight counts of syndicated estafa, a nonbailable offense, and five counts of violation of the Securities Regulation Code (SRC).

The DOJ is investigating Apolinario and seven other Kapa officials for violation of the SRC based on the complaint filed by the Securities and Exchange Commission (SEC) on June 18.

The SEC has said Kapa was engaged in a Ponzi scheme since it offers “impossibly high returns” to early investors out of the capital contributed by later investors.

Ponzi schemes collapse when it becomes hard to recruit new investors, or when large numbers of existing investors cash out.

Kapa was soliciting investments without license, in violation of the SRC, according to the SEC.

Under its “self-proclaimed pastor” Apolinario, Kapa described the investments as “acts of religious donation” and the interest payout as “religious blessings,” the NBI said.

“Although there is really no religious activity to speak of, Kapa is using religion to shield its organization from its unlawful solicitation of investments from the public through the employment of deceit, false pretenses and/or fraudulent acts. In effect, Kapa committed syndicated estafa,” it said.

It said Kapa was already having a “financial liquidity problem” even before it was ordered closed last month, since the number of investors was “gradually decreasing.”

The NBI said Kapa had more than three million members, mostly in Mindanao and several offices around the country.