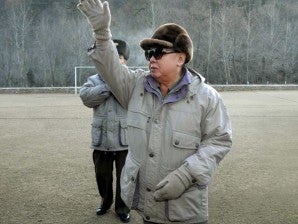 PYONGYANG—North Korea on Monday announced the death of its supreme leader, Kim Jong-il, and urged its people to rally behind his young son and heir-apparent, while the world watched for signs of instability in a nation pursuing nuclear weapons.

South Korea put its military on high alert as it faces the North’s 1.2-million-strong military. US President Barack Obama agreed by phone with South Korean President Lee Myung-bak to closely monitor developments and to cooperate.

In a special broadcast on Monday from the North Korean capital, Pyongyang, state media said Kim died on a train on Saturday due to a “great mental and physical strain” during a “high-intensity field inspection.”

“It is the biggest loss for the party … and it is our people and nation’s biggest sadness,” an anchorwoman clad in black Korean traditional dress said in a voice choked with tears.

People on the streets of Pyongyang wailed when they learned the news that their “dear general” had died of heart failure at the age of 69.

“How could the heavens be so cruel? Please come back, general. We cannot believe you’re gone,” shouted an unnamed woman shown on North Korea’s official television, her body shaking wildly.

“He passed away too suddenly to our profound regret,” said a statement carried by the North’s official Korean Central News Agency. “The heart of Kim Jong-il stopped beating, but his noble and august name and benevolent image will always be remembered by our Army and people.”

Kim, who reputedly had a taste for cigars, cognac and gourmet cuisine, is believed to have suffered a stroke in 2008.

While there was no immediate statement on official succession, there were clear indications that Kim’s 20-something son, Kim Jong-un, would be in charge.

The North said in a dispatch that the people and the military “have pledged to uphold the leadership of comrade Kim Jong-un” and called him a “great successor” of the country’s revolutionary philosophy of juche, or self-reliance.

Korea to abandon its nuclear weapons ambitions, because the untested successor may seek to avoid any perceived weakness as he moves to consolidate control, according to some analysts.

South Koreans expressed concern over the news. A parliamentary official, Lee Kyu-yun, said he was thinking of stocking up food in case of soaring military tensions even as some analysts said Kim’s death was unlikely to plunge the country into chaos because it already was preparing for a transition.

Kim Jong-il indicated a year ago that his little-known third son, Kim Jong-un, would be his successor, putting him in high-ranking posts.

But another analyst said an internal power struggle could break out between Kim Jong-un and his aunt’s husband, Jang Song-thaek, who was elevated in the government last year and likely would be given a caretaker role in the new administration.

“Tension will arise between Jang and Kim Jong-un, because Kim will have no choice but to share some power with Jang,”  said Ryoo Kihl-jae, a professor at the University of North Korean Studies, which is in South Korea.

The North said it would place Kim’s body in the Kumsusan memorial palace in Pyongyang and that his funeral would be held on December 28. No entertainment will be allowed during a 10-day mourning period, and the country will accept no “foreign delegations hoping to express condolences.”

South Korea’s President Lee urged his people to remain calm, while his Cabinet and the parliament convened emergency meetings. The defense ministry said the South Korean military and the 28,500 US troops stationed in South Korea bolstered reconnaissance and were sharing intelligence on North Korea.

The White House said in a statement that it was closely monitoring reports of Kim’s death. “We remain committed to stability on the Korean peninsula, and to the freedom and security of our allies,” the statement said.

The Obama administration may postpone decisions on reengaging the North in nuclear talks and providing it with food aid, US officials said.

Washington had been expected to decide on both issues this week, possibly as early as

Monday, but the officials said Kim’s death would likely delay the process. The officials spoke on condition of anonymity due to the sensitivity of the situation.

For 17 years, Kim Jong-il led his nation through a devastating famine while frustrating the United States and other global powers with an on-again, off-again approach to talks on giving up nuclear arms in return for food and other assistance.

His longtime pursuit of nuclear weapons and his military’s repeated threats to South Korea and the United States stoked worries that fighting might break out again on the Korean peninsula or that North Korea might provide weapons of mass destruction to terrorist movements.

The Korean War ended more than 50 years ago in a ceasefire, but the two sides remain technically in a state of war.

Kim Jong-il took power after his father, revered North Korean founder Kim Il-sung, died in 1994. Few firm facts, however, are available when it comes to North Korea, and not much is clear about Kim Jong-il, the man known as the “Dear Leader.”

North Korean legend has it that Kim was born on Mount Paektu, one of Korea’s most cherished sites, in 1942, a birth heralded in the heavens by a pair of rainbows and a brilliant new star. Soviet records, however, indicate he was born in Siberia, in 1941.

His father, who for years fought for independence from Korea’s colonial ruler, Japan, from a base in Russia, emerged as a communist leader after returning to Korea in 1945.

With the peninsula divided between the Soviet-administered North and the US-administered South, Kim Il-sung rose to power as North Korea’s first leader in 1948. He meshed Stalinist ideology with a cult of personality that encompassed him and his son. Their portraits hang in every building in North Korea, and every dutiful North Korean wears a Kim Il-sung lapel pin.

Kim Jong-il, a graduate of Pyongyang’s Kim Il-sung University, was 33 when his father anointed him his eventual successor.

Even before he took over as leader, there were signs the younger Kim would maintain—and perhaps exceed—his father’s hardline stance.

South Korea has accused Kim of masterminding a 1983 bombing that killed 17 South Korean officials visiting Burma, now known as Myanmar. In 1987, the bombing of a Korean Air flight killed all 115 people on board; a North Korean agent who confessed to planting the device said Kim had ordered the downing of the plane. ﻿