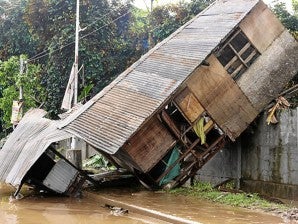 WAYWARD HOUSE A house rests on a wall by the roadside in Cagayan de Oro City, a mute witness to the power and fury unleashed by Tropical Storm “Sendong.” CAI PANLILIO/Inquirer Mindanao

The tragedy that struck the cities of Cagayan de Oro and Iligan was an event waiting to happen. It was foretold three years ago, but was dismissed by lawmakers as “too alarmist.”

Jose Ma. Lorenzo Tan, chief executive of the World Wide Fund for Nature-Philippines (WWF), said Monday the events in Northern Mindanao over the weekend mirrored the prediction. “It was an exact fit,” Tan said.

Environmentalists said a simulation of the effects of extreme weather events from climate change such as saltwater intrusion, sea level rise and intense tropical cyclones, showed that major Philippine cities, including Cagayan de Oro and Iligan, were at risk of massive flooding.

The simulation of the effects of extreme weather phenomena was drafted in 2009 by the Philippine Imperative for Climate Change (PICC), WWF and Filipino scientists.

“At best, this might provide a very rough indicator of areas that may be more vulnerable to sea level rise, storm surge, saltwater intrusion or a combination thereof,” the group’s presentation said.

Nereus Acosta, who headed the PICC and currently serves as the presidential adviser for environment, said the simulation showed that the coastal cities of Cagayan de Oro and Iligan in Northern Mindanao would be ravaged by massive floods from the overflow of river basins and sea level increase.

“Cagayan de Oro and Iligan are vulnerable because they sit near mountain ranges and are coastal areas,” Acosta said. “It would really hit where it hit now.”

The simulations showed water from the sea and the Cagayan River overflowing to cover large parts of the two cities. In Cagayan de Oro, the most affected was the western side, the same area that bore the brunt of Tropical Storm “Sendong.”

In Iligan City, the floods would encroach on the city, according to the simulation. This happened last weekend, Acosta said.

Acosta and Tan said their findings were scoffed at when it was shown to lawmakers three years ago. “They said I was being too alarmist,” Acosta said.

Tan said people should be rightly alarmed by the PICC report. “This is the reality,” he said.

The head of the National Disaster Risk Reduction and Management Council (NDRRMC) said the huge volume of water that Sendong dumped on Northern Mindanao was unexpected.

Ramos said he saw from his helicopter ride with Defense Secretary Voltaire Gazmin that most of the victims lived along the river.

“There are many illegal settlers. I hope the city government did not authorize them to construct houses beside the river,” Ramos said.

Ramos said many of the victims did not heed the weather bureau’s warning about the storm.

An official of the Philippine Atmospheric, Geophysical and Astronomical Services Administration (Pagasa) said the rains brought by Sendong were not the main cause of the floods in Iligan and Cagayan de Oro.

“It’s the topography. The water came from the mountains that’s why it happened so fast,” said Pagasa Deputy Administrator Flaviana Hilario.

“This was not caused by just a simple rain,” she added.

Floods due to rains accumulate slower, according to Hilario. Pictures from the field showed the flood carrying logs, heavy rocks and plenty of mud, an indication that the water came from the mountains, she said.

Sendong moved inland too fast, squeezing the lead time for storm warnings that should be given 36 hours before a storm hits land, forecasters said.

They said Sendong was still outside the Philippine area of responsibility 36 hours before its expected landfall on December 16.

Hilario said Sendong was “too fast,” accelerating to 30 kilometers per hour from 19 kph in 24 hours. This did not afford Pagasa 36 hours of lead time for public storm warnings, she said.

Before it entered the Philippine area of responsibility on December 14, the storm was traveling at 19 kph.

By the time it crossed the boundary and neared Mindanao on Thursday, Sendong accelerated to 30 kph, said Raymond Ordinario, a Pagasa forecaster.

Despite this, Pagasa said it issued several warnings to the public and local officials that a storm was on its way to Mindanao, a region that typhoons rarely visit, as early as Tuesday, December 13.

“There were warnings, flood bulletins. As early as Tuesday, we sent notifications,” Hilario said.

On December 13, Pagasa notified its media partners that a tropical cyclone formed near Guam, which was still too far to affect the Philippines.

On the morning of December 14, Pagasa issued a weather advisory stating that the cyclone was classified as a tropical depression with maximum sustained winds of 55 kph near the eye.

The weather system was spotted 1,480 km east of Southern Mindanao and was moving west at 19 kph. Pagasa forecast that the typhoon would enter the country by late Wednesday evening or Thursday morning.

Ordinario said Sendong, the 19th tropical cyclone to enter the Philippines in 2011, entered the country’s maritime boundary at around 8 a.m. of December 15.

In its 11 a.m. advisory on the same day, Pagasa issued a severe weather advisory that showed the path of the cyclone and the affected areas. No public storm warning signal was set yet.

The agency also predicted that the storm would make landfall in Surigao del Sur province on Friday afternoon. It also said that areas that will be under Sendong’s 400-km cloud cover should expect 10-25 mm of rain. With a report from Dona Z. Pazzibugan