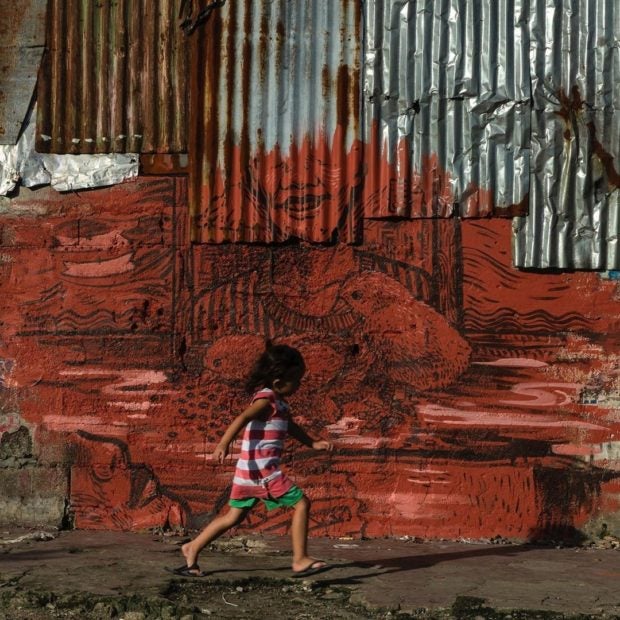 On the cover of the album “Kolateral” is a photo by Kimberly dela Cruz of a girl running before amural.
–PHOTO COURTESY OF SANDATA

MANILA, Philippines — The 12-track independent hip-hop album “Kolateral” begins with a beat similar to a frantic knocking on the door.

After a few seconds, the all-too familiar voice of the President will be heard. “Shoot them dead,” he says.

The stories of victims of the administration’s war on drugs and the family they have left behind are told in this digital Filipino music album, a collaboration between researchers and artists.

There is a track (“Distansya”) about an overseas Filipino worker who had to beg her employer to allow her to come home to her slain child.

Another track (“Pagsusuma”) is about the grim arithmetic of the bloody war on illegal drugs.

Kolateral is an allusion to the concept of collateral damage, said BLKD (read as “balakid,” which means obstacle), one of the 17 artists who collaborated in this album.

The phrase “collateral damage” has been used to refer to innocent people — mostly children — who have been killed during drug buy-bust operations.

Most recently, it has been used to describe the death of a 3-year-old girl. She was killed in the crossfire between drug suspects and the police in Rodriguez, Rizal province.

“[T]he main idea of the album is the weight of collateral damage of the war on drugs that is not realized by common people. We know the killings; we know how many have been killed. But how about the family left behind by the victims? What are the effects (of the war on drugs) that go beyond someone’s death?” rapper BLKD told the Inquirer.

Kolateral is not your run-of-the-mill rap mixtape. It is the product of two years’ worth of research — news reports and community integration — conducted by Sandata.

And hip-hop, as history shows, is not just a music genre about self-expression but also a call to action.

The lyrics of all 12 tracks are nothing short of gut-wrenching, but the producers of the album said everything was based on data.

“We did not want the album to be filled with symbolism. Symbolism from where? You can speak, you can have social commentary, but where is the symbolism coming from? In this album we have research data, we have accounts from families of the victims,” Calix said.

Calix and BLKD have been known on the hip-hop scene as political rappers. They have been writing songs based on qualitative research before. But this is the first time that the duo has written songs backed by both qualitative and quantitative data.

“The facts have been like a double-edged sword,” said Calix.

Sandata had to go through the processed data and assigned specific stories to artists who have been vocal critics of the war on drugs.

“The three of us had to read the research data. We listened to all the recordings of media reports, recordings and interviews released by other news outlets. There were plenty and we had to absorb the trauma of secondhand information. From there, we chose the direction of the album,” said Villalon.

Some listeners of the album have been selective with the tracks, listening only to the songs by their favorite artists or playing the album on shuffle, but Villalon said Kolateral must be heard according to the order of the songs.

“It is important that the whole album be heard according to the arrangement of the songs because it builds up to a story that cannot be found in just one track. Listen to the whole album, all 52 minutes!” she said.

The album cover is a photo by Kimberly dela Cruz of a girl running before a mural.

The red-and-black artwork, which looked like a person viewing a body in a coffin, was painted by street artist Archie Oclos.

On the internet, the Sandata members saw drawings inspired by the tracks, tweets, Instagram stories, even a meme.

Calix and BLKD said this was their first project that had made waves in the short time since the album was released.

Villalon said established poets and scriptwriters had been talking about “Kolateral” on their social media accounts.

“We have reached other circles, not just hip-hop,” said Calix.

Asked if they are worried about intervention from government officials as in the case of Shanti Dope’s song “Amatz,” BLKD said they were unfazed.

“We’ve been making this type of music way before,” he said.