‘What kills is your silence’: Images of since-‘erased’ Sudanese protest art shown in London 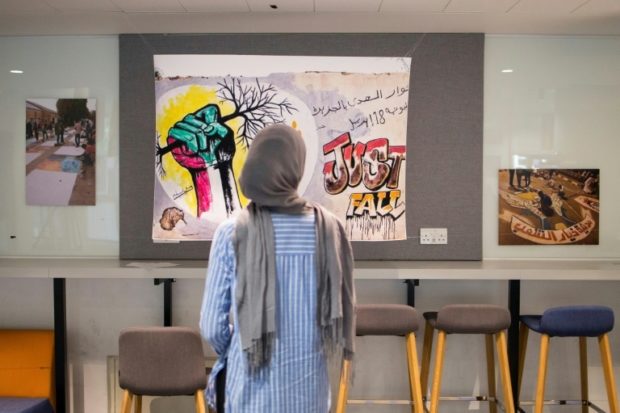 Sudanese anti-government protesters painted blistering images of defiance, raised fists and rallying cries, on the walls at their recent weeks-long sit-in demonstration in Khartoum that ended in a bloody crackdown.

Much of their revolutionary street art was reportedly destroyed and now all that is left are photographs of their work, which are being exhibited at a central London university space turned into a temporary gallery.

“Unfortunately, a lot of this artwork has already been erased… we were lucky enough to have some pictures,” Marwa Gibril, the organizer of the exhibition at SOAS University, told AFP as it opened on Friday, July 5.

The 31-year-old member of the British chapter of the Sudanese Doctors Union said most of the works were painted over during a brutal June 3 raid on a longstanding protest camp that killed dozens of demonstrators and wounded hundreds.

“A lot of creativity came out, it lasted 57 days and after that, it was ruined,” she added. “They painted over (them) with white paint.”

‘It is all gone now’

Jumana Amir, 20, a student in Cardiff, Wales who came to Britain from Sudan aged three, traveled to London to see the 30 or so images on display for two days at SOAS, which specializes in the study of Asia, Africa and the Middle East.

She was already familiar with some of the artworks after glimpsing them in videos of the sit-in protests shared by relatives. 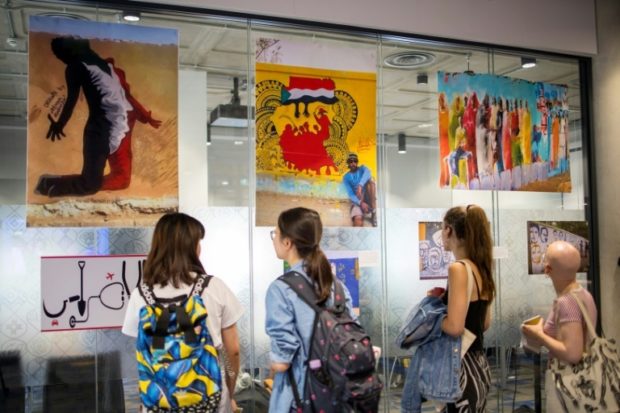 Most of the artworks were painted over during a brutal June 3 raid on a longstanding protest camp. Image: AFP/Tolga Akmen

“Unfortunately it is all gone now but I am here to see it,” she said, wearing the red and green colors of Sudan in her hair braids.

“It made me very emotional,” Amir added. “I really like the ones that are very woman-empowering, because in my opinion women (took) a very big role in the whole revolution.”

Another boldly portrays in black a frowning woman’s face, with the Arabic phrase “the revolution is the voice of a woman” emanating from her mouth.

The piece was signed by Esra Awad on April 24. 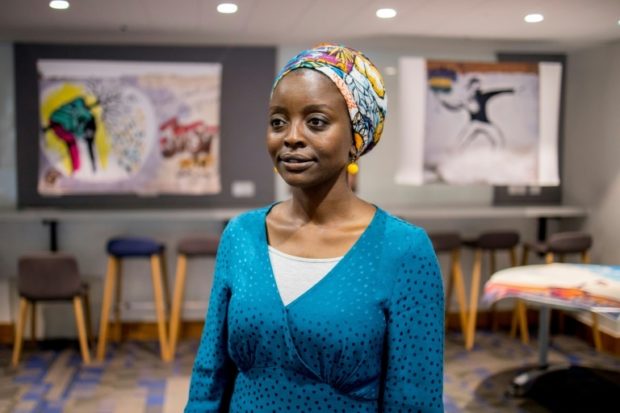 Marwa Gibril, the organizer of the SOAS exhibition, said the street art was “erased” with white paint. Image: AFP/Tolga Akmen

Gibril, the organizer, noted some works were anonymously created while others were signed.

“Some of the artists are known and within the ones who are known some of them are missing after the sit-in,” she said. “They were never found so we do not know if they were alive or dead.”

‘Artists are our biggest weapon’

At least 136 people have been killed in Sudan since June 3, including more than 100 on the day of the raid, according to doctors close the protesters.

The health ministry says 78 people have been killed nationwide over the same period.

Protest leaders and the country’s ruling generals reached a landmark deal earlier this week aimed at turning the page on the months of political unrest.

The sit-in protests, which began on April 6, created something akin to a self-sufficient “state within a state,” according to Sudanese doctor Ahmed Hashim. 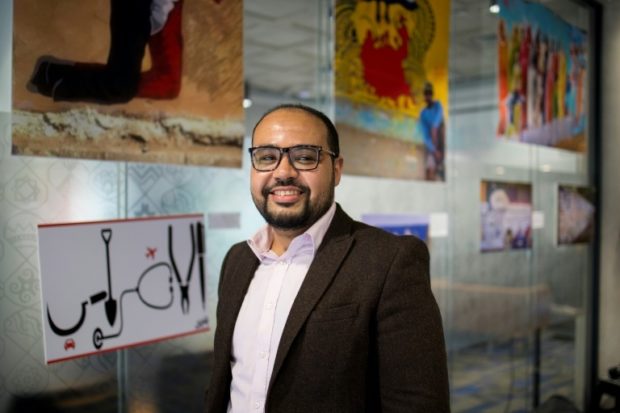 Ahmed Hashim took some of the photos being shown at the exhibition during a brief visit to Sudan in mid-April. Image: AFP/Tolga Akmen

He is based in Great Britain but took some of the photos being shown at the exhibition during a brief visit back to Sudan in mid-April.

“People were painting on the wall but also on the floor,” he recalled. “Every time you go there, there would be people painting. I would say hundreds or thousands of artworks were displayed in the sit-in.”

At least two of the works were said to be inspired by legendary British street artist Banksy.

For Amir, the student, Hashim’s images are giving people beyond Sudan an invaluable insight into the inner workings of the country’s political upheaval.

“Anyone can come and look at this which is why artists are our biggest weapon, it’s a universal language,” she said.

The organizers are also hoping for support as well as an appreciation for the art.

“We are asking for your solidarity, not just your curiosity,” read a statement on an A3 sheet of paper posted at the exhibition.

“Their bullets will not kill us, what kills is your silence,” said another by the exit. HM/JB