DOTr refutes Poe: MRT 3 is not getting worse 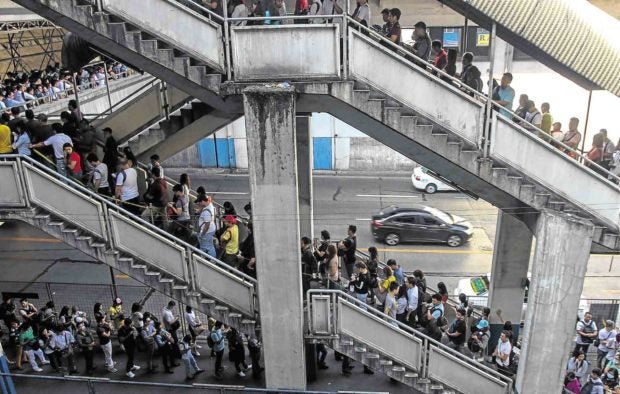 This photo, taken in February 2018, shows long lines of commuters forming at the MRT North Avenue station as a result of frequent breakdowns that reduced the number of operational trains. (File photo by JAM STA. ROSA / Philippine Daily Inquirer)

MANILA, Philippines — After Sen. Grace Poe sought an explanation amid the problems encountered by the Metro Rail Transit Line 3 (MRT-3), the Department of Transport (DOTr) made a clarification — the state of the train line is not worsening.

“First, we would like to clarify, once and for all, that it’s not true that the state of MRT 3 now has deteriorated compared to previous years,” DOTr said in a statement in Filipino.

Earlier, Poe, who chairs the Senate Committee on Public Services, asked why the MRT 3 had seemingly worsened despite the repairs being done on its facilities.

“Almost every week, the MRT has some glitch. Why does it seem that the trains getting worse while they are being repaired?” Poe said in a statement, written Filipino, which she issued after about 850 passengers of the line were unloaded on Wednesday morning due to a defective door in one of its trains.

“The DOTr should explain to the people how it intends to solve this to allay the fears of the passengers,” the senator added.

Over 800 MRT-3 passengers offloaded due to door malfunction

The DOTr denied this, however, saying: “In fact, there has been a great reduction in the number of unloading incidents at MRT 3 compared to last year.”

If it could only “fast forward” time, the DOTr said the public would see the results of improvements on the system would be complete.

The department explained that the following task had to be done:

Addressing Poe, the DOTr said in its statement in Filipino: “We cannot immediately fix the problems that have accumulated and have been neglected over the years. Nevertheless, we are taking all the necessary steps so that we could do that as soon as possible.”

Following its plans, the DOTr said it had been working with the government of Japan to make improvements on the train line, adding that Sumitomo-Mitsubishi Heavy Industries had taken over as the new rehabilitation and maintenance provider of MRT 3.

The DOTr promised that commuters could start seeing the changes in MRT 3 by July 2021.

The changes would include the following: