Jury to decide SEAL’s punishment for posing with corpse 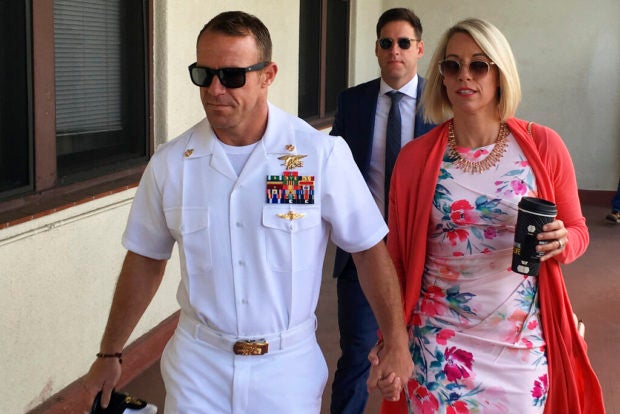 Navy Special Operations Chief Edward Gallagher, left, walks with his wife, Andrea Gallagher as they arrive to military court on Naval Base San Diego, Monday, July 1, 2019, in San Diego. The trial continued Monday in the court-martial of the decorated Navy SEAL, who is accused of stabbing to death a wounded teenage Islamic State prisoner and wounding two civilians in Iraq in 2017. He has pleaded not guilty to murder and attempted murder, charges that carry a potential life sentence. (AP Photo/Julie Watson)

SAN DIEGO — The same military jurors who acquitted a decorated Navy SEAL of murder in the killing of a wounded Islamic State captive under his care in Iraq in 2017 will return to court Wednesday to decide whether he should serve any jail time for the single charge he was convicted of: posing with the 17-year-old militant’s corpse.

READ: Navy SEAL acquitted of murder in killing of captive in Iraq

The final step comes after the verdict Tuesday was met with an outpouring of emotion as the jury also cleared Special Operations Chief Edward Gallagher of attempted murder in the shootings of two civilians and all other charges.

The outcome dealt a major blow to one of the Navy’s most high-profile war crimes cases and exposed a generational conflict within the ranks of the elite special operations forces.

Gallagher could face up to four months imprisonment for the single conviction along with a reduction in rank, forfeiture of two-thirds of his pay and a reprimand.

Having already served seven months in confinement ahead of the trail, the Bronze Star recipient is expected to go home a free man, his defense lawyers said. In the military justice system, the jury decides the sentence.

After the verdict was read, the defense attorneys jumped up from their seats as Gallagher turned and embraced his wife over the bar of the gallery.

Gallagher, dressed in his Navy whites sporting a chest full of medals, told reporters outside court that he was happy and thankful.

“I thank God, and my legal team and my wife,” he said.

He declined to address questions about his SEAL team. His lawyers said he might talk after the jury decides his sentence.

His wife, Andrea Gallagher, who was by his side throughout the court-martial, said she was elated.

“I was feeling like we’re finally vindicated after being terrorized by the government that my husband fought for for 20 years,” Andrea Gallagher said before the couple drove away from Naval Base San Diego in a white convertible Mustang to start celebrating.

She vowed to continue to take action over what she has described as prosecutorial misconduct and a shoddy investigation that led to her husband going to trial. She said she wants Naval Special Warfare Group 1 Commodore Capt. Matthew D. Rosenbloom to resign, among other things.

Defense lawyers said Gallagher was framed by junior disgruntled platoon members who fabricated the allegations to oust their chief and the lead investigator built the probe around their stories instead of seeking the truth. They said there was no physical evidence to support the allegations because no corpse was ever recovered and examined by a pathologist.

The prosecution said Gallagher was incriminated by his own text messages and photos, including one of him holding the dead militant up by the hair and clutching a knife in his other hand.

“Got him with my hunting knife,” Gallagher wrote in a text with the photo.

The defense said it was just gallows humor and pointed out that almost all platoon members who testified against him also posed with the corpse.

Gallagher’s family championed a “Free Eddie” campaign that won the support of dozens of congressional Republicans who brought the case to the attention of President Donald Trump.

Trump had Gallagher moved from the brig to more favorable confinement at a Navy hospital this spring and was reportedly considering a pardon for him.

The panel of five Marines and two sailors, including a SEAL, were mostly seasoned combat veterans who served in Iraq and several had lost friends in war.

Most of the witnesses were granted immunity to protect them from being prosecuted for acts they described on the stand.

Lt. Jacob Portier, the officer in charge of the platoon, has been charged separately for overseeing Gallagher’s re-enlistment ceremony next to the corpse and not reporting the alleged stabbing.