Army general in charge of elite units is next Nolcom chief 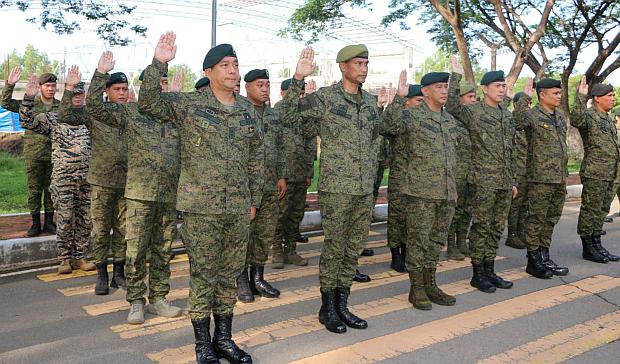 Maj. Gen. Ramiro Rey (leftmost, front) will be the next Nolcom chief. (Photo from the SOCOM Facebook account)

MANILA, Philippines — An Army general in charge of the military’s elite units will soon take the helm of the Northern Luzon Command (Nolcom).

Maj. Gen. Ramiro Rey, commander of the Special Operations Command (Socom), will replace Lt. Gen. Emmanuel Salamat, who is stepping down from military service on Friday as he reaches the mandatory retirement age of 56.

Nolcom, which is based in Camp Aquino in Tarlac City, covers the areas of Northern and Central Luzon. It is also responsible for critical areas Bajo de Masinloc (Scarborough Shoal) and Benham Rise.

“He’s from Tuguegarao [in Cagayan], a Nolcom area, so he knows the language and the people there. He is an excellent leader,” Armed Forces chief Gen. Benjamin Madrigal Jr. told reporters.

As Socom commander, Rey oversees the special operations forces of the Army, Air Force and Navy.

A member of the Philippine Military Academy “Hinirang” Class of 1987, he also served as commander of the Special Forces Regiment (Airborne) and later the Joint Task Group Ranao during the Marawi siege, the Philippines’ biggest security crisis in recent years.

“He led the civil-military operations efforts in Marawi. He talked to the communities and stakeholders while our [military] operations were in progress. He also coordinated with the local government to serve the people so he is an expert in disaster management,” Madrigal said.

Salamat, meanwhile, was recently tapped by President Rodrigo Duterte to head the Metropolitan Waterworks and Sewerage System after his military service.

At the General Headquarters, Commo. Ramil Enriquez was named as the new deputy chief of staff for reservists and retirees, AFP spokesperson Brig. Gen. Edgard Arevalo said in a press briefing.

Enriquez was previously the commander of Naval Forces Eastern Mindanao. That position is now occupied by Commo. Antonio Palces, who was in charge of Naval Forces Southern Luzon prior to his new assignment.

Maj. Gen. Pio Diñoso has also relinquished his post as deputy chief of staff for logistics, to take over the Army’s 8th Infantry Division. He replaced Maj. Gen. Raul Farnacio who retired from service.

“We find this change to be very important because there are no wars that are won without good logistics,” Arevalo said.

Meanwhile, Brig. Gen. Adrian Sanchez will serve as the deputy chief of staff for communications, electronics and information in an acting capacity. He replaced Rear Admiral Jande Francisco who was due for retirement.