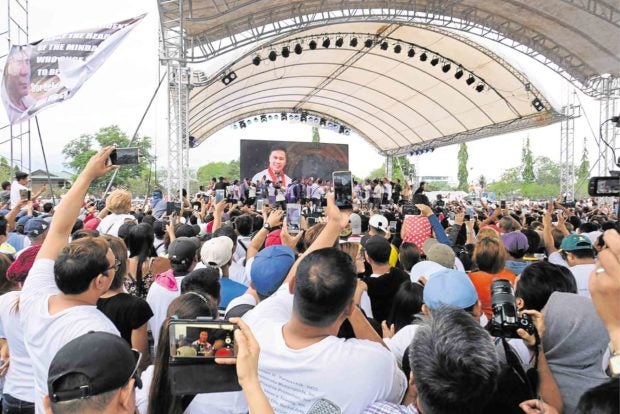 MANILA, Philippines – Justice Secretary Menardo Guevarra on Tuesday warned officials and members of Kapa Community Ministry International (Kapa) that they could be arrested without a warrant if they continue selling investments without a license.

“There is a complaint by the SEC (Securities and Exchange Commission) and there is an alleged violation of the law. If they continue to do so, until now, so that’s a continuing offense. We do not need a warrant for that,” Guevarra said at a press conference.

Under the law, a warrantless arrest is allowed if there is a “continuing offense being committed, in this case, still selling investments even if the SEC already filed a complaint against Kapa for operating as an investment firm without a license.

Kapa officials are already facing a criminal complaint before the Department of Justice.

In its complaint, the SEC accused the respondents of perpetrating an investment scam which violates Sections 8 and 28 of the SRC.

Section 8 of the SRC prohibits the sale or distribution of securities without a registration statement duly filed and approved by the SEC.

Section 28, on the other hand, prohibits any person from engaging in the business of buying or selling securities in the country as a broker or dealer, or act like a salesman, or an associated person of any broker or dealer unless registered with the SEC.

The SEC also found that respondents violated Section 26 of the law that prohibits the Ponzi scheme, an investment program that offers impossibly high returns and pays investors using the money contributed by other investors.

Guevarra said the warrantless arrest may be implemented not only to Kapa officials and board members.