UNITED NATIONS – The U.N. envoy for Myanmar said Monday that progress on alleviating the crisis that led more than 720,000 Rohingya Muslims to flee to neighboring Bangladesh has been slow and if there is no action it will be time to “ring the alarm bell.”

Christine Schraner-Burgener was responding to frustrated speeches and questions from many countries — from Bangladesh to Saudi Arabia to the United States — on the lack of progress in returning Rohingya nearly two years after they fled a violent crackdown by Myanmar’s military. 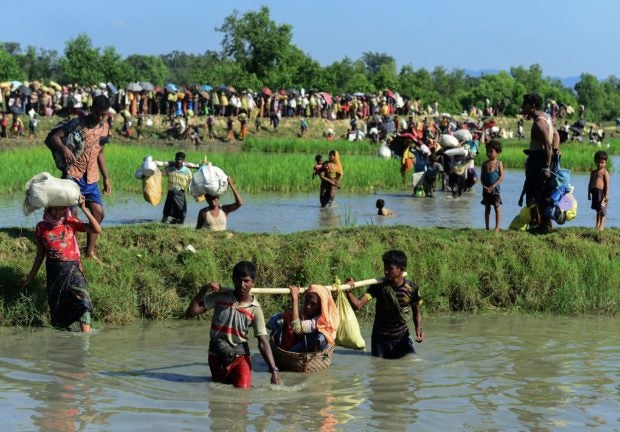 (FILES) In this file photo taken on October 16, 2017 Rohingya refugees carry a woman over a canal after crossing the Naf River as they flee violence in Myanmar to reach Bangladesh in Palongkhali near Ukhia.
Canada on June 25, 2018 announced sanctions in coordination with the European Union against seven senior Myanmar officials over the Rohingya crisis, accusing them of human rights violations including killings and sexual violence.”Today, the European Union and Canada have announced sanctions against some of the key military leaders who were involved in atrocities and human rights violations in Rakhine State, including sexual and gender-based violence,” Foreign Minister Chrystia Freeland said in a statement.  / AFP PHOTO / MUNIR UZ ZAMAN

She told the General Assembly there are “not a lot of changes on the ground,” pointing to “many challenges” including Myanmar’s civilian leaders having “to navigate an extremely difficult environment in which the military continues to have considerable political influence.”

In addition, Schraner-Burgener said, “immense complexities” inside the country have been “an impediment” in addition to the Rohingya crisis.

She cited Myanmar’s 70 years of isolation, 21 armed groups still operating in the country, a lack of development, drug production and human trafficking.

She said her highest priority remains “ending the vicious cycle of discrimination and violence, especially in Rakhine,” the western state that was home to the Rohingya who fled — and where she said 128,000 displaced Rohingya languish in camps, many for nearly seven years.

As a first step, Schraner-Burgener called for more to be done to end fighting in Rakhine between Myanmar’s military and the Arakan Army, a well-trained guerrilla force from the Buddhist ethnic group seeking autonomy for Rakhine. She said the fighting has displaced 30,000 Buddhists and Muslims.

Buddhist-majority Myanmar has long considered the Rohingya to be “Bengalis” from Bangladesh even though their families have lived in the country for generations.

Nearly all have been denied citizenship since 1982, effectively rendering them stateless, and they are also denied freedom of movement and other basic rights.

The long-simmering Rohingya crisis exploded in August 2017 when Myanmar’s military launched what it called a clearance campaign in Rakhine in response to an attack by a Rohingya insurgent group.

The campaign led to the mass Rohingya exodus to Bangladesh and to accusations that security forces committed mass rapes and killings and burned thousands of homes.

Amnesty International accused Myanmar’s military in late May of a new round of widespread human rights violations in its battles against the Arakan Army since January 2019.

The rights group said the military carried out indiscriminate killings of civilians as well as arbitrary arrests and torture, but it also said the Arakan rebels committed abuses against civilians including kidnappings though on a lesser scale.

Schraner-Burgener said the fighting involving the Arakan Army “is having a devastating impact on all local communities caught in the crossfire, independent of their religious or ethnic background.” And “it is also further impacting efforts toward the dignified, voluntary and safe return of refugees,” she said.

U.S. deputy political coordinator Elaine French expressed deep concern that little progress has been made in improving conditions in Rakhine, “while the military’s conflict with the Arakan Army continue to escalate and civilian casualties rise by the day.”

The United States agrees with the U.N. that conditions aren’t conducive for Rohingya refugees to return, she said, and the government’s suspension of internet service in Rakhine “casts further doubt on its commitment to creating conditions that allow people to feel they can live in safety and security.”

Schraner-Burgener said that while there have not been “a lot of changes on the ground … we have to continue because we want to see people who go back have freedom of movement” and access to health and education.

She told diplomats critical of the lack of progress: “I assure you also that I need to see action on the ground. If I don’t see action, I will raise this and will also ring the alarm bell.”

In a positive step, Schraner-Burgener said Myanmar has produced a draft national strategy to close camps for displaced Rohingya with support from international experts, the U.N. and others. But she stressed that this must be part of a larger effort that deals with their freedom to move, get jobs and receive basic services.

Myanmar’s U.N. ambassador, Hau Do Suan, said the government has approved the return of about 13,000 Rohingya from Bangladesh, from two lists totaling over 30,000 Rohingya, and plans to send a high-level delegation to Cox’s Bazar to explain arrangements for repatriation.