Father of 2, deported to El Salvador, allowed to return to US | Inquirer News
Close
menu
search

Father of 2, deported to El Salvador, allowed to return to US

HOUSTON  – A 33-year-old father of two American-born children was allowed to return to the U.S. on Monday, two years after being deported to El Salvador during the first months of the Trump administration. 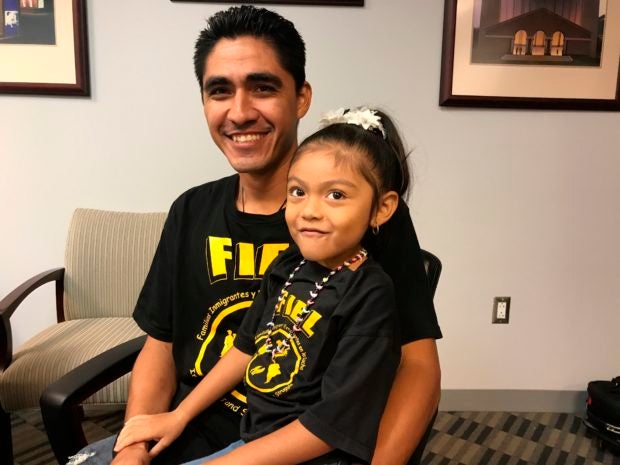 Jose Escobar poses with his daughter Carmen shortly after returning to the United States at Houston’s George Bush Intercontinental Airport, Monday, July 1, 2019, two years after he was deported to El Salvador. Escobar was granted waivers to be allowed back into the U.S. after a public campaign by his family and immigrant advocates. (AP Photo/Nomaan Merchant)

Jose Escobar was welcomed at Houston’s Bush Intercontinental Airport by a group of supporters. He was accompanied by his wife, Rose, and their two children, Walter and Carmen, who had flown to El Salvador in June to visit him.

They were in El Salvador when they got word that U.S. immigration authorities had approved waivers that would allow him to return to the U.S. legally.

Escobar was a teenager when his family settled in the U.S. in 2001 with temporary protected status, which was granted to Salvadorans who were victims of earthquakes that year.

He married his wife Rose in 2006, the same year he learned that his family hadn’t filed the paperwork necessary for him to renew his visa.

He was living in the U.S. without authorization, and an immigration judge ordered his deportation that year. Rose and his children are all U.S. citizens.

Escobar was arrested in 2011 — during the administration of former President Barack Obama — and detained for several months.

After an intense lobbying campaign, the local field office director for U.S. Immigration and Customs Enforcement released Escobar in January 2012 “so he could get his affairs in order,” the agency said last year.

In February 2017, shortly after Trump took office and widened the priorities for detaining and deporting immigrants without authorization, Escobar was arrested during what was supposed to be a routine ICE check-in.

The next month, he was deported to El Salvador. He called his wife from the San Salvador airport to tell her what had happened.

Escobar moved to a town that’s about three hours from San Salvador, living with relatives and working intermittently as a laborer.

He had video calls with his family at night, but he was often scared and worried about leaving the family home, as the gangs roaming the streets were known to target people who had come back from America and once held him up.

He would watch the video from his home’s security cameras remotely.

His children, meanwhile, struggled with the pain of losing their father. And with Jose having trouble making money in El Salvador, Rose Escobar supported the family on her own as a hospital receptionist and relied on savings that were quickly dwindling.

Among the people who pressed his case was U.S. Rep. Al Green, a Houston Democrat. The Escobar family lives in Green’s district and the congressman took his case to heart, continuing to identify Escobar as his constituent even after he was deported.

Green flew to El Salvador to meet with Escobar and later to press his case with consular officials. He presented Escobar with an American flag.

“He’s always going to be my constituent,” Green said Monday.

The Houston-based advocacy group FIEL contacted local attorney Raed Gonzalez, who took up Escobar’s case. He filed paperwork with U.S. Immigration and Citizenship Services requesting waivers that would allow Escobar to return to the U.S., citing the hardship his deportation had placed on Rose.

Those waivers were granted last month.

Gonzalez said people in his office celebrated and cried with joy when the word came. But he also felt disappointed that Escobar was deported in the first place when he could have pursued the same waivers without having left his family.

Green flew to El Salvador on Monday to greet the Escobar family and accompany them to Houston. Escobar carried with him the American flag that Green had brought him earlier.

Sitting in an airport waiting room, Escobar held his daughter in his arms and recounted all the things he had missed while in El Salvador: birthdays, holidays, anniversaries. He already had plans to take the family to the nearby bayside town of Galveston for the Fourth of July holiday on Thursday to eat crawfish and watch fireworks.

He looked at his son, Walter, and recounted how he had made him the man of the house while he was gone.

Rose Escobar, who had called public attention to her husband’s case for more than two years, had tears in her eyes.