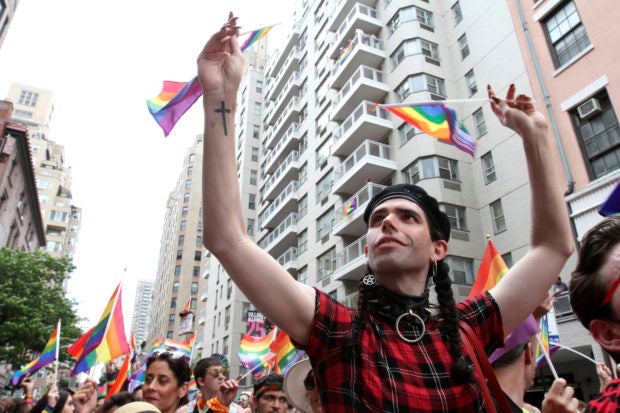 Participants wave flags as they take part in the LGBTQ Pride march on June 30, 2019, in New York. AP

NEW YORK — Crowds and rainbow colors filled New York City streets for possibly the largest parade in the history of the gay rights movement, a dazzling celebration marking the 50th anniversary of the infamous police raid on the Stonewall Inn.

Marchers and onlookers took over much of midtown Manhattan with a procession that paid tribute to the uprising that began at the tavern when patrons resisted officers on June 28, 1969.

Eraina Clay, 63, of suburban New Rochelle, New York, came to celebrate a half-century of fighting for equality.
“Everybody should be able to have the chance to enjoy their lives and be who they are,” Clay said. “I have a family. I raised kids. I’m just like everybody else.”

“We’ve come so far in the past 20 years,” said 55-year-old Gary Piper, who came from Kansas to celebrate Pride with his partner. “I remember friends who would be snatched off the streets in Texas for dressing in drag. They’d have to worry about being persecuted for their identity.

“But now we’re so much more accepted. I’m not saying we don’t have a ways to go, but let’s celebrate how far we’ve come,” he said.

Other cities around the US and the world also marked the occasion with big Pride parades.

In San Francisco, about 40 people interrupted the parade for about an hour and two people were arrested while protesting police and corporation presence.

In Chicago, the city’s first openly gay mayor was one of seven grand marshals. Lori Lightfoot walked alongside her wife and wore a “Chicago Proud” T-shirt.

In Turkey, police dispersed activists who gathered in Istanbul on Sunday to promote rights for gay and transgender people. Turkish authorities had banned the Pride event for the fifth year. /ee