Angat Dam level up slightly, but no reason yet to rejoice 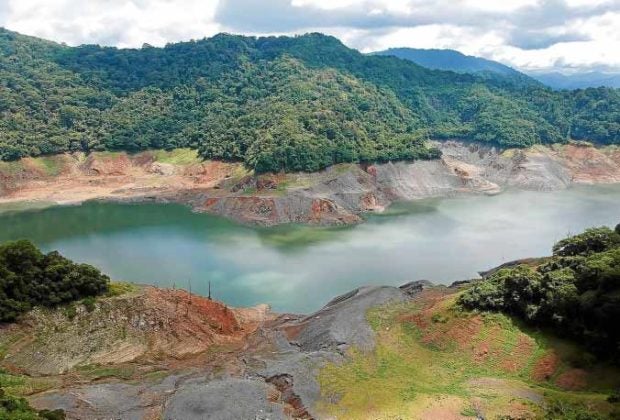 STILL FAR FROM RELIEF It rained for several days but only a slight increase of 0.68 meter was reported on Sunday in the water level of Angat Dam, the main source of water for Metro Manila. Sunday’s reading of 158.64 meters above sea level was still below the critical level of 160. —GRIG C. MONTEGRANDE

MANILA, Philippines — Following weeks of consistent decrease, the water level in Angat Dam slightly went up on Sunday, all thanks to the heavy monsoon rains in the past few days.

Residents reeling from a water shortage across Metro Manila and nearby provinces, however, should not yet fully rejoice as the gradual rise or fall of the water level in the next few weeks would depend on the weather systems that will affect the southwest monsoon or “habagat,” according to the Philippine Atmospheric, Geophysical and Astronomical Services Administration (Pagasa).

As of 6 a.m. on Sunday, the elevation at Angat was recorded at 158.64 meters above sea level (masl), up by 0.68 from the previous day. It marked the first time that the water level rose after it breached the critical level of 160 masl on June 20.

Pagasa hydrologist Richard Orendain said the continuous heavy rains over the dam’s watershed had contributed to the increase.

The watershed is part of the Sierra Madre Mountain Range, near the boundary of Quezon and Rizal provinces, where it rained heavily in the past few days.

“By Monday, even if there is no rainfall, we can expect that the water level will still increase as the water from the mountains will take some time to travel to the watershed,” Orendain told the Inquirer.

The rain showers are caused by the southwest monsoon enhanced by Tropical Depression “Egay,” located east of the country.

While Egay is not expected to make landfall, it will still bring monsoon rains to Metro Manila, Calabarzon, Mimaropa and the provinces of Bataan, Pangasinan and Zambales on Monday.

As of 3 p.m. on Sunday, it was spotted 565 kilometers east of Casiguran, Aurora province, and was moving west-northwest at 30 km per hour.

As a tropical depression, it is a weak storm, as it packs maximum sustained winds of 55 kph near the center and gustiness of up to 65 kph.

Egay is expected to exit the Philippine area of responsibility by Wednesday.

Orendain said the monsoon might weaken, which means less rain, if no other low-pressure area (LPA) would build up after Egay.

“Frankly speaking, the increase in the Angat Dam may not continue once we have a monsoon break. But if we have another LPA after Egay, then the rains may persist,” he said.

The state weather bureau is monitoring another LPA, this time over the West Philippine Sea.

“But it may only bring a few rain showers because it will pull the clouds toward its center, so instead of the rain falling on the western side of the country, we might even have fewer showers,” Orendain said.

The new LPA may bring rains to the western section of northern and central Luzon, but only light rains to Metro Manila and the Visayas.

Due to the uncertainty over Angat Dam’s water level, Orendain advised the public to conserve water as service interruptions may continue across the metropolis and adjacent provinces.

He said the watershed needed about 370 millimeters of rainfall during a single occasion to raise it to the normal operating level of 180 masl.

The middle of July often marks the recovery period for Angat, as more and more rains begin to replenish the depleting stock.

Orendain noted that the Metropolitan Waterworks and Sewerage System had not yet drawn water anew from La Mesa Dam even if it had benefited from recent rains.

On Sunday, La Mesa’s water level was recorded at 71.5 masl, up by 0.55 meters from the previous day. Its low critical mark is at 69 masl.

Consumers hit by the service interruptions had been patiently hoping for more rains over the watershed.

Several areas in Metro Manila and nearby provinces, such as Cavite, had been reeling from 12 to 17 hours of no water supply due to the receding water level in the dam, after the National Water Resources Board slashed the water supply to 36 cubic meters per second from the original 46 cms.