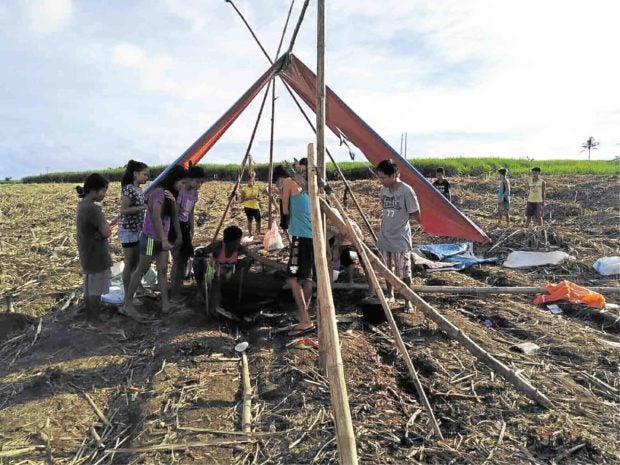 Farmers and relatives inspect the makeshift shelter at a sugarcane plantation in Sagay City, where nine farmers died following an attack by armed men on Oct. 20, 2018. (Photo by BRYAN MORDEN)

MANILA, Philippines–The Department of Justice (DOJ) has dismissed the complaint filed against a human-rights lawyer accused of kidnapping a teenage boy who is a key witness in the 2018 Sagay City massacre.

In a resolution, Assistant State Prosecutor Ferdinand Fernandez dismissed the case based on the testimony of the mother and the minor who said that they went with Atty. Katherine Panguban, head of the Women and Children Committee of the National Union of People’s Lawyers (NUPL) on their own free will.

“Both of them [mother and son] responded that it was their free will to voluntarily submit their custody to respondent [Panguban],” the resolution cited.

“With this statement the elements of kidnapping and serious illegal detention allegedly committed by respondent negated complainant’s statement in his complaint,” Fernandez said.

The minor, according to the police is a key witness in the October 20, 2018 killing of nine members of the National Federation of Sugar Workers (NFSW) inside Hacienda Nene in Sagay City, Negros Occidental.

The boy was taken into custody by the Sagay City Social Welfare and Development (CSWD).

The minor’s father was the one who filed the complaint against Panguban.

NUPL earlier said that the father was used by the police to get the boy into their custody.

Panguban had earlier said the boy was taken into police custody and made to sign a sworn statement concerning the massacre without the presence of a lawyer and without the consent of his guardians or parents. (Editor: Jonathan P. Vicente)