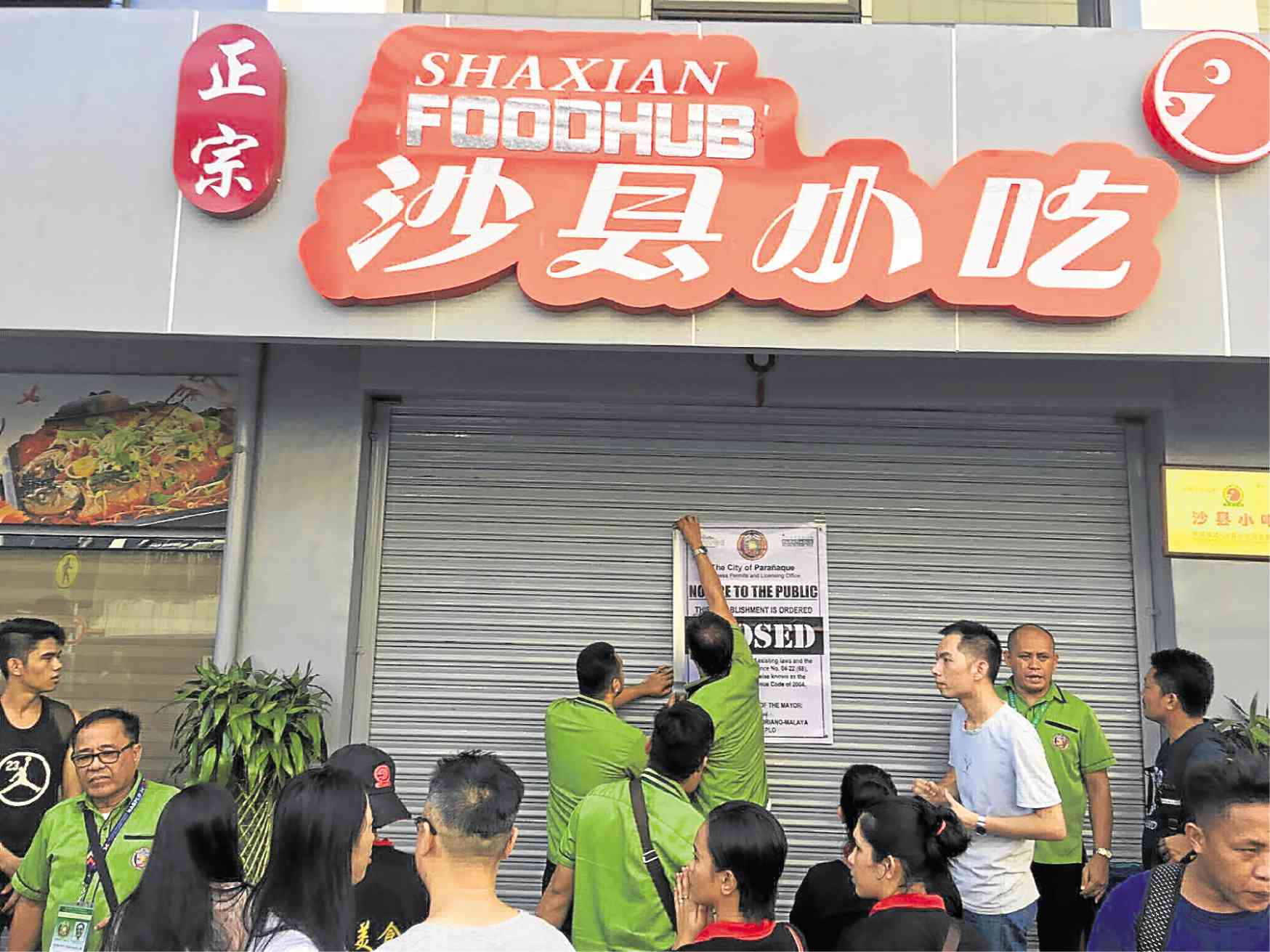 CLOSED FOR BUSINESS As workers and clients of one of the erring Chinese restaurants look on, officials of the Parañaque business permits and licensing office implement a closure order. —PHOTO COURTESY OF PARAÑAQUE PIO

Fifteen more Chinese restaurants and stores have been padlocked in the past two days in Parañaque as the local government intensified its crackdown on establishments operating illegally in the city.

This brought to 33 the number of Chinese-owned or -managed establishments shuttered by the city’s Business Permits and Licensing Office (BPLO) since June 20, which found them to be operating without the necessary business permits.

“Almost all of these business establishments had no necessary requirements from the city government, local health office, and even from the Bureau of Fire Protection since they started their operation last year,” said Melanie Soriano-Malaya, BPLO chief.

They also violated city ordinances on sanitation code and septage management, and on foreign signages.

A number of Chinese nationals were also working as cooks, waitresses and staff personnel without valid working permits and visas.

Also on Wednesday, the BPLO shut down six Chinese businesses inside the upscale Multinational Village of Barangay Moonwalk.

Mayor Edwin Olivarez said the operations were not meant to single out Chinese establishments.

“This will be a citywide crackdown against erring foreign-owned restaurants and stores. Promise, no ningas kugon,” Olivarez said in a statement.

He also learned that the majority of the Chinese establishments were using Filipino dummies.

The mayor will summon the chairs of three barangays—Jun Zaide of Baclaran, Jennifer Quizon of Tambo, and Roberto Cruz Alano of Moonwalk—next week to explain why the businesses were allowed to be put up.

“[Illegal businesses] should be stopped this early so this could not spread to other barangays in the city. They are paying zero taxes to the city and [their presence] … will not benefit the residents of Parañaque,” Olivarez said.  —WITH A REPORT FROM AIZAM UMAL