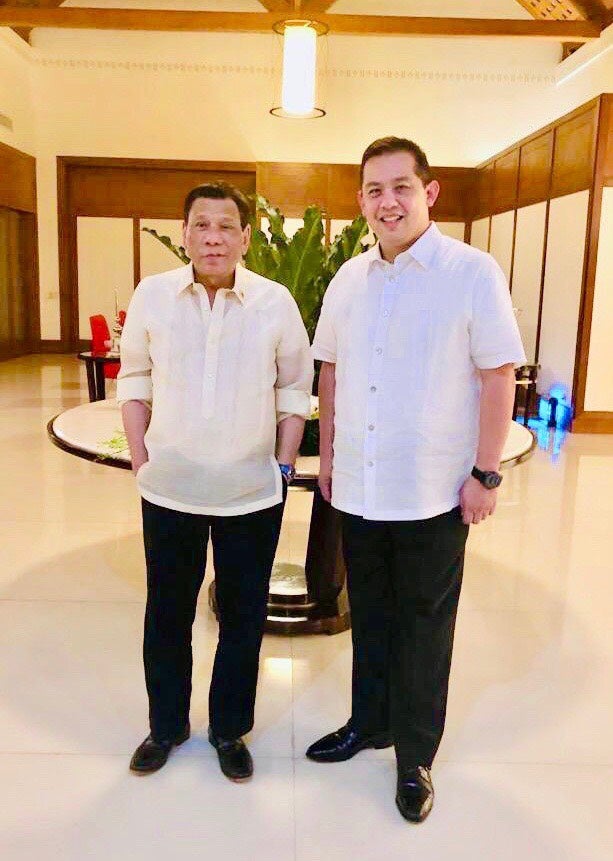 Leyte Representative-elect Martin Romualdez with President Duterte after a private dinner at Bahay Pagbabago on Wednesday. He updated the President on the coalition caucus he led Wednesday morning which was attended by key leaders of major political parties in a Quezon City hotel.

MANILA — Speakership candidate and Leyte Representative-elect Martin Romualdez has personally assured President Rodrigo Duterte of a united House of Representatives that will expedite the passage of all the Chief Executive’s priority bills, especially the 2020 national budget and address the funding requirement of his flagship projects, including the ambitious “Build, Build, Build” infrastructure program.

Romualdez, a lawyer and president of the Philippine Constitution Association (Philconsa), made the assurance in a private dinner with
President Duterte and Senator-elect Bong Go shortly after they attended Wednesday night’s 122nd anniversary celebration of the
Presidential Security Group in Malacañang.

“I took the opportunity to report to him what was discussed and agreed upon by the multi-party caucus hours ago. I assure him of a united
House of Representatives,” said Romualdez, president of the Lakas-Christian Muslim Democrats (CMD).

“I told the President that my fellow congressmen, even before Congress opens session on July 22, have begun working on the measures that need to be discussed ASAP,” he added.

The Leyte solon was referring to the multi-party caucus which he called to discuss what congressional leaders from all political
parties and influential blocs want to be prioritized in the 18th Congress.

The first of the series of caucuses, held at Seda Hotel in Quezon City, was attended by 40 congressional leaders representing PDP-Laban, Lakas-CMD, National Unity Party, Nacionalista Party, Liberal Party, and the Party-List Coalition.

“The congressional leaders are unanimous in saying that the 18th Congress will be a real working partner of President Duterte and the
Executive Department. All vowed to work double-time to shepherd the approval of the President’s legislative agenda,” said Romualdez, head
of the House Independent Bloc of the previous 16th Congress.

“They also agreed to set aside politics and pool resources together to provide adequate funding for the President’s pet programs and projects that have direct impact on our people’s lives. This include the ambitious Build, Build, Build Program which the President want
completed and set in place before the end of his term in 2022,” he added.

In his report to the President, Romualdez said approval on time of the proposed 2020 national budget remains on top of the 18th Congress’
priority list. This, he said, will ensure that government resources are readily available for the implementation of the President’s programs and projects.

“I informed the President that House leaders have already established a reliable communication line with Finance Secretary Sonny Dominguez and other economic managers to ensure that the 2020 national budget will be approved before the end of the year,” Romualdez said.

Besides ensuring that next year’s budget would be enacted on time, Romualdez said the 18th Congress will also ensure
that “the budget will be as fair and as equitable as the President mandates.”

“I also briefed the President about my meeting with Secretaries Mark Villar and Janet Abuel last Tuesday, where I relayed the commitment of
Congress leaders to work on the funding for the President’s flagship infrastructure program,” Romualdez said.

In his consultation with the two Cabinet officials, Romualdez said at least 28 of the 75 projects under the “Build, Build, Build” Program
were identified as ready for completion before the end of the President’s term in 2022.

“The big challenge for the next Congress is how to make that a multi-year appropriation is in place for the rest of the President’s
flagship projects,” he said.

Upon assumption in office in 2016, President Duterte promised to build P8 trillion in new infrastructure including Metro Manila’s first ever
subway, which broke ground last March.

Romualdez explained that his fellow congressmen are in full support of the President’s “Build, Build, Build” (BBB) Program, knowing that it
will help develop industries that will yield robust growth, create jobs and improve the lives of Filipinos.

The government is also aiming to construct four energy facilities that will ensure stable power supply at lower prices; 10 water resource projects as well as irrigation systems that will raise agricultural output; five flood control facilities that will help protect vulnerable communities as well as boost their resilience against the impact of climate change; and three redevelopment programs that will deliver sustainable solutions to best meet the needs of urban population.

Romualdez said items that will be tackled from Day One by the 18th Congress include several priority measures that were taken up in the
Third Regular session of the 17th Congress but were not passed due to lack of time.

“These are the items that we want to revisit and move forward with, along with the separate and specific advocacies of each lawmaker. We
only have very few weeks left, and we want to hit the ground running,” Romualdez said.